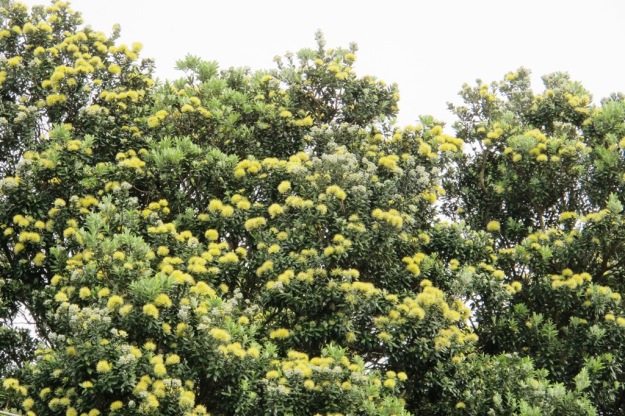 Taonga is a Maori word, enshrined in New Zealand law through the Treaty of Waitangi. At its loosest translation, it means a treasure but more than the European understanding of treasure. It can be tangible or intangible and the transfer of a taonga carries with it great responsibility. It is not to be taken lightly. Unless you are the Taranaki Regional Council in which case you can, apparently, dismiss it out of hand and deny its very existence.

The battle to save the mature pōhutukawa on the bank of the Waitara River has been running for maybe 10 months now. True, the Council has altered its plans. To start with, their consulting engineer said no trees needed to be removed in order to get the flood protection in place. He then changed it to ALL the trees need to be removed – all 125 of the row. The plans changed yet again and the number to be removed was reduced to 23. Such a shame that they are the biggest and best 23 and the reasons for removal are less than clear to most. The Taranaki Regional Council (TRC) has dug their collective toes in, drawn lines not in sand but in concrete and refused all pleas to get a second expert opinion on ways to save the trees while getting effective flood protection in place.

Four of the trees to be removed are yellow – Metrosideros excelsa ‘Aurea’. Pōhutukawa is the Maori name for these trees and the most commonly used. Not only that, but it is widely recognised that these four yellows are of considerable note. Ask any Taranaki horticulturist over a certain age and the first comment they will make is along the lines of: “Aren’t the yellows in that stretch to be felled? Surely they can’t be going to fell those. They are historically very important.”

For it is widely known that the owner of Duncan and Davies (the powerhouse plant nursery of the southern hemisphere from the 1940s to the 1980s), Sir Victor Davies personally organised the planting of those pōhutukawa on the banks of the river and that included the first known planting on mainland New Zealand of the special yellow variety. He was told about the Motiti Island yellow variant in the 1940s. The vast majority are in shades of red and the yellows are a rare sport. His nursery subsequently went on to sell other plants of the yellow selections in later years but it was because they were so special and so unique that Sir Victor Davies approached Sir Thomas Borthwick to plant them in front of the latter’s huge industrial abattoirs (known as freezing works in New Zealand), in order to provide a visual screen to beautify the river and to retain the eroding river bank. That is the Pakeha (European New Zealander) history. 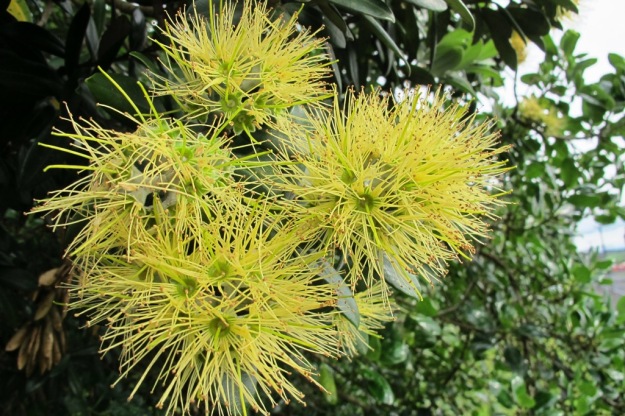 The Maori history of those trees adds another dimension altogether. For the yellow pōhutukawa originated only on Motiti Island which is the turangawaewae (loosely translated to home territory) of Ngai Te Hapu. They knew those yellow flowered trees were special. The decision to allow Sir Victor Davies access to plant material from these trees was made with hapu (sub-tribe) blessing. This is what makes those yellow specimens a taonga – a valued treasure that was gifted. In so doing, it conferred prestige upon the receiver but also an obligation to respect that taonga down the generations. It is a concept that is part of our New Zealand history. Maori need no explanation of what is a strong and enduring cultural value. An increasing number of non Maori New Zealanders also understand and we have come a long way in the last 30 years incorporating that dual heritage of our country.

Some of us have. In fact many of our institutions recognise and acknowledge that dual heritage and the respect that comes with it. So it was a genuine shock to find that the Taranaki Regional Council does not, even in 2015.

Ngai Te Hapu wrote a letter to support retaining those trees, pointing out the status of taonga. The letter was signed by hapu elder, Buddy Mikaere – a man of huge mana (prestige, authority, influence) widely recognised and respected throughout the country. The letter was hand delivered to the TRC with the request that it be tabled at the Executive Committee meeting in six days time. Not only did the CEO and the committee chair refuse to table the letter (it arrived “too late” for agenda inclusion, they claimed – six days in advance), but they felt it appropriate to have a staff member issue a statement denying the taonga status of the trees.

“However, the regional council remains unmoved by Mikaere’s request and removal of the trees will proceed as planned, according to operations director Stephen Hall. He confirmed the council had received the letter but disputed the significance of the Motiti Island link to the yellow-flowered pohutukawa in Waitara.
“There is clear evidence in Duncan and Davies catalogues that they were available commercially for more than a decade in the 1950s and 1960s.
“The tree has been planted at a number of other locations in Taranaki,” he said.” (Taranaki Daily News March 31, 2013).

Pause for breath.
1) The letter has not at this time been received by elected councillors, let alone discussed.
2) Whether the yellow variety has been planted at other locations in Taranaki is a complete red herring, utterly irrelevant to the historical significance of the four river bank specimens.
3) To have a paid staff member speak to the media denying and refuting taonga status declared by a such a respected Maori leader shows a breathtaking lack of sensitivity and process, along with arrogance that is remarkable.

The final word, perhaps, rests with the Auckland person on Twitter who commented: “If Buddy Mikaere says they are taonga then they are taonga. What is wrong with these people?”

If you feel strongly about adding your support to this campaign, please go to Action Station and add your email of concern. It ain’t over til the 23rd tree is chainsawed down and chipped to mulch. 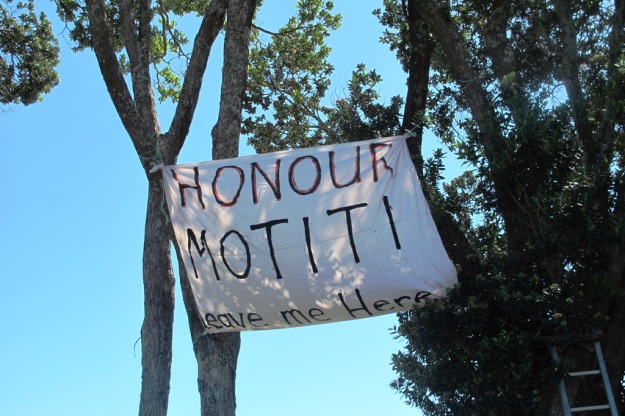 6 thoughts on “Taonga. The Yellow Pōhutukawa on the Waitara River Bank”