Petal carpets! I take great delight in petal carpets. I even have a folder in my photo files designated ‘petal carpets’ and may go through and collate the best for a post later. It is beyond my comprehension that some gardeners try and remove every petal from their lawns. I first read this in a profile of a garden open to the public at a time when Prunus Awanui is in full bloom. The owner proudly proclaimed that he had to rake beneath it twice a day and mow the lawns every day to keep the pristine appearance. All I could think was “why?”

More recently, a friend was telling me he was taken on a tour of a large garden where the owner paused to pick up every leaf and petal that spoiled the appearance of his immaculate lawns. That is what I call fighting nature – gardening in a style where success is measured as a triumph over nature.

This week’s petal carpet comes to you courtesy of the strong climbing solandra vine, S. longiflora, I think. Again. This is an annual event. 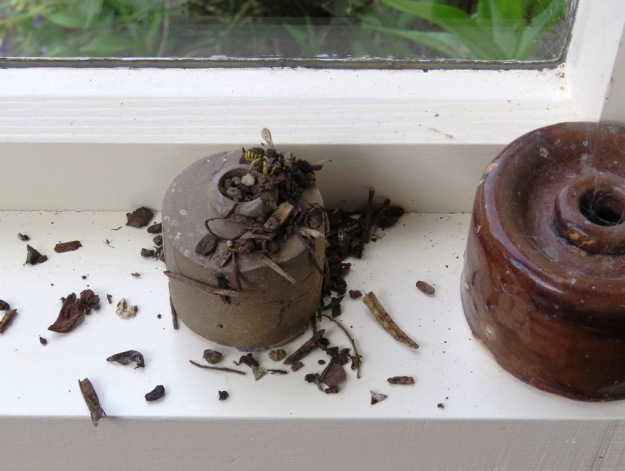 We were delighted to watch a little wool carder bee building her nest in our front porch. First she filled the container with white fluff gathered from around the garden over a period of a few days. Presumably she then laid her eggs in it and then, as we sat watching, she industriously carried in pieces of compost – some larger than herself – in a somewhat vain attempt to cover it over. Then she disappeared. We are guessing the progeny have to fend for themselves when they hatch.

The wool carder bee is a relatively recent arrival in this country. It may not be to their credit that they closely resemble wasps at first glance but they are not the curse that the latter are. Wool carders are solitary bees, the males strongly territorial, and if you are looking closely you may see one working its own patch of the garden while fighting off any intruders. Given the plight of the bees, we are happy to encourage any which will lend their energies to pollination.

On the topic of wasps, Mark is vigilant at this time of the year and has already dealt to over 20 nests. He gets them when they are small and is not the son of his father and nephew of his Uncle Laurice for nothing. Both those men were extraordinarily observant. Mark used to describe his uncle as being like an Aboriginal tracker, such was his intense focus on reading the signs of nature all around him. I rarely pick a nest but the signs are a few wasps entering and leaving from the same spot. I posted a photo sequence earlier showing Mark’s cautious but effective method of dealing to wasp nests without harming other insect life around the place. 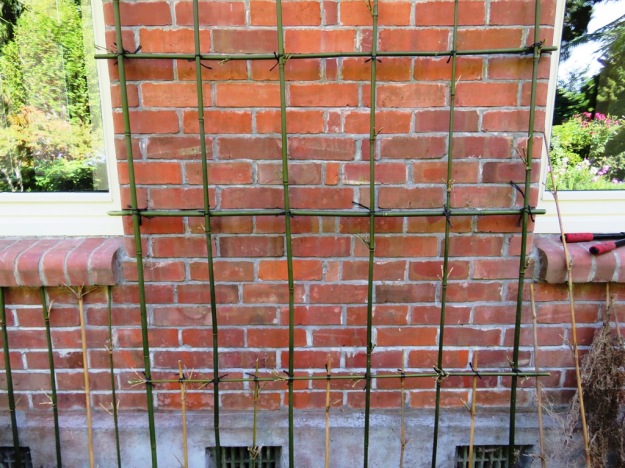 As I harvested bamboo to build wall frames – particularly for the spring appearance of Tropaeolum tricolorum along one wall of the house – I thought both how lucky I was to have bamboo at the ready to harvest and also how every large garden would benefit from something similar. I understand the nutteries of England provide a similar resource for hazel rods.

We have both thin bamboos and giant bamboo growing. The former is a running type which makes it easier to harvest (the clumping varieties have canes growing much closer together which makes it more difficult to get in with the loppers). The latter also runs, which can be a problem because one patch is on the boundary with the farm next door. We like the natural look of the fresh, thin canes when it comes to staking plants in the garden and leaving the leaf axels on means that plants don’t usually need to be tied to the stake. The bamboo only lasts a season or two where it meets the ground – longer in a very dry border under the eaves – but we are not asking them to be permanent stakes. 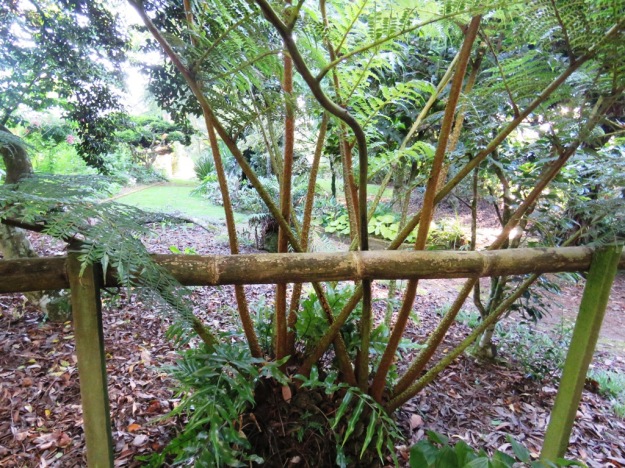 The giant bamboo is harvested for a variety of purposes – washing line prop (where we must get about 10 years out of each length), super long rake handle for pulling out weeds from the larger ponds, obelisks and what Mark calls hitching rails. The latter uses a length of giant bamboo tied to tanalised fencing standards to hold back plants that are engulfing paths – in this case a New Guinea tree fern.

There is much to be said for having wilder areas in the garden which can accommodate plants such as bamboo. 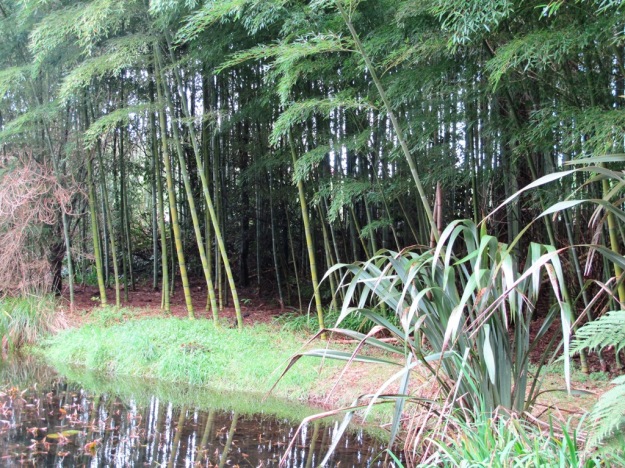