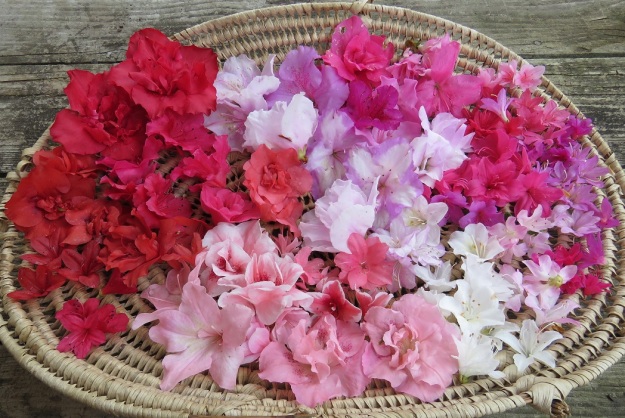 You can have any colour you like, as long as it is pink, white, red, lilac or coral

Evergreen azaleas are a bit of an unsung garden hero, really. There can’t be many more obliging, hard working plants. Generally regarded as playing second fiddle to their more aristocratic rhododendron family members, they seem to have followed their slide down towards oblivion in recent times.  Yet they are such a forgiving plant, tolerant of a wide range of conditions from full sun to almost full shade – as long as it is high shade. They also grow well even where there is a lot of root competition. They can be featured in their own right or they can be a backdrop. And if you have enough different types, the flowering extends for much of the year, though the majority peak for us in September to early October. I tracked the blooms and found the latest varieties still with blooms near Christmas and the first ones showing colour in early March this year. That is a pretty impressive record.

I am on the ‘Mission of 78 Azaleas’. Some years ago, Mark did a cuttings run from plants here and they had reached the point where they really, truly did need planting out. I found homes for about half of them last spring, but there are still 35 sitting out under the shade cloth, looking reproachfully at me and begging to be given permanent homes this winter.* I shall do it this very month. I swear I will.  From this, you may deduce that azaleas are one of our backbone plants in the garden, threaded through quite large areas.

Not only are azaleas forgiving, they are also remarkably versatile. This is a plant family that is particularly revered in their homelands of China and Japan and I could not help but marvel at the bonsai specimen we recently saw in Foshan with a price tag of RMB9800 – which equates to about $2000 in our money! I admired the clipped azalea hedge kept to about knee height that I saw in the garden at Wairere Nursery near Gordonton a few years ago. Last time I visited Hollard’s Garden near Kaponga, it appeared that every last azalea (and they must have a similar number to us) had been clipped to a tidy, tight mound after flowering. This is a style decision and may appeal to folk who prefer their plants to conform to a prescribed standard.

We have taken a different track with some of our larger plants. While slow growing, some can reach a couple of metres in height after a few decades and they can get a bit formless and scruffy. The usual approach is to cut them off close to the ground and let them ‘come again’. Do this sort of hard pruning in winter or very early spring if you want to go down that track. But we like to feature the shapes of our mature plants and to use them to create a middle layer in our garden – lower than the trees but well above ground level. We shape, lift and thin and this gives us an undulating carpet of colour just above head height.  It takes a bit of work. The plants keep shooting from the base so I try and get around each spring and rub off the new growth and I remove any dead wood at the same time. 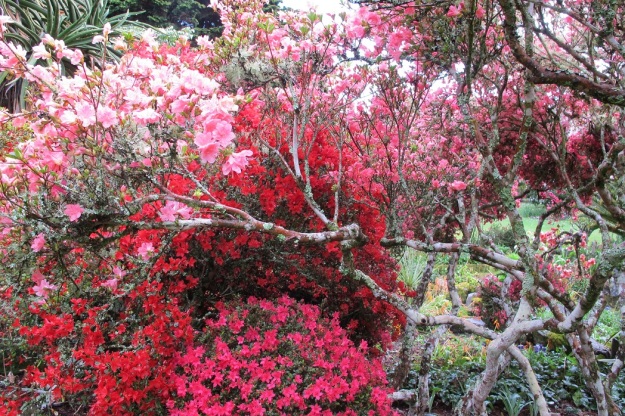 I like to tell the story of a knowledgeable Japanese garden visitor. He came from Kurume and we have a fair number of very small leafed, small flowered Kurume azaleas. He had no English and we have no Japanese, but he managed to convey to us that our Kurumes were simply astounding in their stature and shape but that we needed to take better care of them. He was pointing to the grey lichen infestation in the canopy of a patch growing in full sun. While it is often recommended that you spray for this – lime sulphur or copper is the usual treatment – it is no mean feat to spray above your head height and we are consciously trying to avoid spraying. So I am on a long term campaign – year three into what may be a five year project. In late spring, I manoeuvre my way around on the ladder to take out maybe 20% of the old growth which is most heavily infested, without losing the canopy effect. They do look better for it, but I am grateful that it is only one area that needs this attention.

Evergreen azaleas are much easier to propagate than rhododendrons and are worth a try after the new growth has hardened in summer. Alternatively you can raise seed, as Mark’s father did here to bulk up the plantings without having to buy them. They won’t grow true from seed, but we like the variation we have as a result and the mass of bloom we get is unsurpassed.

Pink Ice is simply lustrous in bloom, but turns to mush in heavy rain. The smaller flowered varieties are more weather hardy.

First published in the July issue of New Zealand Gardener and reproduced here with their agreement.

* Progress is being made. I am down to 24 plants looking at me reproachfully in the nursery.