Would you mess with this cat? Few people ever tried a second time.

The decision not to replace our last cat – when she shuffled off the mortal coils after 16 long years of cantankerous and unpredictable behaviour – was not taken lightly. Both Mark and I had lived with cats all our lives and were fond of the furry, purry things. But they are killers and we prefer the birds. That decision has certainly had a huge impact on our bird population here. It helps that none of our neighbours have cats and that there has been some control exercised over feral felines. This spring, we are particularly aware of the huge number and variety of birds in residence and feeling that we may have achieved something of a sustainable ecosystem which maintains an all year-round population. Mark’s ongoing efforts to reduce rat numbers by trapping may also have helped.

Not even the late Buffy cat could have had an impact on the most exciting arrival this year. It was a kaka – one of our native parrots which is limited to small, defined areas of the country these days, nowhere near here. We had never seen one before. A loud, noisy larrikin it was too, one which enjoyed rarking up the tui, swooping around the place feeding from a variety of sources including the mandarin trees. We were not so impressed at it pulling off fat magnolia buds just to throw around for no clear reason (we did wonder if it was aiming at the tui). After about two months it moved on, perhaps looking for a mate and it has seemed a little quiet here since.

The kereru nest scores about 1/10 for skill and care. Viewed from below. 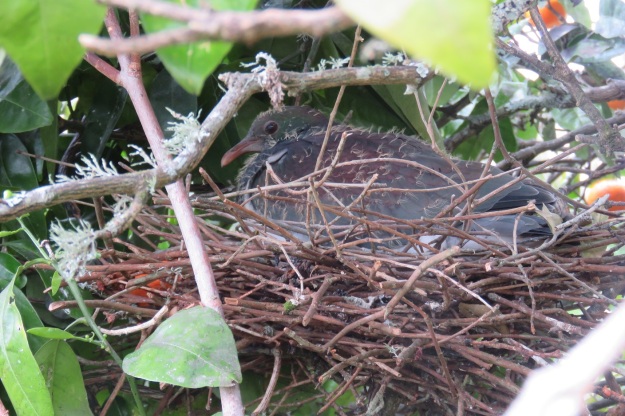 The kereru – our great, lumbering native wood pigeon of small brain –  are a constant garden presence. They also sit about look decorative, posing almost, as they eat the magnolia and michelia flowers and anything else that takes their fancy. Fortunately we have plenty to share. But I thought that few readers are likely to have seen their nests. These are not creations of great skill and care – more a case of throwing a few twigs together and hoping it lasts long enough for the single baby to mature to flying stage. Sometimes the nests do not last the distance, alas. Mark manoeuvred the ladder into position with some difficulty so I could photograph the rather large baby in residence. I will keep an eye on it to see if I can catch the parents coming in to feed it.

What the kereru lack in nest-building skills, the wax-eyes more than make up with their exquisite little creations mere centimetres across. I found this one two days ago in a conifer I was cleaning out (removing the clutter of dead needles improves the look and air circulation enormously). The hatchlings were so tiny that at first I thought they were berries that had fallen into an old nest and my eyes had difficulty focusing on the minute movements that showed they were living. I backed off immediately. Finishing the grooming of the conifer will have to wait. Two days later, today, I checked again and the babies are now looking up with their mouths open, waiting to be fed.

Trapped on the inside – Californian quail

We would not have the mob of quail that have built up, had we kept a cat. They spend most of their time on the ground and they usually nest at ground level, then lead their babies around from the earliest stage when they still look like little feathered bumblebees, long before they are big enough to fly. I could, however, have done without the two who wandered into my office one night when the door had been left open by mistake and who then could not work out how to exit.

I haven’t even mentioned the pair of white-faced herons currently nesting in the Pinus muricata yet but neither have I been around with my camera at the right time to photograph them entering or leaving the nest which is maybe 30 metres up.  We are hoping that the cretinous man who shot two white-faced herons in the area because they were stealing his goldfish (!!!!) is now too old to still be wielding a gun. I can, however, give you the young pukeko separated from its parents down in the North Garden – and very agitated they all were by my presence there with the dog. These native swamp hens that rarely fly far are wonderful exemplars of survival and adaptability and therefore so common that they are taken for granted and never given the status of their highly endangered cousins, the takahe.

One of the bonuses of having a garden filled with birdlife is that we do not have much of a problem with slugs and snails. As far as we are concerned, good gardening is about establishing good eco-systems as much as it is about pretty flowers.

We once had a much-loved ginger cat called Moomintroll (or ‘The Troll’ for short). He lived to a ripe old aged despite two broken legs in kittenhood, the second requiring amputation. From this misfortune, I learned that three legged cats are good rodent catchers but can’t get the elevation to catch birds. I did wonder about putting a standing order with the local SPCA for a three-legged cat but there is a problem. All our cats have always been ginger, male or female. As far as I am concerned, all cats should therefore be ginger and a standing order for a three-legged ginger moggy who is confident living with dogs might be altogether too specific. We will stick with the birds.