I love cats. But when our last cat was in her twilight years, Mark commented that he did not want another. I felt a twinge of sadness, resentment even. But I knew he was right and these days I make do with the cats of the internet. 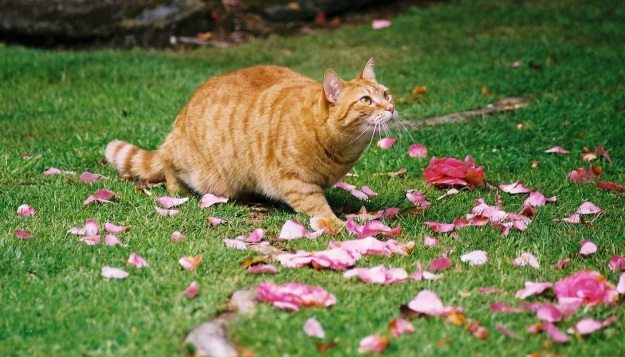 In our years together, we have had a succession of furry felines. Every one was both loved and ginger, male or female. To me, all cats should be ginger. Buffy, our final cat, was named by the children for the vampire slayer. She took her name seriously and slayed not vampires, but rodents, probably skinks, birds in abundance and she gave no quarter to visitors who thought they might stroke her without permission or – horrors – move her from a chair that they might sit there instead. Buffy met the world on her terms. And she was a killer.

If we still had a cat, we would not have the ground-dwelling quail

I believe Gareth Morgan when he says all cats are roaming killers, contrary to what their owners think. The hidden cameras prove him right. Urban cats may not achieve the same tally of bird kill but that is likely to be because of a lesser population of birds. We live rurally with no domestic cats in residence nearby. Mark maintains an ongoing rodent control programme, particularly against rats, and is on constant alert for other predators, including feral cats. We can never be predator free, but vigilance keeps the incidence lower than the norm.

The rewards lie in the bird population. Everybody I know claims their garden is ‘full of birdsong’ and we are fortunate that there is a certain base-level bird population throughout most of the country. A friend who recently moved from a very large, cat-free country garden to a leafy town suburb commented how much she missed the birdsong. I bet if you asked her neighbours, they would be shocked and think this a gross misrepresentation. But the difference between that base-level population and an environment that is truly rich in bird numbers and variety is huge.  These days, our garden feels so alive.

Our beautiful but lumbering native pigeon – the kereru

We have never set out to feed the birds. But on a property which is heavily planted in both natives and exotics with many different varieties, particularly flowering ones, across 25 acres, there is a succession of food all year round.

It is not that we have much in the way of rare birds, although the arrival of a kaka for two months in late winter was a thrill and we are on the feeding flight path of native falcons (karearea).  Mostly it is about the tui which we count by the score, the kereru that are permanent residents here, korimako (bellbirds), ruru (moreporks) at night, piwakawaka (fantails), white-faced herons, silvereyes, pukeko, shining cuckoos in season and all the formerly common birds of our bush and grasslands. Then are the introduced varieties. It is one of the delightful introductions that we know we would miss entirely if we had a cat. The Californian quail spend a lot of the time on the ground and nest at ground level so are extremely vulnerable to predation. These are charming additions to the garden, a gentle presence all the time. We do not eat them.

The one grief for us is the incidence of bird-strike on our windows, exacerbated by double glazing which turned the windows almost mirror-like. Because the reflection is all of sky and trees, too many birds think they can fly through. Window decals do not work. Believe me, I tried. A young kereru still died when it flew straight into one. Mark constructed an open bamboo grid that he suspended from the eaves in front of our very large picture window which claimed too many birds. It does not impede the view from indoors and we can still open the windows. Upstairs was more problematic because we lack eaves. Reluctantly – and I say reluctantly because we like the views – we have hung sheer curtains in the two worst affected rooms. These work – Mark has seen a young kereru take avoiding action when it registered the visual barrier. 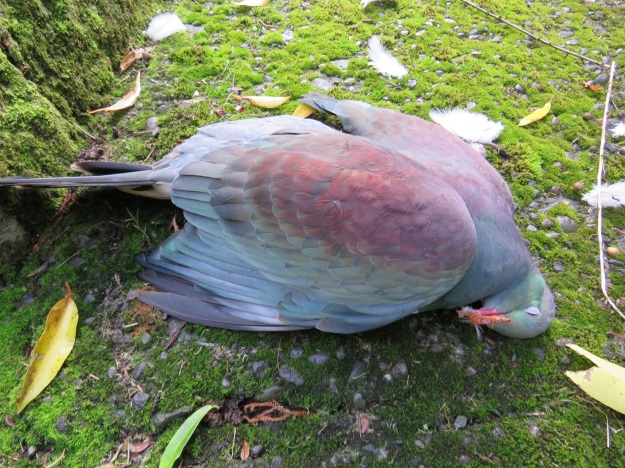 The grief of window-kill kereru

We place a high value on creating a sound eco system and the increasing bird population tells us we are succeeding. It is not just the birdsong. It is the movement, the interaction between the birds (we witness many a battle), the charm of different nests, even the falling feathers – all enrich our lives well above and beyond just having a garden. If the trade-off for us is forgoing the character and pleasure of a resident cat, then so be it. We would rather have the birds.

First published in the February issue of New Zealand Gardener and reprinted here with their permission.

3 thoughts on “For the sake of the birds”