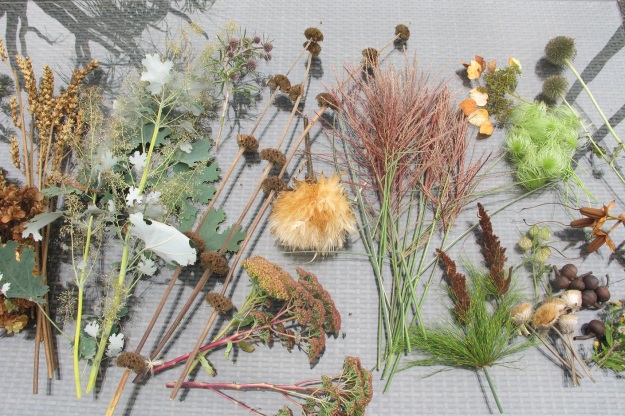 As the nights cool and day length shortens, there is no denying that autumn is here. Coastal Taranaki is not renowned for autumn colour. It is generally drier climates with sharp seasonal changes of temperature that get the showiest displays. The trees we have that do change won’t be showing much until the end of May and into June. In our climate, the shoulder seasons of spring and autumn are extended in time but at least it means the depths of winter are but brief.

I did a round-up of flowers one year to see what was actually in bloom at this time. We think mainly of our rockery which has a second peak with the showy autumn bulbs (those that are triggered into growth by summer rain) but I see I managed to gather flowers from 40 different plant genera across trees, shrubs, perennials, annuals and bulbs and that wasn’t including the last gasp of plants well past their peak season. We are blessed to live in a mild climate where plants grow and flower all year round. 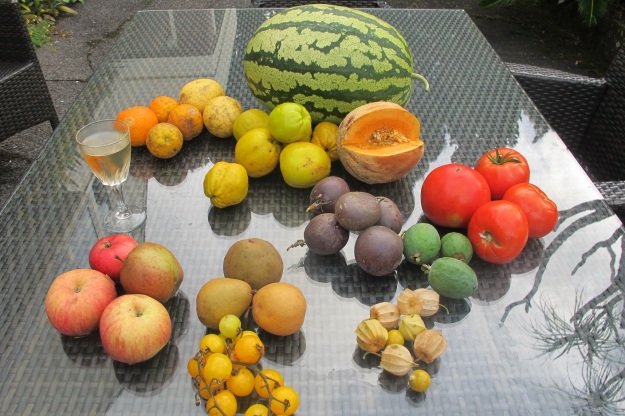 Despite all that, it is a time of year that brings out the Squirrel Nutkin in me. Or is that the Laura Ingalls Wilder of The Little House on the Prairie fame? There is something visceral in preparing for cooler months and achieving a state where I know there is enough firewood to keep us warm and food supplies stockpiled against winter famine. Not that I grow the food crops – that is Mark’s domain. And indeed, the supermarket is only 10 minutes’ drive away but that is never going to be as satisfying as seeing the home produce rolling in. April is all about chestnuts, gathering walnuts, drying beans, sorting the apples and pears, gorging on rock and water melons, freezing tomatoes and corn, harvesting grapes and the like.

In recent years, I have turned my attention towards the quiet charm of seed heads. This is the influence of British gardening media. They come from harsher climatic conditions where growth stops in winter and a preponderance of deciduous material means that the winter garden often looks, well, let’s be honest – dead. Their gardeners are urged to leave seed heads in place until spring as a major source of food for birds and wildlife. Dying of starvation is apparently an issue in colder climates.

There is far more discussion about the contribution domestic gardening can make to sound eco-systems and environmental management in British garden media. It is a conversation I have yet to see in this country where we are more likely to assume that any form of gardening makes a worthwhile contribution to nature – which is not necessarily true at all. It is time we questioned some of our practices like pouring on fertilisers, routine spraying, irrigation and lawn management but we can at least let some of our plants go to seed for the birds.

Not all seed heads are precious, I admit. I try and dead head our roadside agapanthus in the interests of public reputation (though as they are heavy seeds, they don’t spread far from the parent plant). There is a limit to how many crocosmia and tigridias we want so I dead head those. Some rhododendrons will seed themselves to death if not dead headed after flowering. And some simply have no aesthetic merit. Given that our feathered friends have enough food all year round here and many of our native birds are fruit and nectar feeders, I don’t feel obliged to keep everything intact for them in situ.

Rhododendron – one of the sino nuttalliis

When I analyse the seed heads I have photographed over the years, it is the perennials, including the grasses, that are the highlights. A few of the trees and shrubs are exceptional – particularly rhododendrons. But the graceful plumes, the fluffy pompoms, the flat heads that create silhouettes against the sky, the swept-back hairdos mostly come from perennials. The silky seed heads of the clematis are often as pretty – in an understated sort of way – as the flowers themselves. Hibiscus trionum also has exquisite seed pods with a beauty all of their own. I leave the tiered phlomis blooms on the plants until early spring because they keep their form and hold themselves erect.

Sometimes I cut a few seed heads to bring indoors but, like hydrangea heads, they soon start to look somewhat forlorn and dusty to my eyes. Autumn can be melancholy enough without bringing it inside. But in the right place, these attempts by the plants to ensure their survival into the future can also create little cameos of detail which are delightful to look at. 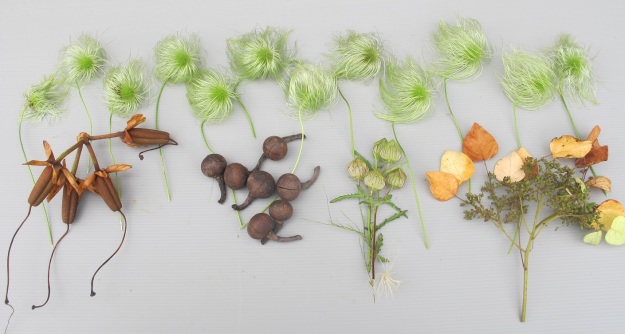 First published in the April issue of New Zealand Gardener and reproduced here with their permission.

2 thoughts on “The slow autumn fade”