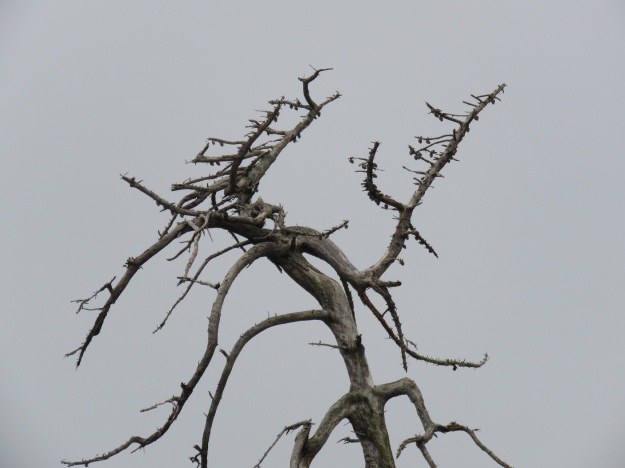 Mood photo as we wait in the calm before the storm. It is the neighbour’s dead tree

It has been a discombobulating day. Since late yesterday, the entire country has been subjected to saturation warnings about the impending Cyclone Cook. I have never seen such a massive advance warning campaign and mobilisation of emergency services prior to an event happening. Be prepared, we have been told, for the worst weather event in the last 49 years. This includes urging us to have at least three days of food and drinking water to hand, to have prepared our own personal evacuation plans – including pets, not to plan on travelling anywhere until the storm has passed even though it is Easter, to tie down trampolines and to put away anything that can be blown around, including the outdoor barbecue.

So this morning has seemed quite unreal here as the weather has been dead calm, quiet and grey. Only now are the rains starting in Taranaki, although the east coast is getting heavy rain falling on land already saturated from last week’s downpours. The cyclonic winds have yet to arrive. I think they are due this evening.

(Post cyclone update – it hit the east coast. We are on the west coast so escaped everything but rain. Not as devastating as feared though there are plenty of roads closed, trees down and power lines down in the eastern areas.)

The shades of nerines currently in bloom

In the meantime, summer has long gone here. Every season has its own rewards and autumn brings us the nerines. In the company of Cyclamen hederafolium and the other autumn bulbs, they are a highlight every year. Less predictable are the brunsvigias which don’t bloom every year for us. The first to flower this year, I was reliably informed on Facebook, is not, as we had thought, one of the species but in fact an amarygia – a hybrid between Brunsvigia josephinae and an amaryllis (otherwise known as a belladonna). So now we know. 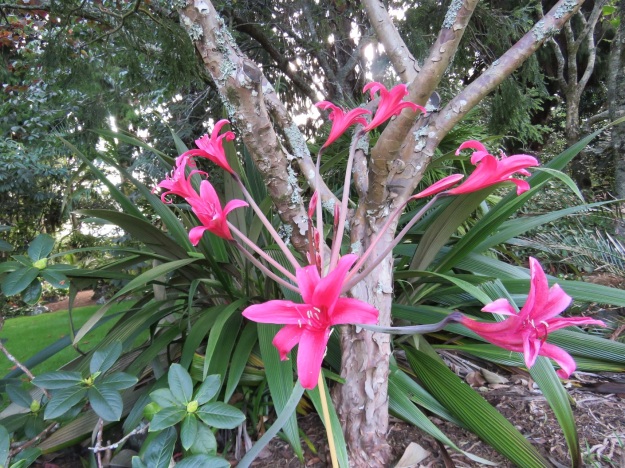 The second one, opening now, is Brunsvigia litoralis. I counted 36 individual florets ready to open – which they will do in sequence over the next few weeks.  These are more South African bulbs where the growth is triggered by summer rain.

Autumn is also feijoa season. I keep optimistically checking beneath our trees but our fruit have yet to start dropping (the sign that they are ripe). This is a curious fruit that central and northern New Zealand seems to have made its own, despite its South American origins. It is one of the few fruiting trees (though a large shrub, really) that can be planted and just left without any further attention. It thrives under benign neglect. In fact it crops so well that it can lead to an edge of desperation. I saw a tweet the other day from somebody who bought a property with seven feijoa trees on it “and now I pick up 20kg every two days which I try to give away”. It is feast or famine with feijoas. They have a short shelf life so are not a good commercial option but almost everybody seems to grow them so rehoming surplus can be problematic. That said, if ours don’t start falling in the next day or two, I may have to buy a bag from a roadside stall I passed the other day. 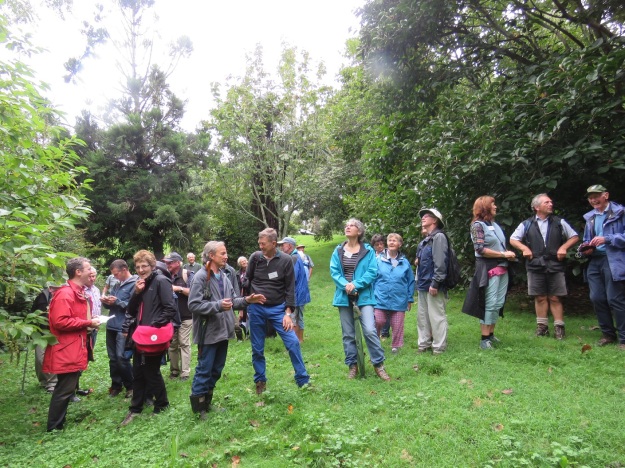 With our garden closed to the public these days, we don’t accept many tours or groups but the New Zealand chapter of the IDS (International Dendrology Society) was an exception a few weeks ago. Of all the horticultural societies we have encountered over time, the IDS remains our favourite. It attracts the most interesting and knowledgeable people and we really enjoyed their visit. There were 50 in the group and they ate lunch here.

A very small volume of non-recyclables on the right

I show you the waste because I find this very affirming. I put out three receptacles labelled compostable, recyclable and non-recyclable. The right-hand pot of non-recyclable waste was barely a quarter full. All credit to the caterer who set up a situation that generated next to no waste and to the group who were happy to cooperate. Over the years, we have hosted many groups and the volume of waste left behind used to be a real problem for us when we didn’t have a rubbish collection service. Now we have that service but we don’t really need it. It is possible for a large group to move around, eating and drinking on the go, and not leave a whole lot of inorganic waste to mark their passage. This is a good sign. At least, I think so because these things are of increasing importance these days.

3 thoughts on “Tikorangi notes: the calm before the storm”