At the altar of the motor car

I have nothing but admiration for the lead Britain’s Royal Horticultural Society takes on public education on matters related to plants and the natural environment. And boy oh boy, the  paving front yards to accommodate cars is a huge issue. One in three front yards is paved, they say. This is not unique to Britain. Every western city probably has a similar situation.

The alternative suggested by RHS

Does it matter? Yes. It matters in many ways. Out of pure self interest, the paving enthusiasts of this world should worry about increased flooding. The earth is like a giant sponge that absorbs and filters water. If large areas are paved, the water is then channelled to a limited number of collection points which can’t cope in times of heavy rain. No matter how much one rails at the local council’s inability to deal with flood waters, there are limits to what can be done when water is being turned into a flowing torrent rather than being absorbed into a wider flood plain. Channelling it to flowing water also stops the natural filtration that operates through earth’s own systems so all toxins and pollutants are being headed straight to waterways.

The environmental benefits of growing plants are perhaps a harder concept to sell to people who don’t see anything wrong with living in concrete jungles. But we ignore the evidence of declining insect populations and the loss of biodiversity at our peril. Our planet is hitting crisis point, fuelled by human ignorance.

Twenty six years ago, I went to Britain on a study bursary as a Commonwealth Relations scholar. Many interesting things happened on that trip. That was how I once ended up in Belfast as a guest of the Irish Information Service at a time of high tension during The Troubles. Also, the House of Lords to listen to a famous debate about the smokies from Arbroath. As part of a fortnight hosted by the Foreign Office, we had many briefings including one from a senior government official who proclaimed, “Britain leads the world in conservation.” I hope I kept my snort silent. At the time, New Zealand really was pretty clean and green and Britain could not have been a sharper contrast. I was deeply cynical. I am not now.

We have heard and seen far more discussion at the most local and personal level about environmental matters in the parts of England we have visited. There is an awareness of the importance of green space, of trees, hedgerows, ponds, wild flowers, meadows and gardening that leaves us for dead in New Zealand. We have seen little back gardens that are set up as mini nature reserves. It may all be too little too late in global terms but at a personal level, I think it is important to daily life. 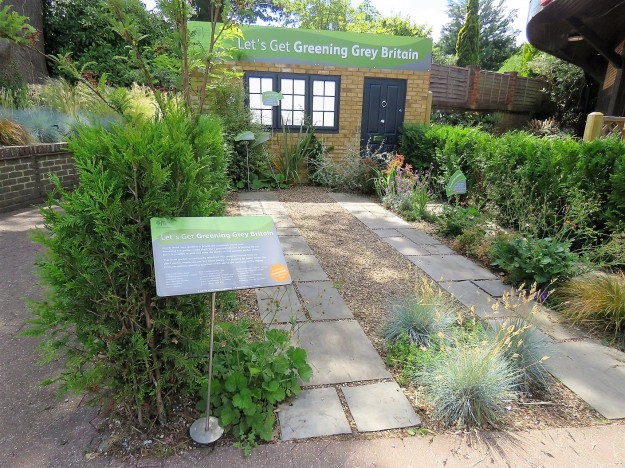 It is not that the RHS are the only body leading public education in this area, but they are an influential one and all power to that.

8 thoughts on “Greening the Grey”