I have just returned from ten days across the Tasman. A mother’s tour of three state capitals, I describe it. Mark and I have three children all of whom are now living in different Australian cities. So to visit them involves a tour from Sydney to Canberra to Melbourne.

While in Canberra, Elder Daughter took me to the final day of Floriade. This is a major community and tourist event for the area with an emphasis on the tulip, backed up by annuals and the Dutch iris in support roles. It is a living flower show and is open for a whole month. The ever-handy internet tells me it involves the planting of more than a million bulbs and annuals across 8000 square metres. It is free entry which is pretty remarkable. There are a whole lot of ancillary activities – performances, cultural celebrations, traders, workshops and the like but beyond buying an icecream each, we took little notice of these. 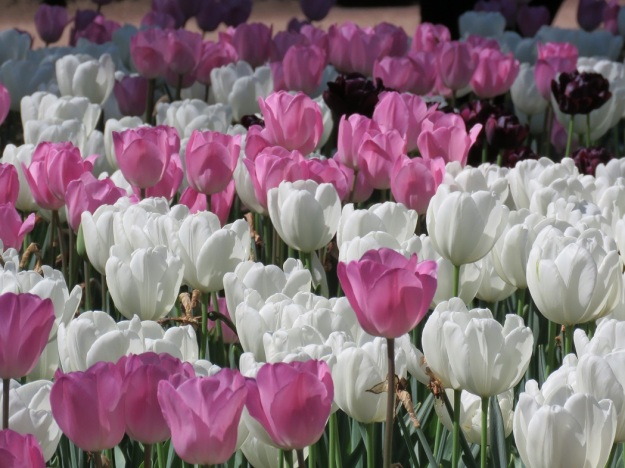 I admit I am not the world’s greatest fan of the tulip, let alone massed displays of them. They are just a little … stiff, maybe overbred for my personal taste. But I am quite happy to acknowledge that I am a minority in this opinion and that others have great fondness for the genus. Or at least for the OTT displays often created using massed bulbs of the genus. And it would take a churlish disposition to find fault with this very pretty pink and white display.

It didn’t take me long to work out that Floriade has nothing to do with gardening. It is high level, very competent horticulture. Keeping a display going for a full month requires good skills, especially given a climate which can move from a very cold winter with late frosts to temperatures that we would regard as high summer at home, all in the space of those thirty days. There are many reasons to visit, but gleaning inspiration for the home garden is not one.

However, it is a great place to see colour theory in action – how hues of similar tones create a visual carpet of colour while certain combinations will make the colour pop. I was particularly taken by the blue bed and realised how much I respond to those shades. 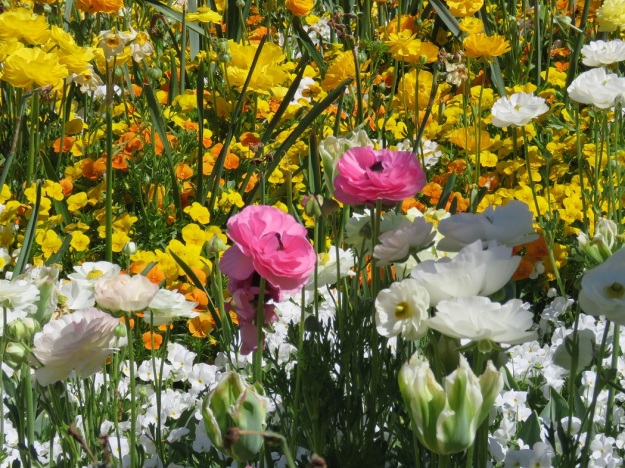 I liked the occasional incident of a colour rogue – a plant that is quite clearly the wrong colour. I liked even more that these rogues had not been rooted out for ‘spoiling’ the display. My late mother used to make large rugs by hand. She was not a perfectionist but would often say that any errors were following tradition – that perfection was seen as a challenge to either the gods or God, and that the traditional rug-makers always put at least one deliberate mistake into their work. I have no idea now whether this is true let alone which religion she was referencing – possibly Islam, given the geographic location of rug-makers? The rogue pink ranunculus made me smile and think of her. 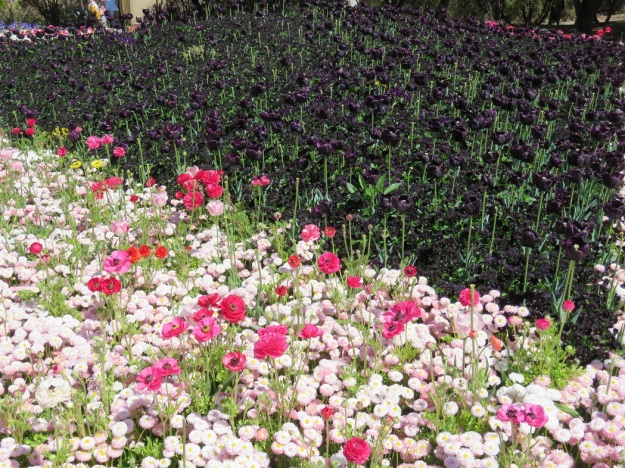 I took this photo to try and convey the flat, anticlimactic nature of black (or very dark) flowers. Mark has always been offhand about black or indeed green flowers which he sees as novelty blooms sold on the strength of individual flowers when viewed close up, not on visual impact in the garden. And he is right. All these very, very dark flowers just looked lifeless and dull en masse. They are black pansies and dark to black tulips. 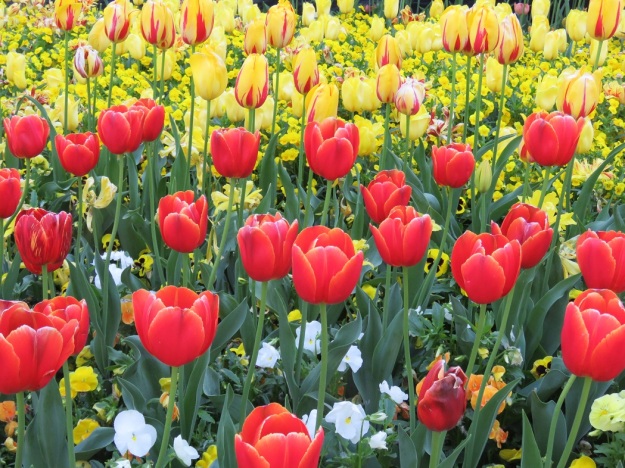 Elder Daughter is clearly our offspring. She was considering the disappointing waste of wrapping up the show when the beds are all stripped out and the bulbs and plants presumably become compost. She felt that if they could delay the exercise of reinstating this inner city parkland for a further six weeks or so, then they could sell tickets for $10 each and allow locals to come and dig up the bulbs to take home. She felt she would be photographing the bulbs she really liked so she could locate them when they were starting to go dormant. At least the flowers are all picked at the end of the show, to be delivered to hospitals and care homes around the area, I was told.

Again, I posted an album of additional Floriade photos to Facebook. For anyone who, like a Dutch friend of mine, still thinks tulips originated in the Netherlands, I wrote this piece earlier. Short version: they didn’t.

For the devotees of white

9 thoughts on “Tulips from Floriade (as opposed to Amsterdam)”