High density living amongst the trees in Sydney

In the week before I left for Australia, I had seen coverage about the loss of trees in Auckland. The loss of up to one third of all Auckland’s established trees, in fact. That is an astonishing number to have been removed  in the last five years. Too many New Zealanders hate trees.

It was interesting to hit Sydney and Canberrra where temperatures were rising rapidly for summer and to hold conversations with people who value trees a great deal more. I was told more than once that good tree cover in the city can lower the temperature in summer by as much as two or three degrees, making the leafy suburbs much more liveable. And the whole term “leafy suburbs” is used to describe the affluent areas. Sadly, the more down market the area, the more barren and treeless it tends to be. 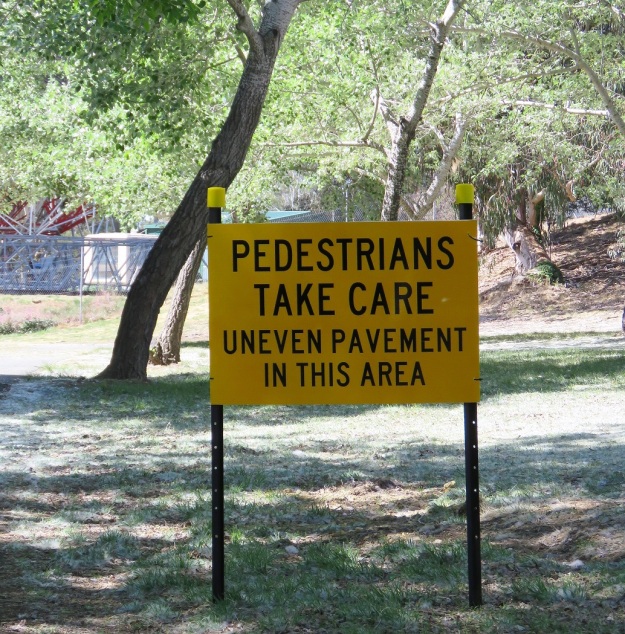 I photographed this sign in Canberra but ringing in my ears were the cries I often hear in our local city of New Plymouth to fell trees where the roots are starting to lift the seal. It is a curious fact that as soon as this occurs, legions of people suddenly speak up for the welfare of the elderly who, in our local area at least, are allegedly incapable of coping with an uneven surface. Having travelled in Asia, Australia, Europe and the UK, I can assure you that a bit of lifting or cracking of seal is NOT seen as a reason for removing trees in those places.

My second daughter gave me food for thought. She bought a third floor apartment with a good sized balcony overlooking a very busy road. In a densely populated area of Sydney, there are only about three apartments out of many (but I failed to count how many), that can see onto her balcony. It is amazingly private and that is due to the trees, both the street trees and the elongated Magnolia grandiflora ‘Little Gem’ that are on the apartment property.

The street trees are huge. It is a ficus outside her place. And yes, the roots do get into the drains. Just before she bought her apartment, there had been a major repair required on the building’s main sewer pipe. If this happened in New Zealand, the resulting cries for the removal of the offending tree would be deafening.

“Would I have bought this apartment if the trees weren’t here?” Daughter commented. “No. Not a chance. It is the trees that make the busy road and being overlooked bearable. Maybe repairing the underground pipes from time to time is a price I have to pay for living here.” That is NOT a New Zealand sentiment!

Yes trees can cause a lot of damage in storms and when the roots penetrate pipes and crack sealed areas. But never before has it been so important to keep our big trees in urban areas and cutting them down to replace them with shrubs or small, suburban trees which are never going to get much above three metres is not an adequate substitute. Trees generate the very oxygen we breathe as well as contributing to ecosystems and the environment.

Elder daughter drove me round new Canberra suburbs. With typical over-sized freestanding houses on small sections, there is no room for big trees to be planted on these private properties. That is where town planning to allow for plantings in public spaces becomes so very important. If big trees are not established on road verges and in neighbourhood parks, such subdivisions will forever be barren wastelands of concrete and brick. As well as up to three degrees hotter on scorching summer days. 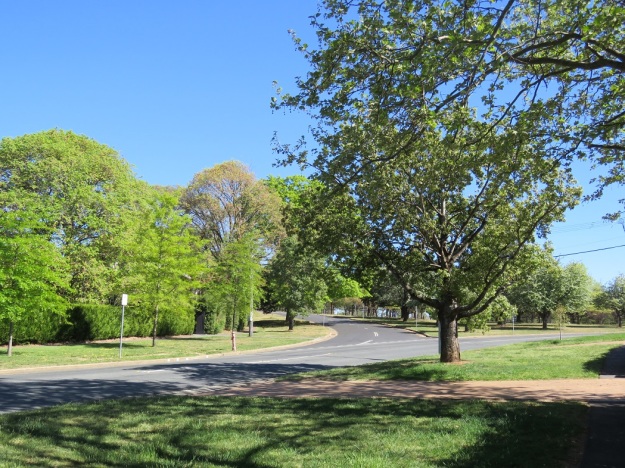 The established – and higher priced – leafy suburbs of Canberra

The established, older areas of Sydney, Canberra and Melbourne all have B I G street trees and how lovely that is to see. It is time for Auckland to rise to the challenge of planting more trees rather than felling them in ever increasing numbers. Planning is critical to create sufficient space for trees to be able to reach maturity. And time for all New Zealanders to cast aside the pioneer mentality that trees merely exist for humans to fell them.

If you don’t have trees, then you don’t get to experience the opening of the first flowers on the jacaranda. In Sydney. In October. Ours at home won’t bloom until February.

8 thoughts on “City trees. An asset, not a liability”