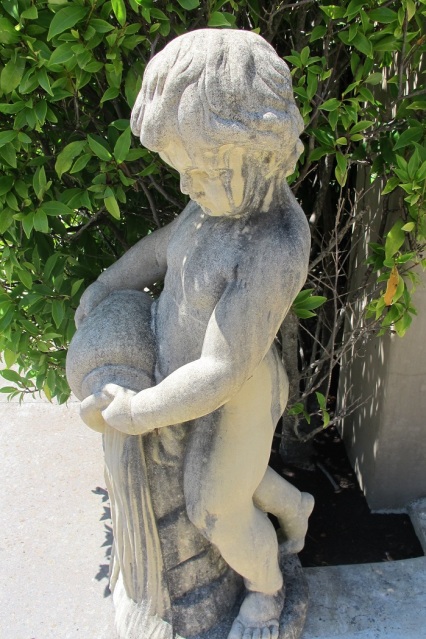 In an Auckland garden

Sunday mornings here are not for lying in and relaxing. My weekly radio spot with Tony Murrell on Radio Live sees to that. It takes quite a bit of thinking our way into the topic of the day and this morning we were talking about classical statuary and whether it has a place in New Zealand gardens.

Of course it has a place here. If you like classical statuary in your own garden, go for it. It is your garden so do what you like and enjoy. And stop reading here because I am not so keen on it and that is for historical and cultural reasons as much as the aesthetics. 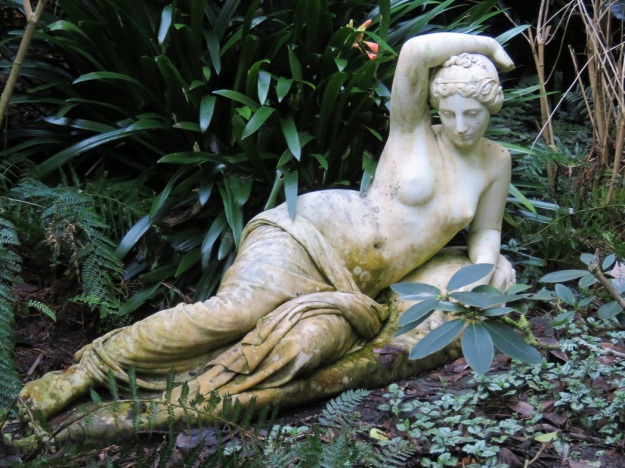 I have only been to Greece once and that was to the limited area of the Dodecanese island chain but I have seen Greek originals in the British Museum. The Elgin Marbles, in fact. I struggle with British museums. On my first and only visit to the Victoria and Albert Museum in my late thirties, I was gobsmacked at the sheer quantity of treasures from around the world. But I have never managed to shrug off the queasy feeling that what I was viewing was theft, acquisition and the dominance of a ruling empire on a grand scale. Pillaging. It is the same with the Elgin Marbles which should in fact be referred to as the Parthenon Marbles. And I still feel that the use of classical reproductions that have no relevance at all to this country is somewhat a case of cultural misappropriation from the same tradition that stocked those museums of Britain. But feel free to disagree with me on that political opinion. 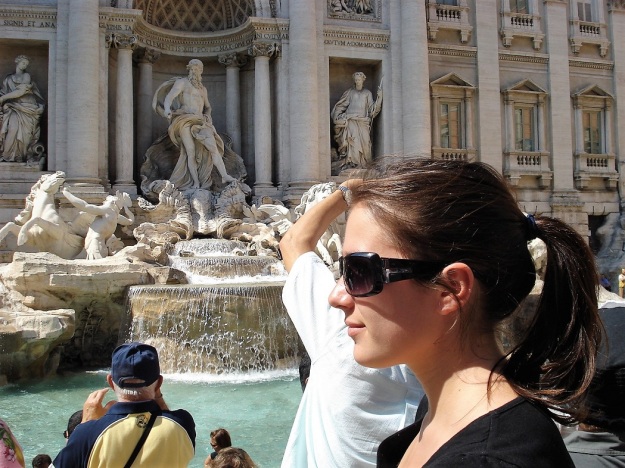 Baroque glory at the Trevi Fountain in Rome. The lovely dark haired young woman at the front is she whom I often refer to as Second Daughter, to preserve some level of anonymity (I rarely use photos of family here).

I have been to Italy more often and have seen a fair amount of sculpture, both original and more recent re-creations of lost originals. I will never forget the emotion of awe at seeing Bernini’s work close up at the Borghese Gallery. The rendition of human flesh and bone was so breathtakingly realistic I found it incomprehensible that it was sculpted from cold marble.

I am no expert on the traditions of sculpture that have given us the so-called classical statuary and a fair smattering of fountains in New Zealand gardens, but it occurred to me that they could be loosely classified into three different periods. 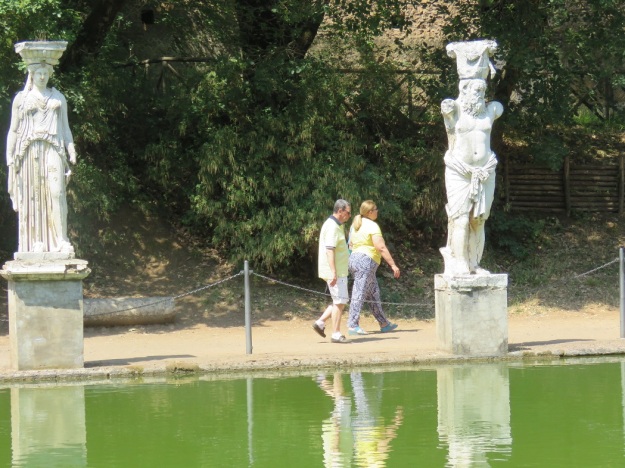 Villa Adriana in Rome but these are modern re-creations of classical statues. And a distinctly modern couple in the middle.

The first wave originated in ancient Greece and Rome where they were part of religious traditions, public art and a display of wealth. These were often the beautiful simplicity and grace of form that we associate with classical times. The second is the Baroque era of the 17th and 18th centuries, particularly the point where it became even more extreme with the over the top Rococo style (as exemplified in the Trevi Fountain in Rome). It continued to use the classical figures of the ancients while still rooted in a wealthy, religious tradition but with much more flamboyance and ostentation. 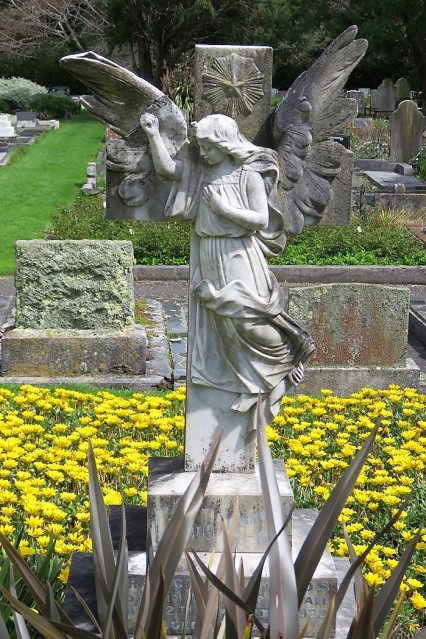 The third strand I see must surely date back to the pre-Raphaelites of 1840s England with their nostalgia for the pre-industrial era and the desire to bring back romanticism. At its best, some of that domestic style of romantic statuary is charming. More often, I see it crossing over to Victorian sentimentality. Mawkish, even. My theory is that it is pre-Raphelite amalgamating with Victorian sentimentality that most often decorates our old graveyards.

The bottom line with the original sculptures is that they were all conceived by sculptors – practicing artists. What ends up in our gardens does not have this origin. They are derivative reproductions of varying quality, depending on the budget. And in New Zealand, there is no cultural connection to the ancient traditions. However, it could be argued that the pre-Raphaelite influence has an echo in our past, given that the British early settlers were coming from Victorian England. And that romantic look is far more domestic, personal and better suited to a smaller, private garden.

We have not gone in for statuary in any form in our garden. Overall, we are very lightly adorned compared to most. Part of that is because this garden was created with the smallest of budgets at the time. More recently, both Mark and I feel that garden decoration, statuary or sculpture must be relevant to us personally and to our environment, both the physical and the cultural environments. So classical statuary will not find a place here.

The pieces I have admired, I realise now, are more likely to date from the pre-Raphaelites. I would like to own the female figure from Gresgarth garden (above right). At least, I think I would. That garden is in the north of England and I remain uncertain how this style would transfer across the world.

The modern sculptures in the Barnett garden near New Plymouth are surely an artist’s extension of that domestic, romantic tradition of figures. The two children have an edginess to them with that slightly unnerving balance of pose. I really like them. They are relevant to a garden that is strongly family and leisure-oriented. For me, they speak far louder than any reproduction classical statue can ever be expected to in a New Zealand context.

Judging by the plethora of statuary I see in gardens here and for sale in garden centres and other purveyors of gardening bric a brac, mine is a minority opinion but I can live with that.

As a postscript and loosely related at best, I will never forget a conversation with a colleague in my teaching days. We were both young, married and female but there the common ground ended. I was of the hippie persuasion while she was prim, proper and religious. I have no idea how we got onto the subject of art in the bedroom but she declared that they could never have a picture of people in their bedroom. It had never even occurred to me that the bedroom was a place for landscapes and still life paintings only and that a two dimensional representation of the human body could be an invasion of personal privacy. Be careful what you do in front of your garden figurines. They may be watching and judging you.

For an earlier post on related thoughts, I wrote about ‘prole drift’ in 2011.

And should you happen to own a garden with several, maybe even many, examples of European statuary, be very afraid that you may be judged as a godwotter.

7 thoughts on “Classic style statuary in New Zealand gardens – yes or no?”