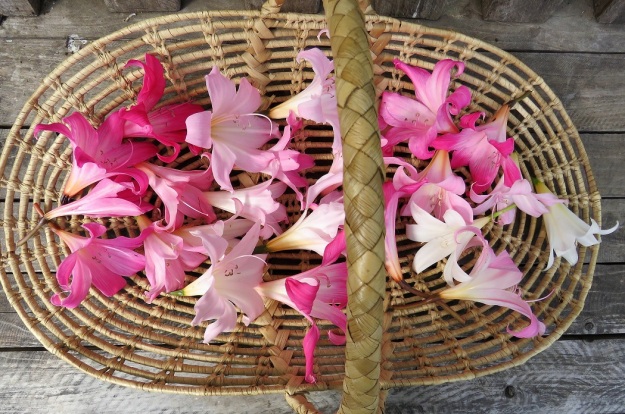 Needing a break from a garden task, I wandered around with my flower basket, curious as to how much variation there is in the belladonna flowers still in bloom, given that ours are all seedlings. A fair amount, it turns out, in colour and size. This was not an exhaustive survey into the average number of blooms per flower spike, variations in flower form and length of time in bloom. There are limits to how interested I am in this particular genus.

Paler hues – 3rd from left has quite a sweet picotee edging. The one on the hard right was a noticeably different colour verging on more apricot tones – presumably the yellow throat bleeding colour further into the pink

There were a few interesting breaks – the palest form with pink picotee edging, the one which appeared to be developing apricot tones rather than shades of sugar pink, a big deep cerise one with an attractive white star within the trumpet. Some plants have noticeably larger blooms but, as with many plants, this can make the flowers more vulnerable to weather damage and often with fewer flowers to the truss. There is always a trade-off in the plant world. 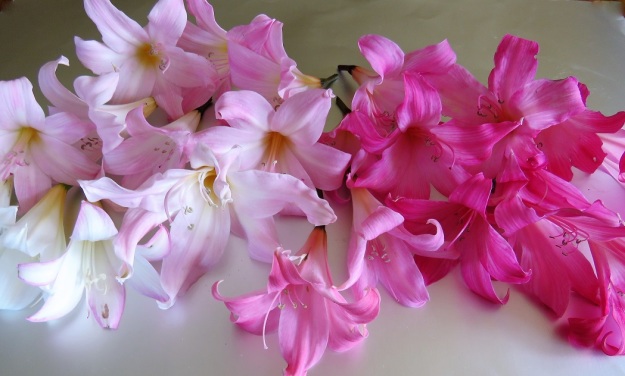 The deepest coloured forms – cerise almost getting to red – tend to be later flowering and are  the only ones that we have ever had picked by passersby. But that was years ago. These days our road verges are so steep that there is nowhere safe to stop and nowhere to walk so the flowers are safe. It is an ill wind, I guess, though we would prefer more hospitable road verges and slower traffic.

There is only one single species in this family of Amaryllis belladonna but clearly that species is variable within itself. I am not sure that there is a great future for them other than as casual clumps on road verges or in wilder areas of the garden. Lovely though they are on their days, their blooming season is brief, they form large clumps of large bulbs and hang onto their foliage for a long time before it dies off untidily. They don’t lend themselves to the flower garden where they will swamp anything around them and take up a lot of space for their 10 days or so of glory. 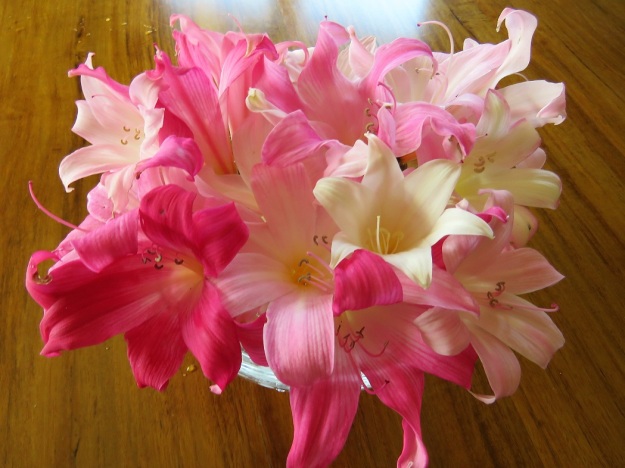 5 thoughts on “More on belladonnas”