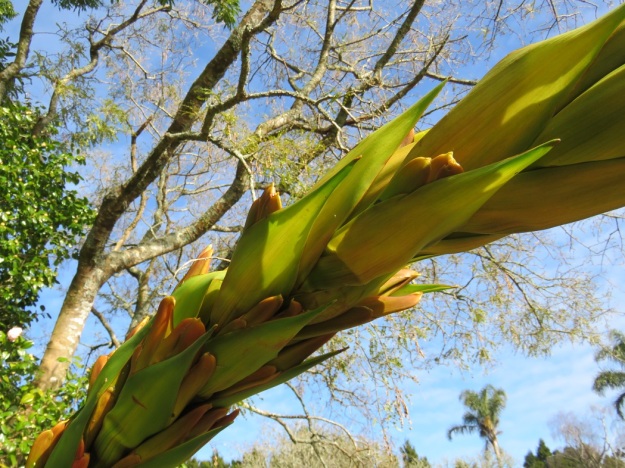 I first reported on the blooming of Doryanthes palmeri, the giant Queensland spear lily, back in July. July 14, to be precise. It had never flowered here before but we are nothing if not patient gardeners. Besides, this poor specimen had never even been planted. It was just tossed aside in the nursery and had rooted through its original planter bag in a spot by the hedge. In the decade or more since, the nursery has been closed and that area converted to the new garden. 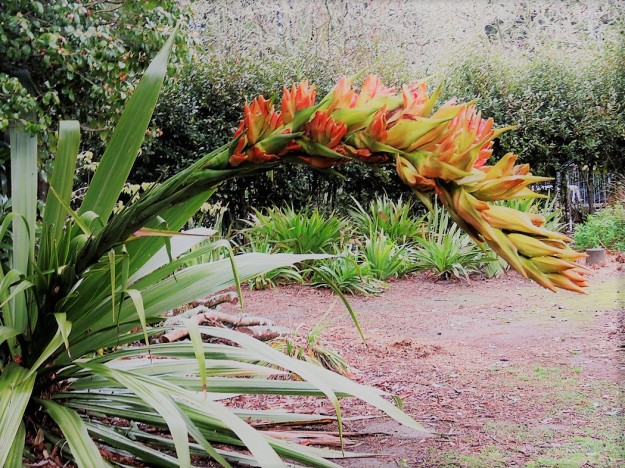 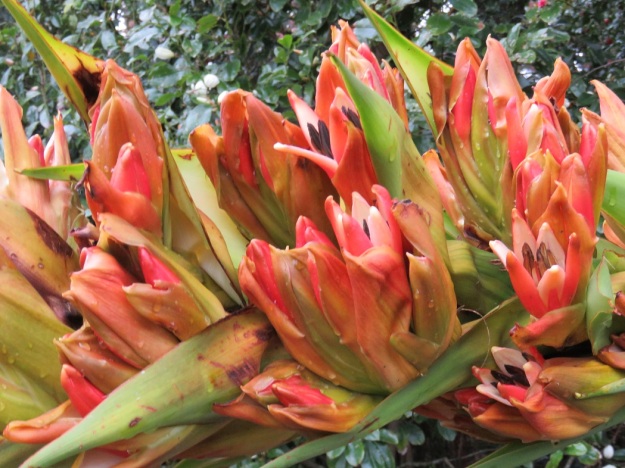 I thought the leaning flower spike might be because the whole plant is leaning out to the sun, but I see that it is typical of the species and I can’t think of any perennial that is strong enough to hold a flower spike of that weight and substance on the vertical. As more flowers opened, the spike weighed further and further down until it now rests just a few centimetres above the ground.

This solved a mystery for me. As we lumbered along on the slow bus from Sydney airport to Bondi Junction in July (we were not in a hurry and travel lightly so the bus exercise cost about $A3 each instead of over $A70 for a taxi), Mark pointed out the spent doryanthes flower spikes standing tall on a plant. Crumbs, I thought, ours is just opening and theirs are already finished. But as those spikes were very upright, I realise now it must have been the other doryanthes species, D. excelsa. It’s natural habitat is a little further south, in limited areas of coastal New South Wales. 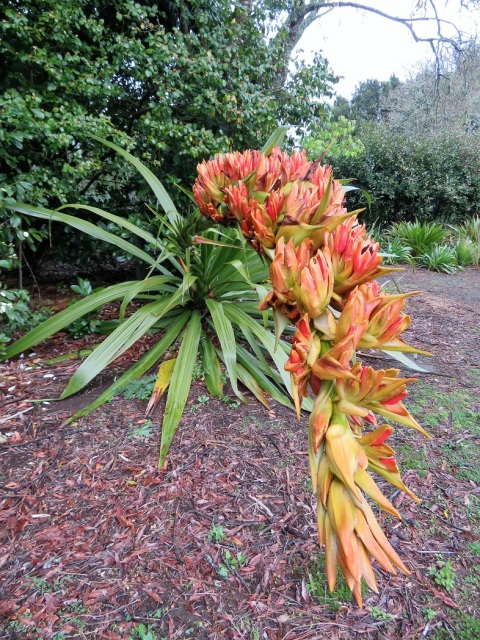 I continued to photograph our plant through August. By September, I was working out that it was never going to open en masse as I had thought, but individual flowers would open in sequence and remain cup or goblet-shaped, not opening flat. The bees loved it and every time I passed, I could hear the hum. Each flower held a little well of nectar and I caught sight of the occasional tui bird feeding there but mostly the bees held possession. 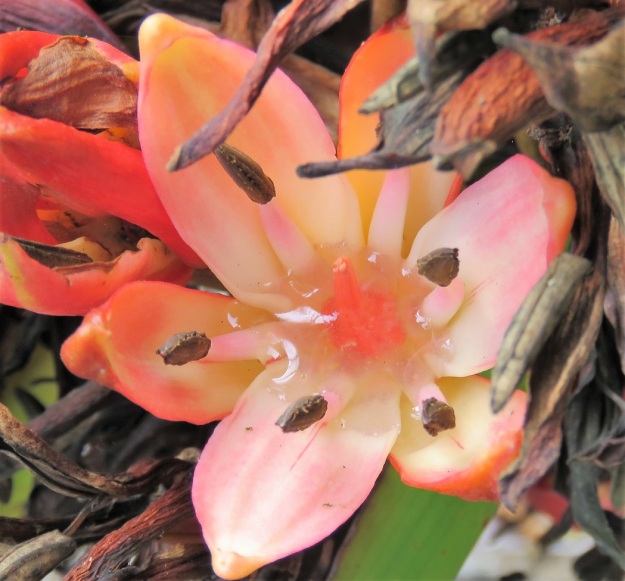 It is now the end of November and still it flowers on. Past its best, maybe, but four months have now passed. The flowers are still pools of nectar. 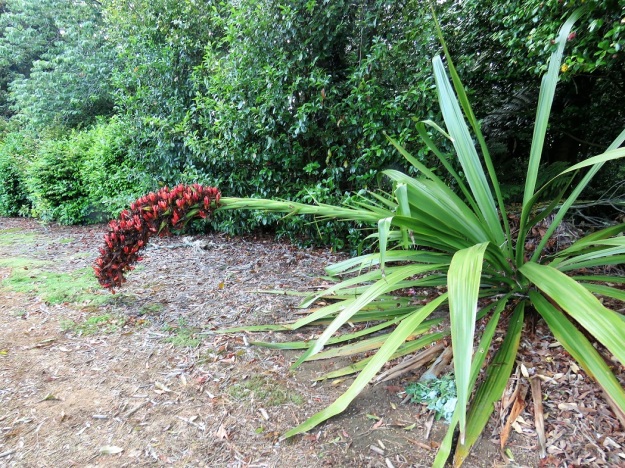 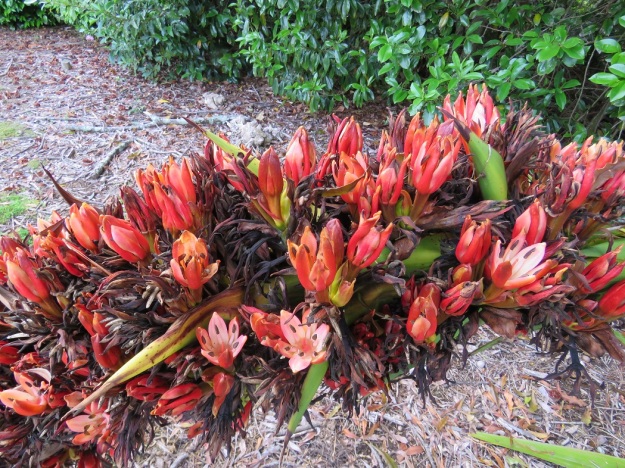 This is not a plant for every garden. The leaves are a metre and a half long so it needs a space that is over three metres across in all directions. But I have just the right spot for it when I get to plant the new Court Garden next autumn. I see on the Australian National Herbarium site that each rosette only flowers once but then smaller rosettes are formed at the base. Like the giant  cardiocrinum lily, in fact. But we will have to wait more than another decade at least for flowers on the new rosettes.  Fortunately, we have another plant (also still in a pot) which may star in one of the interim years.

The doryanthes is listed as ‘vulnerable’ in the wild, largely because of its very limited natural habitat in the south Queensland coastal area.

We grow a fair number of plants that have a short flowering season of maybe a couple of weeks. If you take a plant that flowers from July to December once a decade or so, the time in bloom averages out to something similar. And the doryanthes is a handsome foliage plant in the years between blooming. 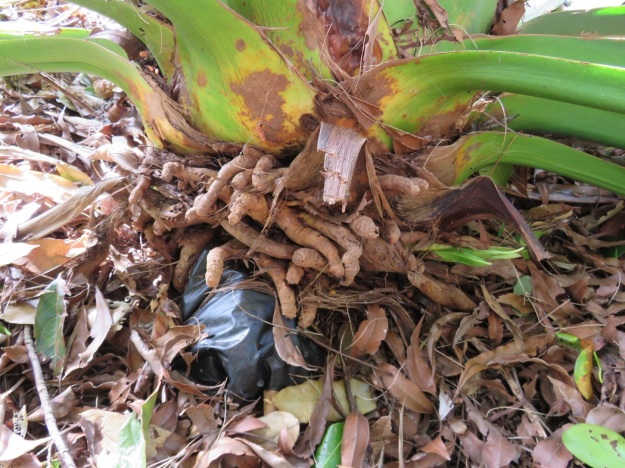