Gardening is usually a gentle activity in emotional terms. We may feel irritation, pleasure, satisfaction, disappointment or similar feelings. The feeling of sheer panic is probably largely limited to those gardening to deadlines with either an opening date for the public or a garden-based event. Occasionally, I feel real joy. I wrote about the feeling of joy in December 2016, down in our meadow. By joy, I mean the rare times when my heart sings.

It was back in 2009 when I wrote about our quest to get to grips with summer gardens. We do very good spring gardens throughout New Zealand but by summer, most people’s thoughts turn to beaches and barbeques. With a predominantly woodland garden here, our garden in summer was certainly lush, green and restful but not exactly vibrant.

A decade on and I looked at my herbaceous borders this week, and my heart sang. “Yessss!” I thought. “We do actually have a summer garden at last.” A colleague and friend visited this week and was suitably gobsmacked. “When you said you wanted to do herbaceous borders,” he said, “I thought …” I can’t remember what he said he thought but it was along the ‘yeah nah. Unlikely. They’ll learn. It’ll never happen,’ sort of thing. It was very affirming to impress a professional colleague of similar experience level to us. These borders are now at what I call the ‘tweaking stage’. Altering the bits that don’t quite work. Were I more high-falutin’, I would describe this as ‘editing’ (the current term) or maybe fine tuning. But every day, these borders bring me great personal pleasure.

Lily border to the left, caterpillar garden metamorphosing to the right

On the other side of this area (with the yet to be planted Court Garden in between) is what Mark calls the caterpillar garden. That is because he drew inspiration from a piece on BBC Gardeners’ World where leading UK designer, Tom Stuart Smith, was clipping established buxus plants into his trademark undulating forms redolent of a caterpillar. We don’t do buxus here, so Mark planted out the basic structure in the dwarf camellia species C. minutiflora. For the shape, he drew inspiration from the basket fungus which is based on five-sided shapes. So what we have are eight enclosed pentagons with bays to the side, making 23 different garden sections. Mark’s vision was of tall plants billowing out of the enclosed centres with lower plants filling all the side sections – all in shades of blues, whites and lilacs. It fell to me to fill in all the blank spaces. It is coming together. Most of the planting was done by last summer but because the camellias giving the basic form were poor, hungry specimens kept too long in the nursery (I have no idea how many – well over 100 of them?) they are taking time to recover and flourish. And the perennials with which I am painting are smaller growers than those I used in the new summer borders so it is taking longer for them to fill in the spaces. It is block planting – generally only one or two different plants per section – so a whole lot depends on the selections made at the start.

Today, I will strip out the deep pink phlox in one section – too pink. It was a mistake. Fortunately, Mark raised some perovskia seed – Russian sage with blue flowers and grey foliage. It is unproven in our conditions but will be ideal if it works and way more harmonious than the pink phlox. 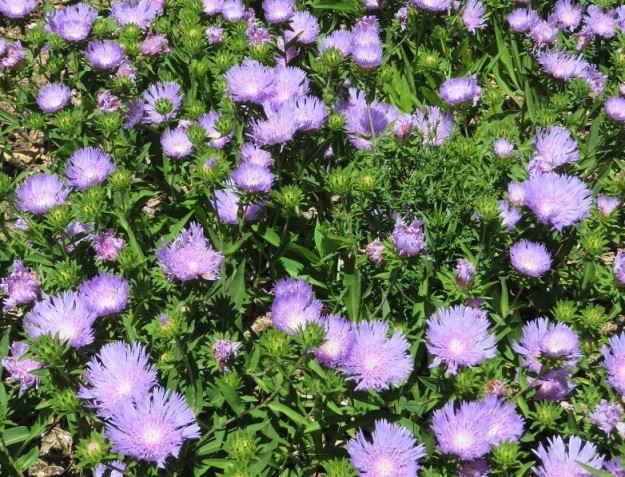 A stokesia! We were both wrong.

An American visitor this week set us right on the plant that I was sure was a scabious but Mark kept referring to as a centaurea. It is in fact a stokesia and is a wildflower where he lives so we defer to his superior knowledge on this matter. He said he didn’t know which stokesia it is but as we know it dates back to Mark’s mother, it is almost certainly one that was sold in the 1960s. It has stood the test of time, I can tell you that.

Many of us covet those gorgeous big blue-lilac alliums that are seen widely in UK gardens. I was a bit shocked to find they usually treat them like tulips – disposable, one-season wonders. But then I looked at some bulb catalogues there and they are cheap as chips to buy. If we are paying anything up to $15 a bulb here, we are not going to be treating them as annuals. I decided this spring that the easy to grow blue brodiaeas – particularly Brodiaea ‘Queen Fabiola’ (also known as a tritelia) are not bad substitutes for we poor, colonial gardeners. I am drifting these bulbs along one side and very pretty they looked in spring with the white iberis. And they are perennial, not one-season wonders.

I am looking forward to autumn to start planting the central court area. I am mentally prepared for this large planting project. I have most of the plants needed at hand, not all, but most. It will be a quick turnaround, immersive grass garden – big grasses at shoulder height or taller, mostly. A prairie on steroids, perhaps?

I think it bears repeating: if you want a summer garden it needs to be close to all-day sun and start with the perennials, not trees and shrubs. Think of it like painting with flowers because it is those which give the seasonality. Form and foliage are important but they are not the foremost defining factor for a summer garden.

6 thoughts on “Found! Our summer garden.”