The most asked about plant in our garden was Ficus antiarus. I say was because the small tree became collateral damage when a massive pine tree fell over last April. We feared for its long-term survival as all that remained in the ground were some of the longest roots. 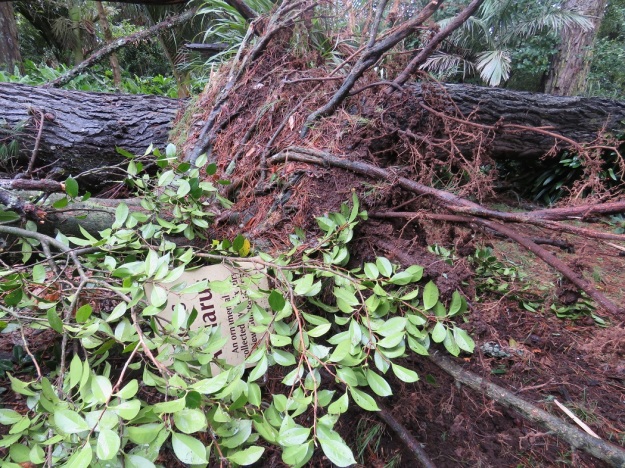 Brought down by an enormous falling pine last April. That is the root system, uprooted.

It took a couple of weeks to clear the area sufficiently to have room to move and then Mark and Lloyd levered up what remained and installed a prop to hold it more or less upright. Mark took a chainsaw to it to remove most of the canopy and the broken branches. He pruned to keep the shape while reducing the stress on the tree by reducing the smaller branches and much of the foliage. Too much leafy growth would mean increased loss of moisture and we hoped it would put its energy into re-establishing the root system over winter. We crossed our fingers. 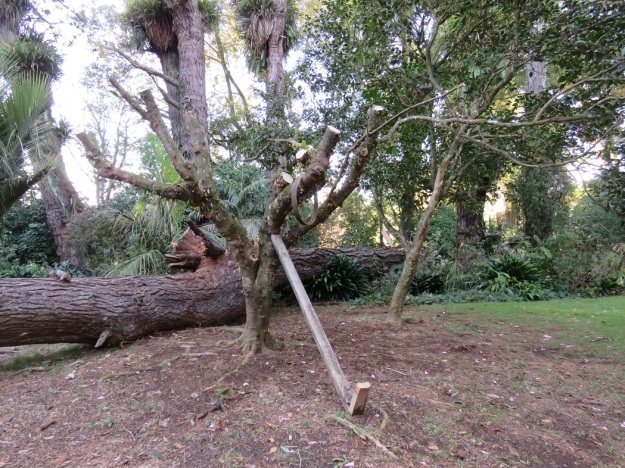 Behold the fresh leafy growth now. It is a sight to behold. It set no fruit this year but we didn’t expect it to after such a shock. It appears that it will live on for another few decades. I asked Mark how long the prop would need to remain in place and all he said was that he had no idea so I guess he hasn’t thought about that yet. 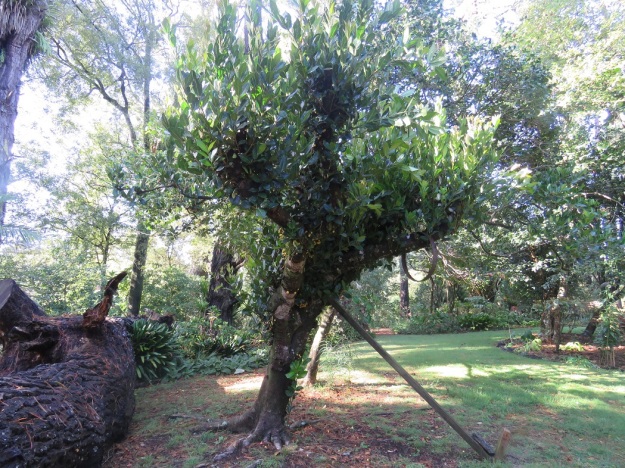 Mark’s father Felix brought Ficus antiarus back from his one and only intrepid plant-hunting trip – to the highlands of New Guinea in 1957. He thought that in the cooler temperatures of the areas with altitude that he might find interesting plants that would survive back here. He didn’t bring a big haul back but the ficus, Schefflera septulosa and Vireya rhododendron macgregoriae have all stood the test of time.

The ficus has mid to dark green leaves with an interesting rasping texture – not unlike green sandpaper. It is evergreen, unlike most eating figs. What is most remarkable about it is the generous set of tiny figs growing out of bare wood. They start out cream, ageing through orange to red. Birds don’t strip the tree so the fruit must not be very inviting to them. I have nibbled the odd red fruit and they have a faint figgy flavour but not enough to make them an addition to the diet. We just like it as a curiosity at the end of the Avenue Garden. 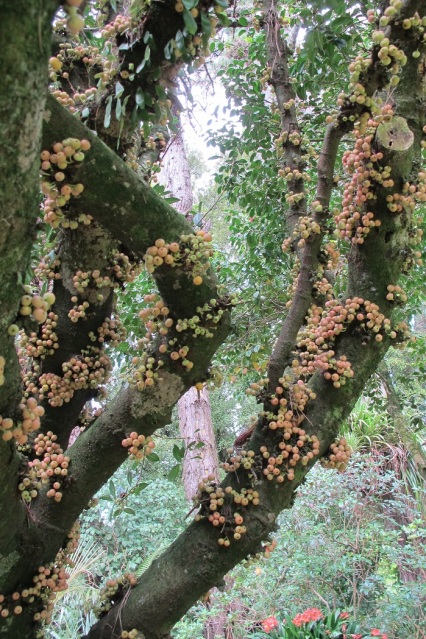 Before it was knocked down – we are now optimistic it will return to this state.