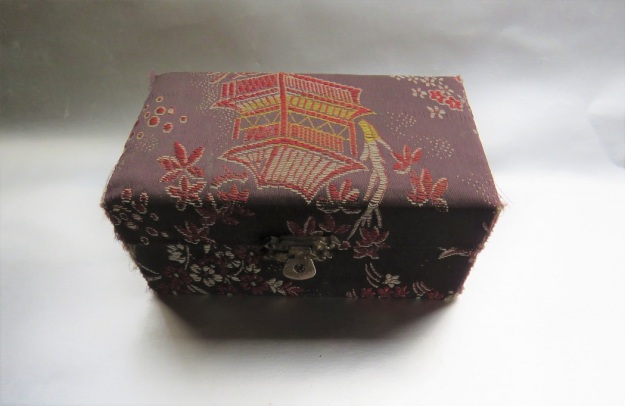 The Chinese box was allegedly a later addition

I would like to tell you the tale of Harry. He could equally have been called Tom or Dick, but I will preserve his anonymity by calling him Harry. He was a neighbour of ours in the rural sense, which means that he lived a few, but not too many, kilometres from us.

Harry was a retired farmer, confident of his position in the world. And he had a pendulum in which he placed absolute trust. My first encounter with him must have been December 23 or 24,  2007, when he called in to see if we had a fax machine. His pendulum had told him where the missing UK child, Madeleine McCann was. She was, he assured me, being held in a commune in the centre of Spain dressed as a boy, with her hair cut and dyed dark. He wanted to let the Spanish police know so they could get Madeleine home for Christmas. I thought he was cutting it a bit fine, really.

As we walked over to my office where the fax machine was, he whipped out his pendulum and *located* ten dead bodies deep beneath our driveway. Historical, I think. They were a long way down. He then proceeded to tell me how he knew that the war medals stolen earlier that year from Waiouru Army Museum had been taken across country to the Port of Napier and they were now in Berlin. His pendulum told him so. Events were soon to prove him wrong on this but I am sure his pendulum gave him an update to explain this later.

Because it was so close to Christmas, I was busy in the kitchen and I left him in my office with a friend who was staying, to assist in sending his fax to the Spanish police. They had some issues getting the fax to go through and when the phone bill arrived later, there were multiple calls to a Spanish number, costing about $15. To this day, I wonder what the Spanish police thought, getting repeated faxes and calls from Mark Jury Nursery in NZ in the middle of their night. He turned up the next day with a bottle of wine as a thank you but I knew that it was the cheapest bottle of wine at the Waitara New World supermarket, costing about $6.50.

We then went through a period when he became fascinated by Mark. He arrived one day, bearing a cracked and chipped old vase that he had seen in a shearing shed out the back of beyond and he bought for a dollar. It had a vaguely Spanish look to it but his pendulum had told him that an ancestor of Mark’s had carried that vase back on one of Christopher Columbus’s expeditions to South America. So deeply ingrained are middle class manners, that I conversed courteously with him on this topic, but I recall laughing later with Mark that he did not offer to gift this family artefact to us. After all, he had paid a dollar for it.

But wait, there is more. Next he turned up with another artefact he had found. His pendulum swinging over this item informed him that one of Mark’s ancestors had sailed with Sir Francis Drake. I mean, Columbus, Drake, not much difference, is there? I didn’t mention the previous Columbus visit. He assured me these were very small bowling balls, used by Drake to while away the shipboard hours. Reportedly, Drake was playing bowls onboard in the lead-up to his great victory over the Spanish Armada. Quite what role Mark’s ancestor played in this game of bowls with Sir Francis Drake, the pendulum failed to specify.

For the avoidance of doubt

Astonishingly, Harry gave us Drake’s small balls. ‘Somebody has put them in a Chinese box at some stage,’ he told me. For the avoidance of doubt, he had put a sticker on the bottom. ‘Drake 1590 1739’ the sticker reads. Bit of an oops there with the date, apparently, though we do not know whether it was the pendulum or Harry’s research that made the mistake.

I opened the Chinese box, quelling my excitement. I am sure you can visualise the scene.

Reader, they are Chinese chiming balls that were all the fashion a few decades ago. The chimes still work. Maybe Taiwan 1970?

I feigned gratitude but informed Mark that next time I saw Harry arrive here, I would hide. He was all Mark’s to deal with from now on.