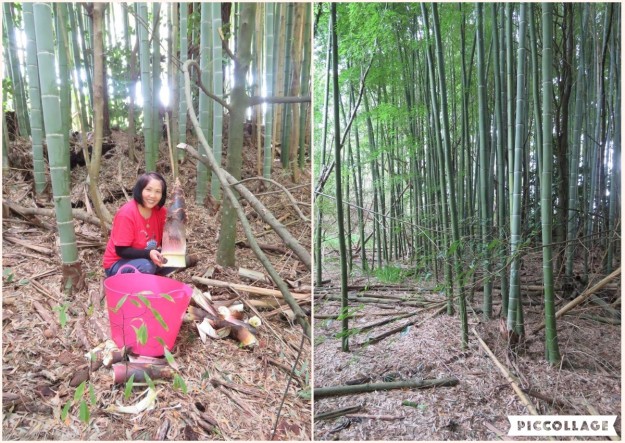 Watching Meng gather bamboo shoots and strip them down on site, amongst our giant bamboo was an illuminating cultural experience at home.

We have dabbled with gathering them in the past, making the assumption – based on more common vegetables – that the younger, smaller shoots would be the most desirable and tender to eat, rejecting anything over 30cm. We carefully dug the shoots out and brought them up to the house to prepare.

Just the lattice tip is prepared for eating

Meng is a local resident now, but from north eastern China. She grew up harvesting bamboo shoots and she was not here to muck around. She rejected my small tender shoots – “too small” and selected only larger ones, most of which she kicked over with her boots. I tried kicking over with my gardening shoes and it is harder than it looks but Meng made light work of it. The tallest shoots she was harvesting were up to maybe a metre and she sliced off the top 30cm with a very sharp, heavy knife. She then stripped down the shoots, cutting off the hard, outer husks with a confident display of knife-work that would match any chef, leaving the offcuts to rot down in the bamboo grove. She was only after the tips where the inner lattice-work has developed. That, I assume, is why she rejected my small shoots – because the proportion of lattice at the tip is too small.

Meng brings these tips to the boil and leaves them steeping in the water overnight. Then she leaves them to dry and will either freeze them, dehydrate them or, I assume, use them fresh. Her partner tells me they are going to try pickling some too, which sounded interesting.

The steeping in water is important. In the past I have followed internet instructions and brought them to the boil in at least two changes of water which presumably achieves the same end. Raw bamboo shoots are bitter and contain some level of cyanide.

It is time I gathered my paltry few and prepared them for future use. Meng’s harvest is much larger than we require for our needs. I feel that serving up a meal of homemade tofu from homegrown soy beans with fresh bamboo shoots may be a pinnacle of virtue signalling. I admit that I do not find bamboo shoots particularly exciting as a taste treat but they add variety and texture.

Mostly, I was entranced by the sight of Meng in our bamboo grove carrying out an efficient harvest. 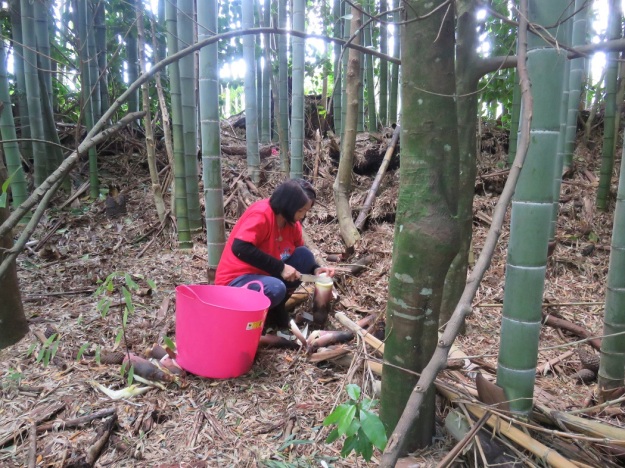 5 thoughts on “The bamboo harvest”