There is only so much disaster news I can cope with. Usually I find solace in the flowers and trees of the garden. Yesterday, as I picked the raspberries, it was nostalgia that struck me in a huge, sentimental wave. One of the better aspects of growing older is that the store of memories grows greater with each passing year and sometimes I find myself drawing out past memories that I have not thought about for a long time. Though my raspberry memories flood back every year as I carry out the harvest here.

The summer of 1969 was a seminal event in my teenage years – the first experience of adult freedom. We grew up earlier then. I was only fifteen when, with my three best girlfriends at the time, we organised a summer stint fruit picking. We would rather have been picking cherries or apricots but it was a raspberry orchard in Beaumont, Central Otago, that was willing to employ us. In those days, orchardists provided basic accommodation and meals for their seasonal workers. In this case, it was a boys’ bunkroom and a girls’ bunkroom.

The picking of the raspberries. I think we were paid 45c a box. That is yours truly at the front.

Kate, Pippa, Clare and I thought we would have a great time – get suntanned, lose weight and earn money. We had a great time but none of the rest was the case. It rained. A lot. The raspberries went mouldy on the vines. The orchardist wife catered lavishly for us. With fresh scones, raspberry jam and cream on offer every morning and afternoon tea, I think all of us put on weight. The money was scant. Based on the kilo and a half of raspberries I am currently harvesting every second day, I think those wooden boxes probably held about 10lb or 4 ½ kilos. From memory, we were paid 45c a box. I remember working out that if the weather held and I picked as fast as I could until there was no more daylight, it was possible to pick eight boxes in a day. Even back then, $3.60 a day for close to 10 hours work was not great money.

Suffering from cabin fever in the rain, we persuaded Kate – the oldest one in our group and the only one with a driver’s licence – to requisition her mother’s car. Her parents were particularly amenable even when they were not best pleased. Four girls, cheap petrol and a Ford car. I have photos of the time taken on my Box Brownie camera. Very democratic, those photos were. One of each of us at Kate’s parents Arrowtown holiday house, then posing at the top of the chairlift on Coronet Peak (Pippa had the most model potential, I had all the glamour of a sack of potatoes) and heading out to the Beaumont pub for a celebratory dinner. 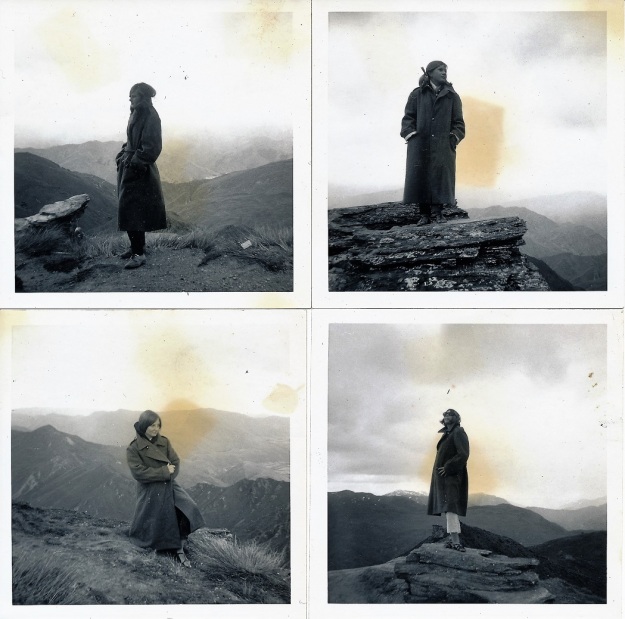 Posing on Coronet Peak. It may have been mid summer but it was still alpine.

Clare, Pippa and I had all sat School Certificate that year and the results came out in January. Kate was a year ahead of us at school. On the day the results were released, we clustered around the one phone in the house to make the all-important calls. I think I am right to say that a combined total of 200 across the top four subjects constituted a pass overall. The school we attended had set a mark of 330 as the point where they encouraged a student to skip the next year and go straight into the final year of schooling. Clare and I were aiming for that and to this day, I still feel a sense of guilt that Pippa’s relief at passing fairly comfortably (from memory, I think she got 246) was eclipsed. At 336, I met the school criteria for promotion (this is why I was only 16 when I started university a year later). Clare achieved a massive 372 and went on to study at Cambridge University. Memories can be oddly specific.

Ready for a celebratory dinner at the Beaumont pub. I am top right. Kate’s mother’s car and the bunkhouse also included, along with the shadows of the photographers with Brownie Box cameras.

I can’t remember what we ate at the Beaumont pub celebration on the day although I can still picture the setting in my mind. What I remember most is that they sold us a bottle of Gimlet, even though the legal age for drinking was still 21. Times were different. Gimlet was an early premix of gin and lime. Given our ages, I am guessing we diluted it with lemonade. With hindsight, it was just as well that Kate, as our driver, was a very modest drinker because the rest of us were certainly very merry, though not paralytically drunk.

Harvesting the raspberries always makes me think back to that summer of freedom, youth and naïve innocence.

In a sign of the times, Kate made contact with me through Facebook after a gap of maybe 40 years and honestly, social media has some very good points.

This site uses Akismet to reduce spam. Learn how your comment data is processed.