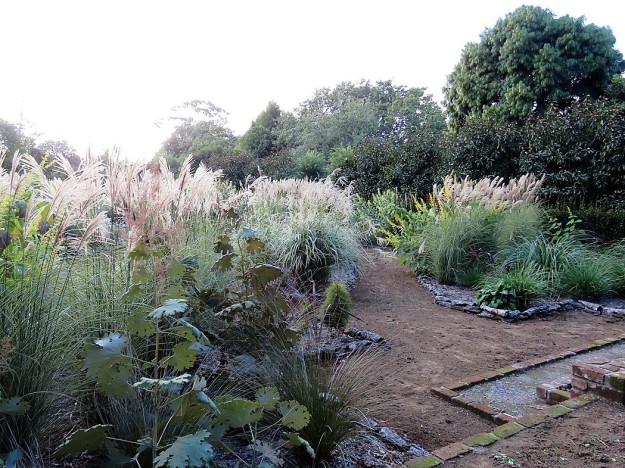 I say one year, but that is from when I first started planting the new grass garden. Much of this is only eleven months. I took this photo last Saturday, April 25. 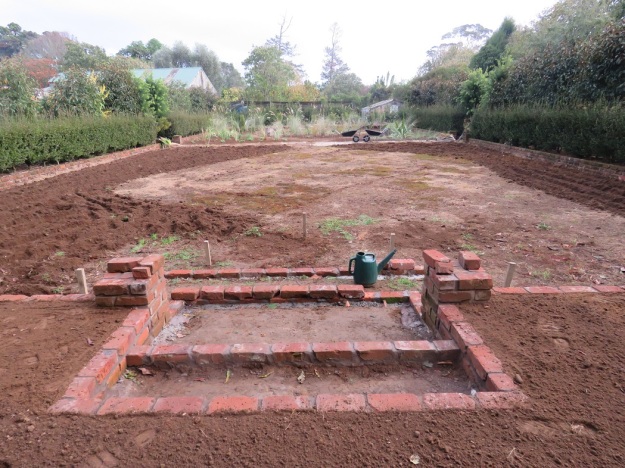 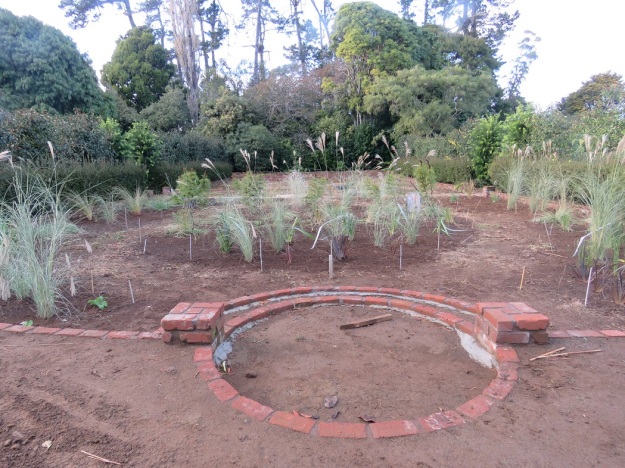 These photos, taken from either end, are dated May 16, 2019. We still haven’t filled the steps or laid the path surfaces but the plant growth has been phenomenal. New ground – plants love new ground. I expect the rates of growth to slow. 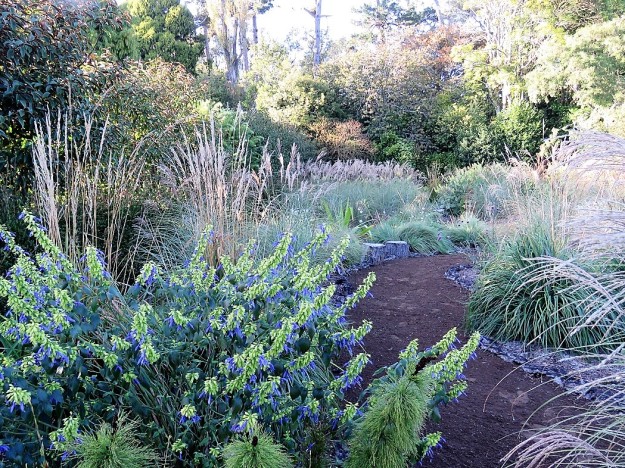 I planted at what I intended to be final spacings and there is only one section that I have put in too closely and will need to reconsider. The rest, I think, will be fine for some time. Mark would like more flowers so I am working in a bit more colour as I find plants that I think will be able to compete. The giant Joe Pye Weed (Eutrochium purpureum) which the bees and monarch butterflies love is the next to move in.

I was worried that I had too much Miscanthus ‘Morning Light’ until I took a closer look this morning. There are only four waves across the whole garden and I don’t think that is too much. It is just that it is very dominant at this time of the year. It is a brilliant tall grass and only throws up a few unwanted seedlings. 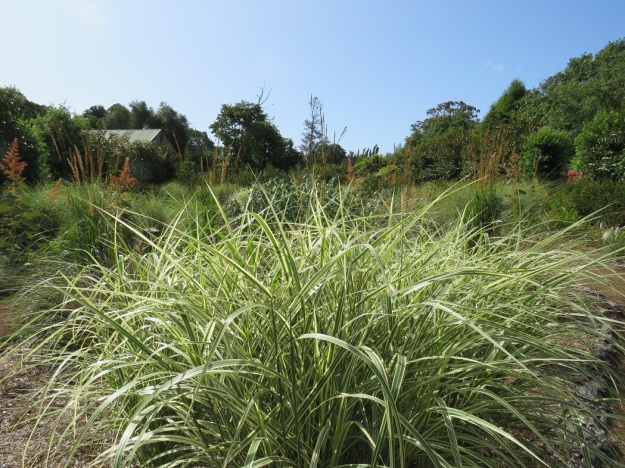 Big miscanthus flopping after only 10 months 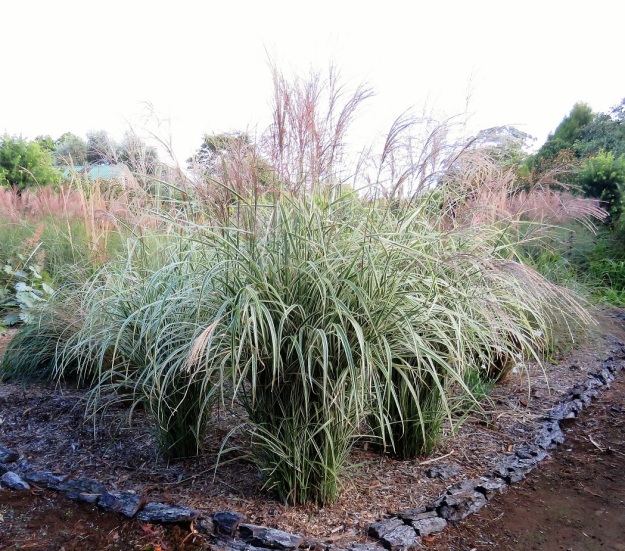 A friend gave me a larger growing form of miscanthus, similarly variegated but with a wider leaf. It was too large for her and fell apart too readily. It is an excellent looker but I worried when even the fresh divisions started to fall apart and flop onto the paths as early as January. I don’t want plants that I have to dig and divide every year. The solution was simple. I tied a string around each clump, just a length of anonymous jute string that is not visible. A five minute job solved the problem.

I would like more large grasses for variety but have failed to source additional options so far. They are obviously not that popular in this country. I looked at Miscanthus ‘Zebrinus’ which is available and rejected it. The variegation looks too much like spray damage to me. 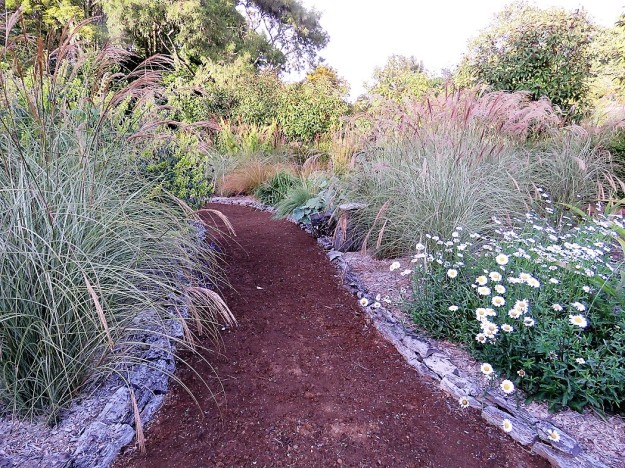 For those of you who are interested in grasses, I offer this update on performance of others I have used:

Chionochloa rubra (our native red tussock) is brilliant. My favourite grass of all. It needs space around each plant so that its attractive fountaining habit can be admired.

Chionochloa flavicans is often described as a miniature toetoe though it is a different family. I had a lot of trouble getting plants large enough to survive sustained attack from rabbits. Mark has shot 34 of those cursed bunnies so far this summer and most of the plants are now large enough to withstand future attacks. If you can control the munchers, it does indeed look like a small toetoe in flower though it is pretty anonymous in leaf and form.

Proper toetoe are now classified as austroderia and I think it is A.fulvida that I sourced through Trade Me – the only three plants I had to buy for this whole new garden. They have grown ten fold since I planted them but that is fine because I gave them space. I am looking forward to their flowering next year.

Stipa gigantea (Golden Oats) – an attractive enough grey-green, fine-leafed grass but the main appeal is their ethereal, large flower heads on tall spikes. The wretched sparrows took out every one of the main flowering but they have persevered and continued to put up new flower spikes. It appears to be sterile.

Miscanthus, as mentioned above, is a key feature and the only fully deciduous grass I have used. We started with just one established plant which was elsewhere in the garden and I have lifted and divided it over three years to get as many as I want. It doesn’t need to be divided that often but I wanted more plants.

Calamagrostis ‘Karl Foerster’ I took out of the twin borders because it is too rampant. I thought it may be fine in the more spacious grass garden but it is too rampant. It is beautiful when it puts its flowers up in late spring but it is altogether too strong, spreading rapidly with its expanding root system. I am thinking I will take every second plant out this autumn and look to replacing it altogether as soon as I find a less vigorous alternative.

If any readers have other suggestions of tall grasses that are available in NZ, I would be pleased to hear. 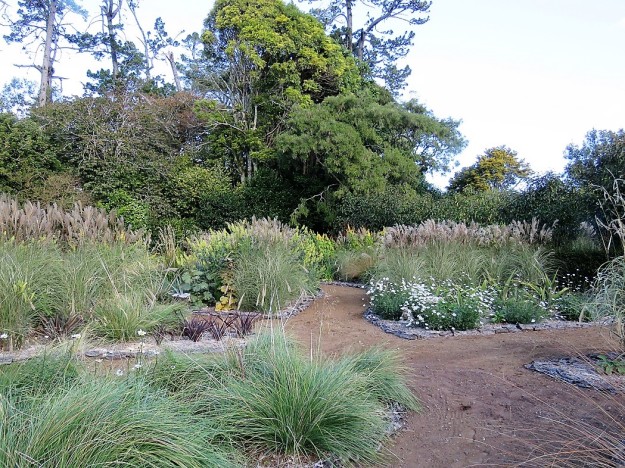 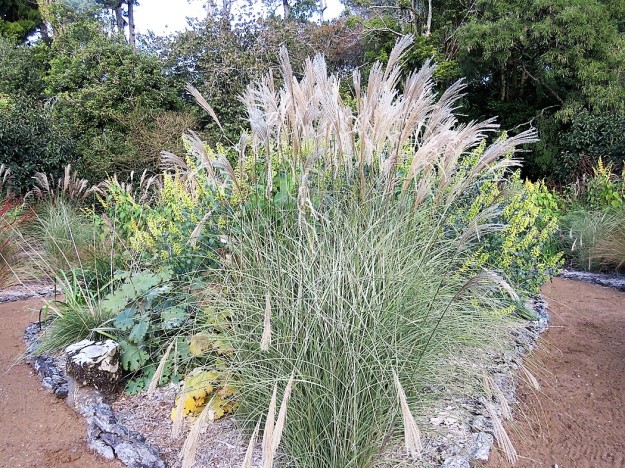 12 thoughts on “One year on – the Court Garden”