I feel that we are becoming increasingly reclusive in this new world we are facing in 2020 but there are many worse places to become reclusive than here. It is magnolia season.

It is time for my annual reminders on magnolias.

Lanarth at the top, Mark’s purple below

We have been hesitating about whether we can fairly describe Mark’s selection (as yet unnamed) as purple. Magnolia campbelli var. mollicomata ‘Lanarth’ is widely seen as setting the standard for purple magnolias. I finally got around to lining up petals of Mark’s purple and Lanarth petals to compare. Magnolias are variable so I picked up the darkest petals of Lanarth I could find and it seems that the colour of Mark’s measures up. 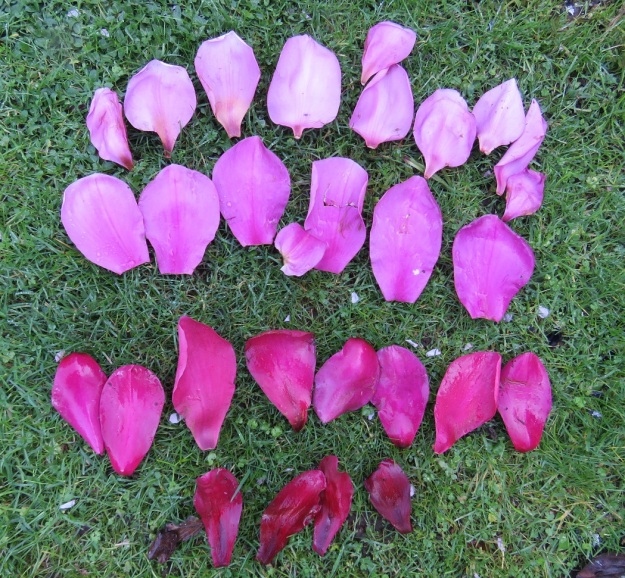 Just out of interest, I added in Vulcan petals. Vulcan was the first of the new generation magnolias 30 years ago that moved into red tones, rather than purple. The few at the bottom are of Burgundy Star, the next generation of reds bred from Vulcan. Mark is getting to cleaner reds.

More on Cold Water Surf (or any other washing powder) and moss. You can, and I have, use it on moss in the lawn. We accept moss but preferably the fine forms. I am not a fan of liverwort and some of the coarse mosses and Surf works on them.

Hard surfaces? Hmmm. It works. It kills the moss. If all you want to do is to get rid of slippery growth, it may be fine to sprinkle it generously, wait for rain and then use a stiff brush a few days later. I want these pavers back to their soft gold so I tackled these with a wire brush but it is going to be a lot of hard work to restore the whole area. I think I will resort to the water blaster (jet washer).

Finally, a few mood shots from this week. We do not generally get mist or fog so this morning mist gathering in a lower area seemed appropriately mystical to me.

On a grey morning, a few shafts of rising sun broke through to illuminate the magnolia in the distance. It was a somewhat startling sight.

More often, this clarity of light is the norm for us, even in winter. That is Mark’s Fairy Magnolia White which really does have an exceptionally long flowering season.

7 thoughts on “Of magnolias, mood lighting and more on Cold Water Surf”