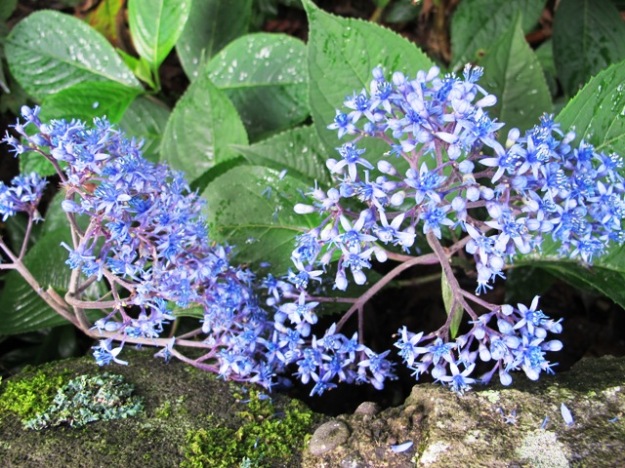 It is a member of the hydrangea family and grows like a hydrangea. But the beauty of the dichroa for us is that it flowers for pretty much twelve months of the year. The trade off is that we never get the massed seasonal display that we usually associate with hydrangeas, but it is rare not to see a few cones of pure blue flowers.

A Google search suggests that not all dichroas have as good a colour as we expect in New Zealand. It was Taranaki plantsman Glyn Church who introduced the dichroa to this country and I would guess that the form he brought in has consistently good blue colour.
blue

This is a relatively large growing evergreen which is a back of the border plant. It is quite happy in sun or shade. This plant is growing beneath a huge magnolia. If you don’t trim it from time to time, it will get large – in the 3m x 3m range. I keep this specimen under control and a little denser in growth by trimming back long branches to the lowest point where there are clearly two growth shoots on the stem. It doesn’t seem to matter what time of the year this is done so I just snip and clip when the flowers on the branch have finished or before buds have formed. It is native to North Burma and the Yunnan area of China and is reasonably hardy. 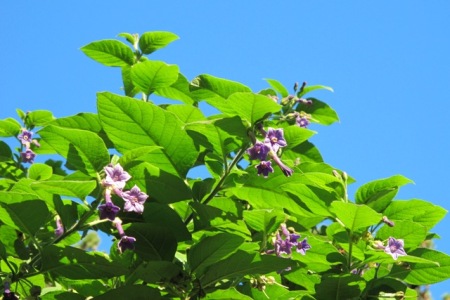 Our Iochroma grandiflorum on a magical late autumn day

We were looking out at our iochroma this week, marvelling that it was still in flower and making a wonderful picture in the late autumn conditions. We tried to remember when it started flowering and we are pretty sure it was in bloom by late October. A plant which flowers for seven months is not to be sneezed it. Technically it is a shrub, though at over 3 metres high it is a large one, yet it never gets very woody. The stems are quite brittle. Iochroma hail from Central and South America – this one is mainly found in Ecuador. It doesn’t mass flower but keeps producing an apparently inexhaustible supply of these pretty blue trumpets which are about 10cm long.

Iochromas belong to the solanaceae family (think solanums, like tomatoes and aubergines) and you may see a resemblance to its pest cousin, woolly nightshade. The leaves are large, soft and almost felted. Being large growing, brittle, soft foliaged and from warmer climes, you might think it is not a starter for colder, frost prone areas but it is remarkable resilient. Wind, frost, cold and heavy rain will knock it about, even defoliate it at times, but as long as it is well established, it can return to fine form very quickly as soon as temperatures rise. It sets its flowers on new growth so as long as it is warm enough to keep the plant growing, it continues to produce blooms. However, it is not a tidy little plant suited to immaculate little gardens but sits more as a large border plant in similar conditions to abutilons. Tui are reputed to love it feeding from the flowers.