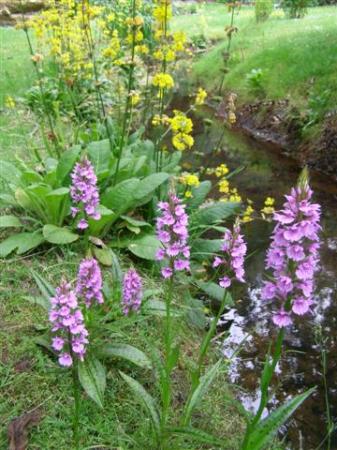 Dactylorhiza - doing better on our stream margins than in the garden

Dactylorhiza are terrestrial orchids – in other words, ground orchids. We have had this purple one for many years. It is likely that Felix Jury imported it here in the early fifties and it has gently increased ever since. It has taken us a long time to realise that it is happier in the cooler, damper conditions of our stream margins where these specimens are growing taller and lusher than those we have in rockery or other garden positions.

The rhiza part of the name refers to the root which is liked a forked tuber, or rhizome and it increases in a similar manner to many bulbs. Dactylorhiza are very widespread in the cooler areas of the northern hemisphere, occurring as far north as Scandinavia and even Alaska. While we have always had this one as D.maculata, otherwise known as the Heath Spotted Orchid, there is a bit of a question mark over that and it may in fact be D. fuchsii, the Common Spotted Orchid or even a hybrid between the two. The differences are subtle – are the markings lines? Is that pointed area in the lower lip like a small middle tooth or is it a lobe? Whichever, the foliage generally has interesting deep maroon spots which are an attractive feature, even without the flowers. Each flower spike is about 20 to 30 cm high (a happy plant will put up a taller spike) and carries masses of individual orchid flowers which open pretty much all at once. The yellow behind the plants in the photograph is the common Primula helodoxa.