At the end of March this year, I wrote about gutting the old rose garden and making the sunken garden more of a feature in a simplified scheme. Reader, as the grass has grown I have been meaning to update with a suitably flattering photo of the new configuration. I have been delighted with how effective it is, despite Mark commenting that he liked the previous borders. He didn’t garden them, I replied tartly. 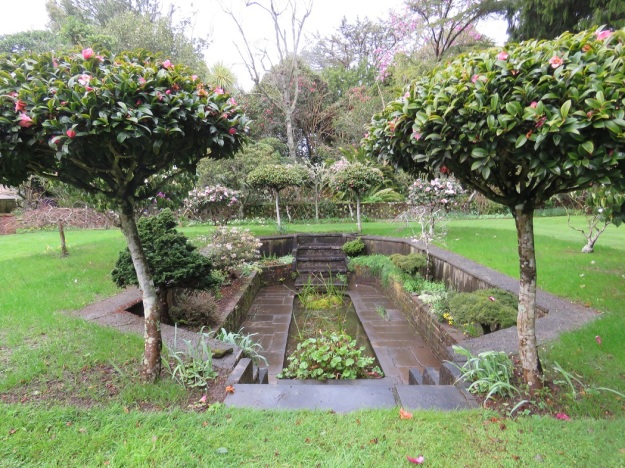 Sometimes there are unforeseen consequences. And we did not forsee this one. Clearly, the cultivated garden borders that were there before soaked up a lot of water. As soon as we cleared them and levelled the ground, the sunken garden started flooding. It is the lack of vegetation, we thought. When we get heavy rain, it is turning the soil to a smooth surfaced, muddy area that sheds the water immediately rather than absorbing it. When the grass grows, it will be better. But no.

We get heavy rains here, torrential at times. I usually observe that in a climate with relatively high sunshine hours and a relatively high rainfall of 150cm, it means that the rain tends to be heavy and then the skies clear and the sun comes out. We also have excellent drainage; surface water is absorbed within twenty minutes of the rain stopping. But this does not solve the sunken garden problem. The pond is filling with mud, the goldfish are unhappy and the little raised gardens which are in the sunken area are full of treasures that are threatened by the sodden soil.

What to do? For technical reasons (mostly to do with the roots of our enormous rimu trees), we can not recontour the lawn to shed the water in the opposite direction. We debated installing drains but the water still has to go somewhere and it would mean creating a sump nearby. Should we make a low barrier to stop the flow of water over the sides but how would that look and would we then be channelling the excess water down the steps? We are still thinking.

While I really like the look of the top edging being on the same level as the lawn – the status quo – that is not an option. At this stage, we are thinking that creating a whole new top edging sitting just 2.5cm above the level of the lawn will be the solution. I considered doing it in pavers but concrete will give a crisper, cleaner line.  That is a summer job because it will involve boxing up and pouring concrete. It is not an easy option because the top edging has a small lip that gives a better finish rather than keeping it flush with the walls. Our Lloyd, who does all the concreting, can’t quite work out how Felix did it in the first place (the slabs were clearly poured in situ) but he is thinking through how best to redo it 60 years later.

Fresh concrete is very stark and white and sticks out like a sore thumb in an old garden. Fortunately Lloyd is equal to this. He adds some black colouring to the mix to get a more aged grey tone and after it has been poured and levelled, he sprinkles sugar on top of the smooth surface, hosing it off when nearly set. This takes off the fine top layer so what we finish with is exposed aggregate in darker grey shades. He has done it elsewhere here and the new melds very quickly with the old.

It is a lot of attention to detail but this new look garden needs that attention to make it appear a seamless blending of original with new. Or perhaps I should say, we strive to make the new appear old from the start 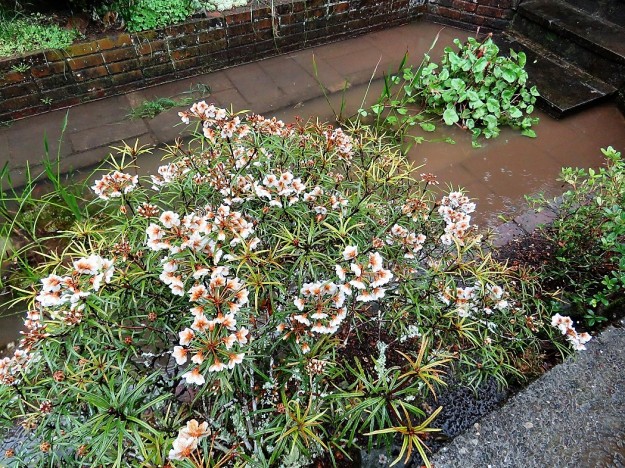 Vireya rhododendron himantodes is charming, different and a comparatively rare species, not easy to propagate and grow but thriving in the sunken garden. We do not want to lose it to wet feet, as we call sodden root systems. 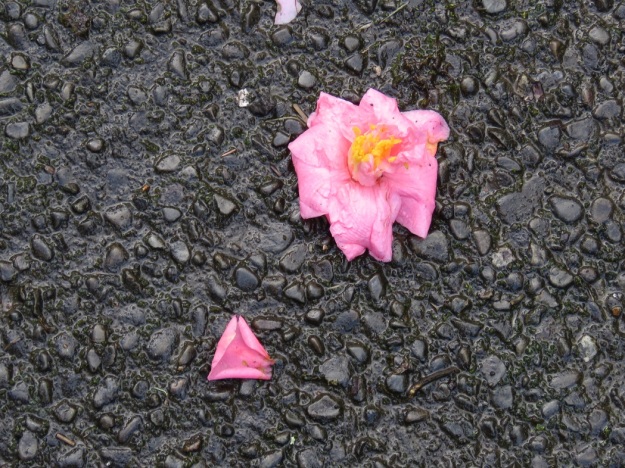 For reader Pat, who commented on this technique – this is the exposed aggregate look which, when combined with some dye in the concrete, makes new concrete look aged from the start rather than the glaring white of freshly laid concrete.