I am feeling the pressure of opening the garden again after seven years. All I can say is that if you want to see it, you had better come this year to the Taranaki Garden Festival (October 30 to November 8) because they way I am feeling, we may not open again.

We maintain the garden all the time to a level that keeps us happy but that is not the same as the level needed to reopen after such a long time closed. With seven weeks to go, there seems to be so much to do. We will get there – we are experienced at this – but it does take away some of the pleasure of early spring.

Spring has long been associated with anxiety in my mind. For seven years, from the age of 15 to 22, it was the time of major exams that could change the course of my life. I had nightmares about it all for at least two decades after that. Then spring became a pressure time for us when we were in business with the garden open, retailing plants and the never-ending demands of nursery production work. The last seven years have been bliss. Bliss, I tell you. With no external pressures or expectations of us, we have been free to take all the time we want to enjoy the daily sights of spring abundance and beauty. Whether we continue to reopen after this year will depend on how much we enjoy the festival and sharing the garden with visitors. It will have to be quite a lot to reward me for all the effort going into it right now.

A daily routine here but I admit that the photo was taken earlier when temperatures were warmer. Mark is not one of those hardy men who wears shorts all year round. 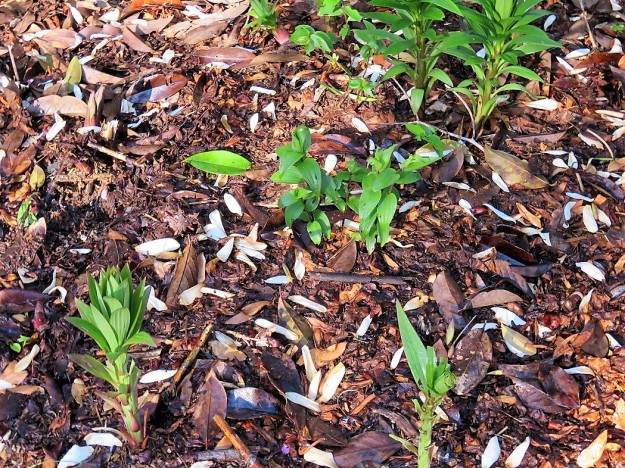 Emerging lilies. You won’t see the detail if you are reading this on your phone, but front right is the one rabbit-chewed shoot. In the past two years, all would have been attacked by now.

Regular readers may recall my despair at the rabbit predations this time last year. Mark and I were out sprinkling blood and bone after every rain to try and deter them. The auratum lilies are all coming through again and I am checking every morning. So far only one has been chewed off. This is testimony to Mark’s ongoing efforts with the gun. He has shot nearly 50 so far this year and that in a limited area of barely 2 acres. There are still a few around that need to be cleaned out and we dare not take our eyes off the ball – or the fluffy tails – because those few can increase exponentially (not unlike Covid, really) but man with .22 rifle appears to have the upper hand at this stage. In case you are wondering what we do with 49 dead rabbits, there is not much that the dogs enjoy more than fresh rabbit for breakfast.

I have tried cooking rabbit before – both casserole and pie but the only recipe I have really enjoyed is for rabbit and pistachio terrine (a recipe courtesy of Alistair Boyce) and it takes a bit of effort and pre-planning so I don’t make it often. 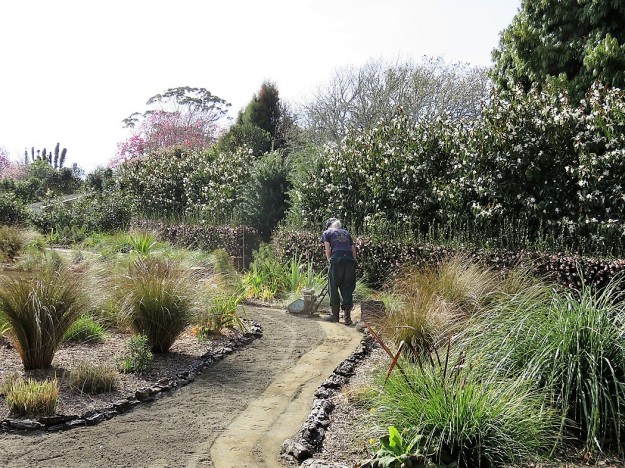 Lloyd in the process of compacting the base layer of pit metal. We borrowed the compactor from an obliging man up the road but they can also be hired. 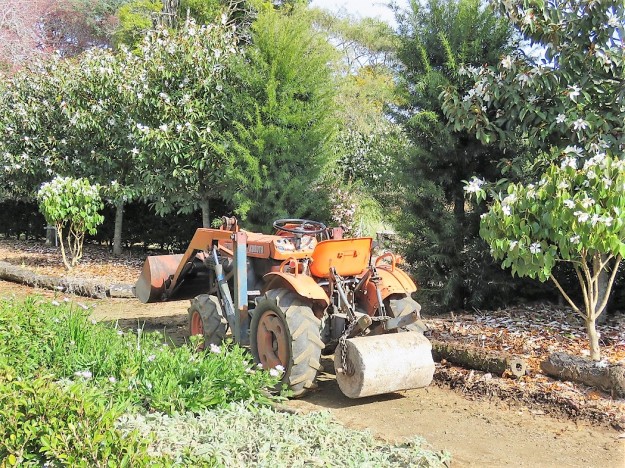 We bought this little orchard tractor over 20 years ago and it was already old then. It has done a lot of work in the years since.

We have laid the base course of pit metal for the paths in the new summer gardens. I say ‘we’, but that is in the royal sense. This has been Lloyd’s project. It took about 19 cubic metres and he did it with our baby tractor and wheelbarrow. We had thought we would get a bobcat in but Lloyd pointed out that the paths, though appearing generous, were just too narrow for the bobcat and some of the turns too tight so he thought it better to take the time to do it himself with minimal disturbance.

When it rains heavily, this path becomes the natural water course

He is only half way there. There is still the top layer of crushed limestone and shell to be laid but we are letting the base layer settle first. Heavy rains highlighted a problem: in one area, the run-off from downpours naturally flowed down one path and scoured out the newest set of steps every time. We can get away with quite a bit because our volcanic soils are very free draining and surface water is absorbed quickly (this never happens in clay soils). But our rains can be torrential and when that happens, the run-off will find its natural path. Lloyd is, by nature, a problem solver. He decided we needed a drainage channel in front of the steps, one that is safe to be walked on. Fortunately, this is an off-the-shelf solution. He has laid it with an imperceptible drop to one side (this is a man who makes a spirit level his friend) and then connected it to a length of holey, plastic drainage tubing hidden just below the mulch to disperse the water more widely. We are waiting for the next downpour but we expect the problem to be solved.

The first wintry blast struck this week and our mounga has put on his winter coat. In our part of NZ, these early cold blasts are generally brief – two days this week – and we are now back to mild, calm and sunny autumnal days. This settled weather can often continue through until the shortest day, which is only six weeks away now, when we settle into proper winter. By mid August we will warm up again and spring will be here so we mustn’t complain about a full-on winter that only lasts about 7 or 8 weeks. 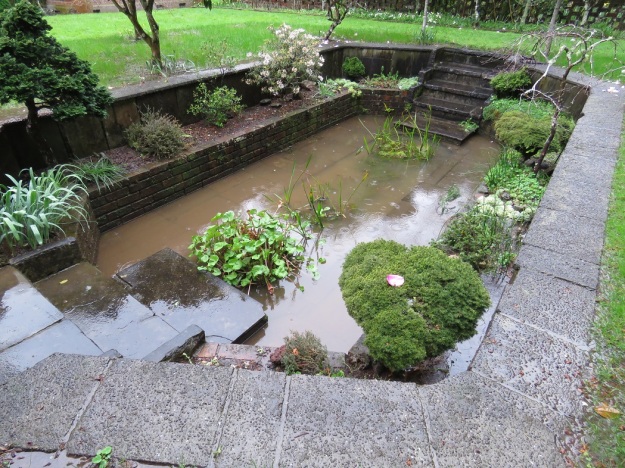 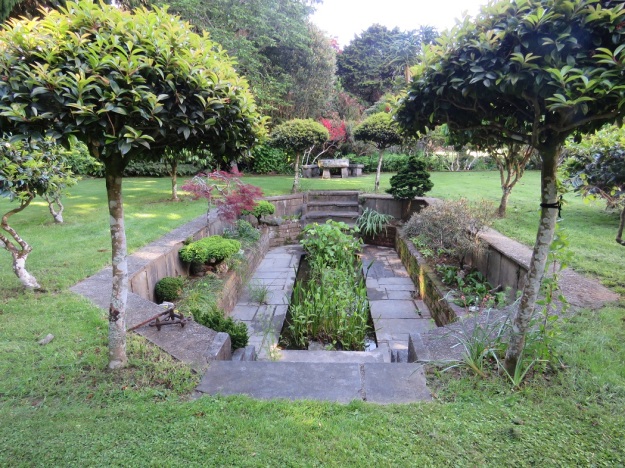 Eighteen months ago, I wrote about the unexpected consequence of flooding the sunken garden when we stripped out the surrounding garden borders that had clearly soaked up the rainfall in the past.  Fortunately, we did not rush into major work to rectify the situation because it turned out to be temporary. When the grass was fully established, the flooding issues disappeared. It is an interesting lesson in the importance of vegetation – even just grass – in preventing water run-off. Presumably all the roots create small channels, enabling the water to be soaked up by the ground where it falls. Bare soil is not good. It is a shame that the Council has never learned this. They still send out contractors to spray the roadsides, under the delusion that bare, denuded road verges channel the water away quickly, solving flooding issues. All it does is concentrate the flooding issues at the lowest point and prevent the ground from absorbing and filtering the water long before it gets to that lowest point.

I have also been thinking about the lessons I am learning in the new grass garden. Even with quite a bit of gardening experience, I thought I was planting at final spacings in the new grass garden when in reality, I was planting for immediate effect. I am now going through removing overplanting – just about every second Stipa gigantea at this stage. Many plants, especially grasses, look better to my eyes when they have their own space without competition. It is then possible to enjoy the shape of each plant rather than the massed effect where shapes become enmeshed. Maybe next time, I will have learned enough not to repeat the same mistake of overplanting. It is even more important with trees and shrubs which are not as easy to thin as perennials.

As we dropped down a lockdown level to 3*, Lloyd was able to come back to work. Physical distancing is not a problem here. I was very pleased to see him back. I do not drive the quad bike or the tractor – nor indeed the fancy lawnmower – and cannot manage a trailer so cleaning up after cutting back and clearing areas is much more problematic without him. With both his wife and son-in-law being medical professionals, he is extremely mindful of safe practices and the dangers of getting careless with regard to Covid, so we feel quite safe about him joining our home and workplace bubble.*

(*For overseas readers: we have our own Covid vocabulary in NZ and, thanks to the very clear communication from our prime minister, we all know exactly what bubbles and levels are and we have swapped out ‘social distancing’ for the more accurate ‘physical distancing’. With daily Covid cases down to one or two only, some days none at all, we are on track to eliminate the virus from our shores as long as we maintain border controls and quarantine. What happens longer term is as yet unknown but in the present, we are still alive and well, bar a few unfortunates.)

An autumn morn this week

Can I give a shoutout to our travel agent and the company she works for – Hello World? Against all expectations, she negotiated a full refund of both our long-haul airfares on Qatar Air and the travel insurance we took out for our cancelled trip to Greece and the UK. The money appeared back in our bank account yesterday. This was by no means a sure thing and many others have been left with airline credits, heavy penalty fees and financial loss. I am deeply relieved. None of us know when the world may open up again but in the medium term, we have our fingers crossed that the border with Australia may open soonish so that we can see our three children and grandson again.