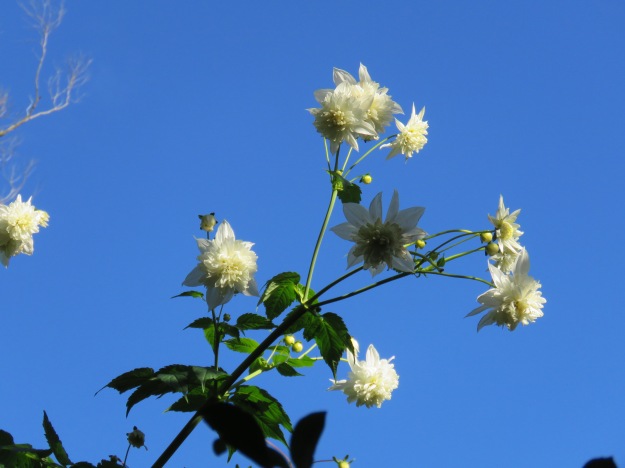 The white form of Dahlia imperialis

The last tree dahlia of the season is in bloom. Dahlia imperialis alba plena is the towering giant of them all, way up in the sky, not blooming until well into winter so particularly vulnerable to frosts and winter gales. I took this photo yesterday to show those in other climates the intensity of winter light that we get here on sunny days. It is different to those who garden where the winter sun hangs lower in the sky. We are not tropical; I don’t want to mislead. It is almost mid-winter and can be quite chilly. However, it is a lot less depressing to the spirits when you live somewhere with this clarity of bright light, even on the shortest days of the year.

We are now well into what Piet Oudolf refers to as the ‘fifth season’ and the new Court Garden brings me much pleasure, especially in the late afternoon when the sun is dropping lower and shines through the miscanthus grasses. I have used a lot of miscanthus running through the garden in waves and the plumes shine in the light and wave gently in any breeze.

I have finally found a place where this large yellow salvia can grow with sufficient space and it is a late autumn – early winter highlight. We have never had a name on this variety so if any readers can identify it for me, I would be grateful. It stands a good two metres tall so it is a large plant to accommodate. *** Now identified as Salvia madrensis, thanks readers.

Tips and techniques for the week: 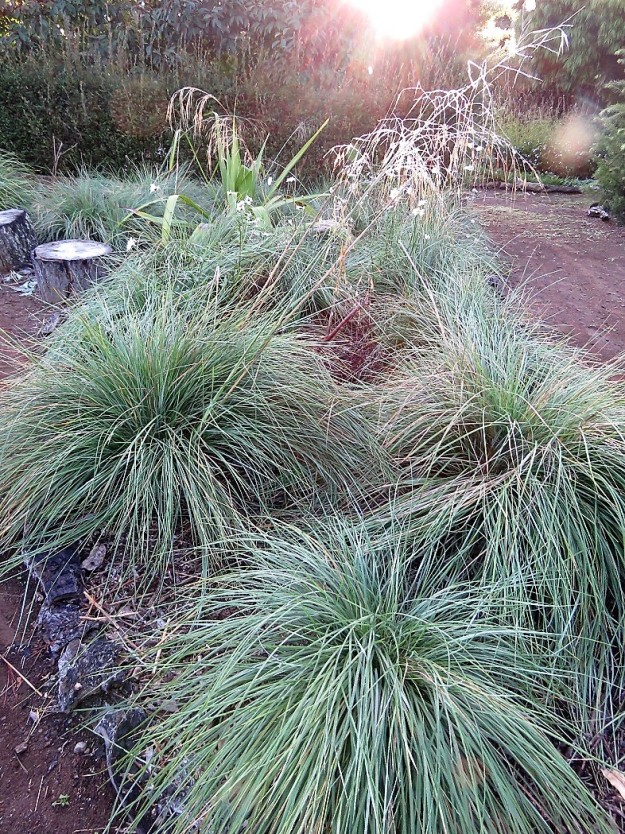 While we like the odd bit of sharply clipped hedging – which is essentially a green wall – we have never been big fans of buxus. In fact we have both been known to scoff at it as possibly the world’s most boring and over-used plant. A few years ago when buxus blight first appeared in this country, we made plans and built up some camellia options for hedging instead.

We only had four short lengths of box hedging last week. Now we have one and that is a low layer of a tiered hedge. The buxus blight had not struck but we weren’t that happy with two of the buxus hedges which did not keep good colour. Besides, the camellias were getting somewhat too large in the field and needed moving. 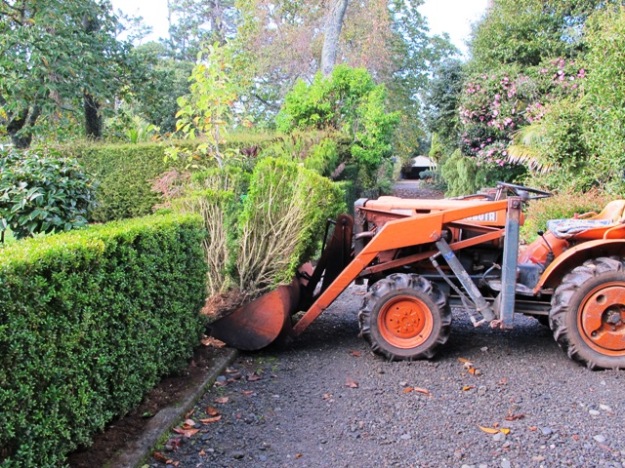 The buxus was gone by lunchtime. That is our handy little tractor which was one of our better purchases 15 years ago.

Our choice for beside the driveway was Camellia transnokoensis which has very small leaves and a mass of tiny white flowers in season.

That is our Lloyd planting the new hedge this morning. He is hardier than both Mark and me. We do not go around with bare legs as autumn draws into winter. The plants went in at about 40cm spacings. We will keep the final height to around 120cm.

We cut the new hedges back by close to half. This reduces stress on the plants which will have undergone quite a shock with their move and we want to encourage them to bush up and grow densely, rather than the taller, willowy growth. It should only take one or two fresh growths and the hedges should look as if they have been there from the start.

We think we will be much happier with camellia hedges than the boring old buxus.

With buxus blight cutting a swathe through many gardens, it is clear the problem is here to stay. We set out to review some of the alternative plant options. The advantages of box for low hedging include:

We have yet to find a proven like-for-like replacement, only plants that fit some of the criteria.

1) Lonicera nitida – ticks all the right boxes bar one, but that is an important one. Good dark colour, tiny leaves, easy to propagate, cheap… but it grows so rapidly that you will have to clip frequently. This may be as much as once a month in the growing season. It will get very twiggy and leggy if you don’t keep it tightly clipped. The same goes for teucrium which needs even more clipping and isn’t even green, though it does make an attractive hedge.

2) Myrtus ugni, usually referred to as the NZ cranberry. Little leaves, easy to strike from cutting, easy to train and can be kept low, delicious fruit but it develops bare patches. It is really only an option for the edible garden area and it won’t make a nice tidy little hedge that resembles buxus. It doesn’t like shade and can be thrip-prone. 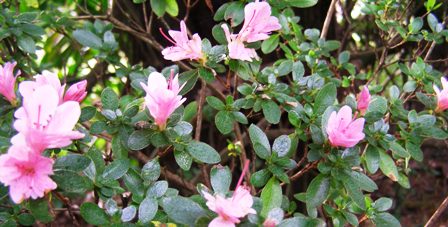 3) Gumpo or Kurume azaleas – these are the small leafed, low growing, evergreen azaleas. Good foliage, clip well, can be kept small though the leaves are larger than buxus and they have excellent shade tolerance. They flower, which some gardeners may not want. Gumpos tend to have larger flowers than the Kurumes. The big disadvantages are the expense per plant which will be prohibitive for many gardeners and the difficulty in sourcing large enough runs of the same variety. Some will get thrip (particularly the Gumpo types) so choose the variety with care. Evergreen azaleas are much easier to strike from cutting than most rhododendrons so keen home gardeners with a long term view, may want to try building them up at home.

4) Camellias – some of the slow growing, small leafed varieties are suitable though the leaves will still be larger than buxus. They trim well, resprout from bare wood and are a good colour. There is a limited number suitable for keeping down to a metre, let alone 30cm, so varietal selection is important. Camellias are not easy to root from cutting for the home gardener and can be expensive to buy. Microphylla and brevistyla set seed freely so could be raised from seed at home if you can find a parent plant. Itty Bit is a true miniature for low hedges. Night Rider is very slow growing, though ultimately larger in size. You could keep it to a metre but it will be expensive to buy. We have opted to go the camellia route in the event of our moderate metreage of buxus hedging getting blighted and have raised seedlings of C. microphylla in the nursery for replacement.

5) Euonymus – there are assorted selections of small leafed euonymus being hailed as buxus replacements, including one named Emerald Gem. These look promising but international reports are that euonymus are somewhat disease prone and local reports are that it can be thrip-prone which will rule it out for shady areas. We would recommend trying this as hedging in a modest way before getting too carried away and we have yet to be convinced of its long term merit. It should be relatively easy to root cuttings and is sometimes available in a hedging grade at a reasonable price.

6) Our friend Tony is sold on Melicytus obovatus, a native from northwest Nelson which takes clipping very well. In the wild it will grow to 2 or 3 metres (but common buxus can become a huge shrub resembling a small tree left unclipped). Plantsman Terry Hatch at Joy Plants is very keen on this melicytus and produces it for sale. As far as we know, it has yet to be tested in the long term (by which we mean as a garden hedge past a decade) but it is worth a close look.

7) Selected pittosporums will make good taller hedges but you are fighting nature to keep them to the low level of edging buxus. Their leaves are also correspondingly larger. The compact pittosporums, Golf Ball and similar selections, make a quick option for clipping balls and topiary, if you don’t mind the paler shade of green. Keep them in full sun with plenty of air movement too.

8) Corokia will make a good hedge and there are dwarf selections available but they are harder to trim if the new growth is left to harden. If not cared for, they can develop bare patches.

9) Twining Valley Nurseries in Pokeno are producing Ilex crenata ‘Helleri’ as a buxus sub. Ilex are the holly family and crenata is a small leafed species from Japan and Korea. It is recognised as a good hedging plant but I have only seen it in photographs and I don’t know how low it can be kept. It is worth investigating.

10) Our native alpine totara, Podocarpus nivalis, stays very low and can be clipped hard to get dense foliage. However, it is a long term option, it will be expensive to buy in quantity and it does not have the good green of buxus.

We have yet to hear of low hedges which have stood the test of time – by which we mean 10 years, not one year. Until there are more reliable reports, we would not advocate spending too much money and effort on major plantings of alternatives. There simply are no easy answers for a replacement for buxus and we keep coming back to the view that it may be timely to review the role of low hedges in New Zealand garden design.

For earlier articles on the topic of buxus blight and the role of buxus in a garden situation, check out:
* The appropriately named buxus blight
* There is life beyond buxus hedging
* Trouble with buxus
* DEBBO (that is: death by bloody buxus overload)