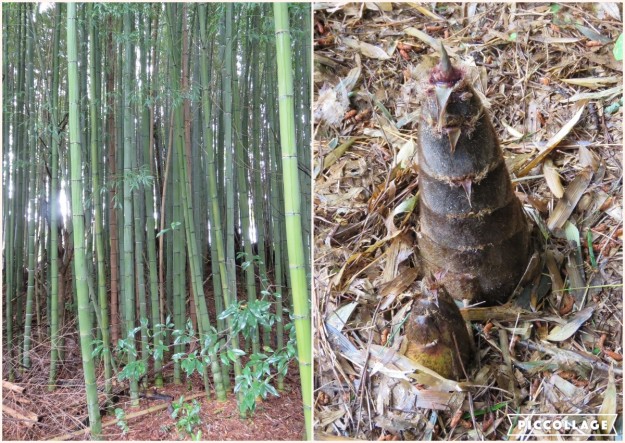 Our stands of giant bamboo are a never-ending source of disappointment to us. That is because they are enduring proof that the cargo cult does not work. The cargo cult is that school of thought that says “build it and they will come”. We often see it espoused in this tourist backwater where we live. Build a café/gondola/light rail/cruise ship terminal/tourist hub (strike out any which do not apply) and visitors will arrive. Well no panda bears have arrived here, is all I can say. I even checked that they eat Phyllostachys edulis – it is not their favourite bamboo but they will eat it.

We have one stand of giant bamboo confined on a small island in the stream where it cannot leap for freedom. The other is on a boundary and each spring we have to dig out the new shoots which pop up across the boundary fence. They grow extremely rapidly and would colonise the neighbour’s paddock if left to their own devices. This is Phyllostachys edulis and the second word is a clue – it is edible for humans as well as panda bears. There are many edible bamboo varieties – 110 out of 1575 known species. Apparently.

I tried blanching and freezing a few shoots last spring time and they stored well. Bamboo shoots are not exactly full of rich flavours and are more of a subtle and textural addition to stir-fries. My home prepared version is easily equal to tinned bamboo shoots, maybe superior because I keep them slightly crisper. This spring I am preparing more because I can see they would be a pleasant addition to salads and platters as well. 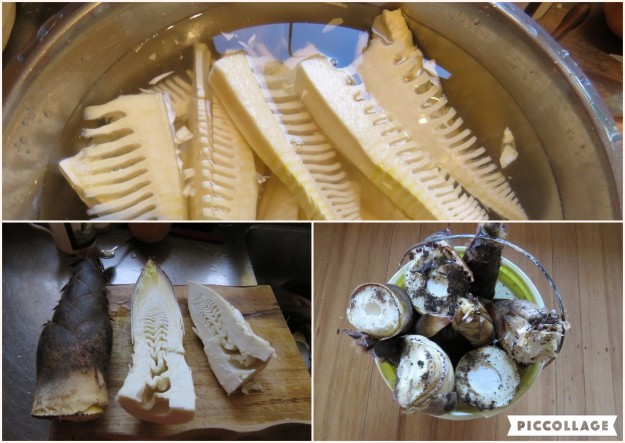 Top photo – prepared shoots waiting to be blanched. Bottom right, a bucket load of fresh shoots only yielded enough for 14 meals. Bottom left – the shoot is sliced lengthwise and then peeled.

Mark brought in bucket of young shoots and it yielded 14 packages for freezing – each being more or less equivalent to a standard sized can. They are easy to prepare. I slice vertically and then peel off the outer layers until just the lattice centre remains. At this stage, as Mark said, they rather resemble a pagoda in form. I slice them into centimetre thick lengths.

The pagoda look of a fresh bamboo shoot

I checked the internet for recipes. Bamboo shoots can be bitter and are not palatable fresh and raw. But I covered them with cold water and added a tablespoon of sugar, bringing them to the boil and simmering them for about eight minutes. I then discarded that water and covered them with fresh, cold water and a couple of teaspoons of salt. They were then brought back to the boil for another couple of minutes, then cooled and packed in meal-sized quantities, adding a little of the cooking brine. They are in the freezer. That is all it took. The bamboo season is but brief and we are eating freshly freshly blanched baby shoots this evening with dinner.

Each time we transit Hong Kong, we pause in awe to admire the bamboo scaffolding that often encases high rise buildings. It seems unlikely that Health and Safety inspectors in the western world would ever accept the use of bamboo scaffolding but it has a proven track record and would be a great deal lighter and easy to assemble and move than the heavy pipe scaffolding used in this country.

Just one view of Mark’s pruning efforts this week

In a garden with many trees, ladders are a part of our life. While our son, Theo, and I have been down in the park clearing the ponds and the stream of invasive weeds (lots of heavy raking), Mark has been up the top doing a round of summer pruning. Particularly cherry trees which need to be pruned right now, since summer is already morphing into autumn. You can see the extension ladder up Prunus Pearly Shadows to the right of the photo.

I am always in awe of how much material Mark can remove when pruning, without it showing except to the most discerning eye. This is a high level and under-appreciated skill though he does say it takes him a great deal of time looking before he ever makes the cuts. And he is forever up and down the ladders to look again from all angles and locations. For you cannot glue a branch back on if you get it wrong and find that you have just destroyed the shape of the tree by taking the wrong piece off.

Mark, being an agile and wiry man with very good balance, has given me the most alarming photos of how not to use ladders. Do not try this at home. He would like a disclaimer added that he is not stupid. He only does this with the ladder in a stable position and with something firm to hand that he can grab should anything go awry. Never with the chainsaw. He is extremely mindful of safety and caution with the chainsaw when mistakes can be fatal.

Because ladders play such a role in our lives, we were pretty interested in this permanent ladder structure seen attached to a tree in a tourist park in Jinghong, near China’s southern border. Presumably this tree is climbed regularly to warrant the construction of a ladder, although the reason why was not clear to us at the time. It can’t be that good for the long term health of the tree to have the wooden pegs bored into its trunk but at least they are not nails.

Who needs ladders, anyway? A friend shared this link via Facebook this week – how a Vietnamese tactical police unit climbs the outside of buildings with just a length of bamboo. No, it does not involve pole vaulting. We were pretty impressed, I tell you, and it has given Mark a new range of jokes about how we can dispense with ladders here and follow their lead. Who needs aluminium ladders when we have a wonderful resource of bamboo growing here? It would solve the problem of the oft-asked question here of where the ladders are when one of us need one and there are none in the shed.

LATEST POSTS
1) April 9, 2010 Our chaenomeles never get bletted – Abbie’s column.
2) April 9, 2010 Autumn is the best planting time here for the ornamental garden – garden tasks this week.
3) April 7, 2010 Summer has hardly waved goodbye but it must be autumn – the early camellias are in flower. Camellia brevistyla.

You wouldn’t credit how pleased I am with my new clothesline prop. While 95% of this country favours the rotary clothesline (originally styled the Hill’s Hoist, I am told), I quite like the nostalgia of the one wire strung between a dead tree trunk and another that looks as if it may be on the way out. This wire has served the house inhabitants well for 60 years and who am I to change traditions? The bamboo prop, however, requires replacement every five years or so. Fortunately we have a stand of this giant clumping variety on a small island in our park. Mark says he thinks this particular bamboo is one of the dendrocalamus family. There has been some resistance here to the suggestion that we could follow Asian traditions and build our own bamboo scaffolding when the upper story of the house next requires painting. The do-it-yourself ethos does not extend quite that far.