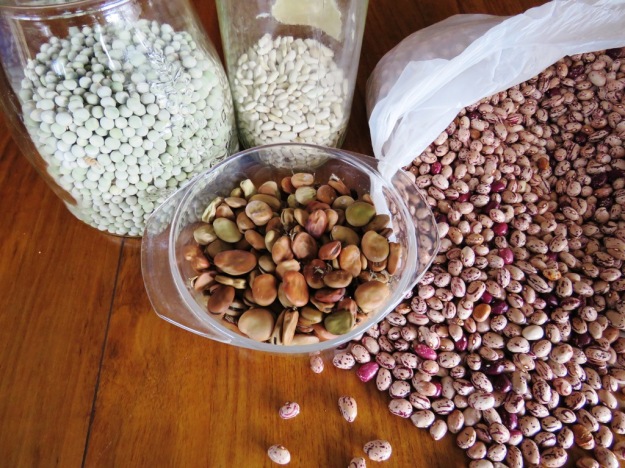 The bean mountain started modestly enough. It was just the surplus from the summer crops that Mark didn’t want to waste a few years ago. Dried beans had not featured large in our diet. Homemade hummus yes, but always with bought chickpeas. At least I started with dried peas and not the instant tinned version. Beyond that, we had never really moved on from the trendy mixed bean salads of the late 1970s. But the beans started to mount up at a faster rate than we were eating them.

At the same time, we made a conscious decision to reduce our meat intake. That started as one vegetarian meal a week, growing to be alternate evening meals of meat and vegetarian. Soon we found that the vegetable content dominated and meat-centred meals became rare. We are not vegetarian by any manner of means – I still use meat flavourings – but the meat content has become minor and often entirely absent. This change in eating habits has been driven both by environmental concerns and also evidence that as we age, a vegetable-centred diet is a great deal healthier. Bring on the beans!

Our beans have zero food miles and a very low environmental impact when it comes to production. I have nothing to do with the growing of them. That is entirely Mark’s domain. Fortunately he does the cleaning too. Sometimes I catch him sitting on a stool in the shed podding the dried beans while he listens to music. The compressor blows the detritus away from the beans in the 2015 take on winnowing. Having time for such simple activities is surely a sign of quality of life. 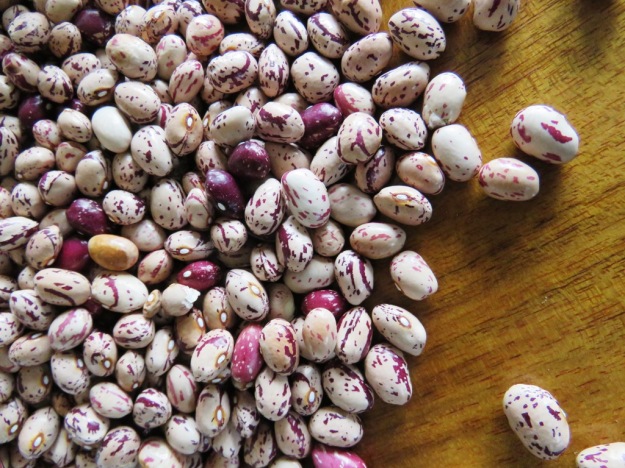 Borlottis are both decorative and excellent croppers

The one key element to increasing our bean consumption has been the discovery that soaking beans for a long time improves digestibility considerably. Our normal pattern is to soak for three days, changing the water twice daily. We took to adding the whey from yoghurt, acting on advice read from a moderately reputable source. It was only recently that I did a net search and found that whey is simply an acid and that vinegar or lemon juice can also be used. It is all about breaking down the troublesome oligosaccharides – complex sugars that the body can have trouble digesting.

I had NO IDEA that soaking beans was such a controversial topic until I did that net search. The internet is full of experts – hot soaks, cold soaks, soaking too long, not soaking at all, adding whey and/or other acids, adding baking soda, soaking on the bench or in the fridge, distilled water, rain water, soft water, added kombu. You can find whatever opinion you want. Alas, the one site I have failed to find again is the one I failed to bookmark – a scientific explanation in simple language, minus the woowoo and snake oil, explaining why soaking in several changes of water works.

All I will say is that we have found long soaking works for us. It also means that the cooking time is very short. 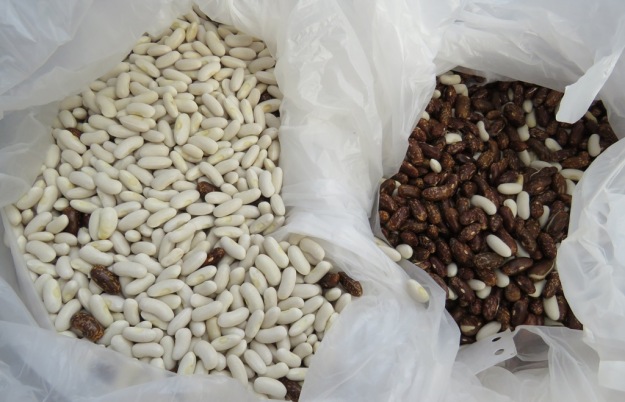 Variations on Phaseolus vulgaris with a little cross contamination

We have fava beans (broad beans), white beans, brown beans, an abundance of Borlotti beans and peas. For flavour, we favour the fava but without the addition of Chianti and body parts. They are also the most bother because each bean has to be individually de-husked. Generally, I cook them lightly (after the long soak) and then peel while warm. You get a feel for the timing and it is much easier if you get this right. Undercooked and the bean doesn’t pop out, overcooked and it breaks up. I am still trying to perfect the snack fava beans I tried in Malaysia – cooked then baked in the oven with a light spray of oil and a few flavourings. Bar snack style. I have reached the “these are quite nice” stage but not the “yum, these are delicious” goal. More often I use the fava beans for baked falafel.

There are a gazillion recipes out there but the other two standbys that I will mention are hummus and bean bread. Hummus does not have to be chick peas. Any bean will do. White bean hummus is probably my favourite. These beans can be a little bland in other dishes but are creamy and as tasty as any in hummus. Cornbread has become a favourite here, especially to accompany soup in winter, but required buying tins of creamed corn. Creamed beans, I found, are a perfectly acceptable substitute. I just whizz the cooked beans in the food processor with a little of the cooking liquid. 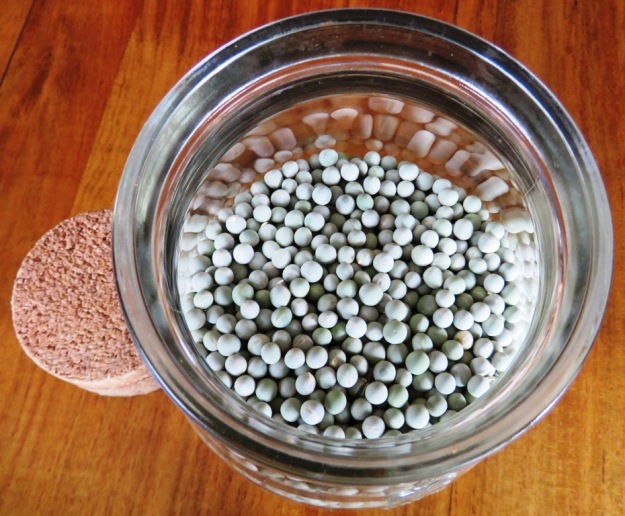 Peas are somewhat less versatile and a quick look on the internet tells me that most dried pea recipes are of the pea and ham soup genre or Indian curries. That said, apparently hummus from dried peas is just as successful as from beans but with a different taste. Once the soup season has finished, I will try that.

Botanically speaking, most beans are phaseolus and the largest number of beans grown by the home gardener are Phaseolus vulgaris. They are just variants within the same species although runner beans are P. coccineus. Soy beans are Glycine max (not such a productive crop here) and broad beans are Vica faba. Mark is planning to up the lima bean crop this year – these are P. lunatus. When beans become a staple in your diet, it is nice to have a variety of different types.

Bushy, low growing beans are usually referred to as dwarf beans. Runner beans are climbing beans and there are both perennial and annual types. The traditional climbing bean in this country is the Scarlet Runner. It is a perennial plant so it goes dormant over winter and rockets into growth as soon as temperatures rise. Perennial beans tend to be better in cooler climates because they stop cropping as soon as the temperature rises over summer. When treated as an annual and sown afresh each year, they have more vigour so many gardeners prefer to do this.

You can build a permanent climbing frame, though this means you can not rotate the crop. We have used chicken netting secured to side posts as a frame. Others like the look of trellis but these days we find movable tepee constructions more flexible.

The annual climbing beans crop more heavily. These are direct sown in spring to a depth of about 2.5cm at 10cm spacings. Depending on the variety, you will be picking in 2 to 3 months. It is the usual soil story for most crops that grow above ground – full sun, well cultivated, well fertilised soils and mulch the crop to retain moisture. The plants will simply stop producing new beans if they come under stress from summer drought.

It is the over mature, older style runner beans that become stringy. Picking every few days encourages the plant to continue producing and avoids the fiddly strings that need to be cut out. Try Kings Seeds catalogue for a wide selection of different bean varieties.

Variously called dwarf, green or French beans, these are an easy and reliable summer crop for the home gardener, even more so if you are willing to plant in succession to ensure continued supply. They are a staple in our garden and kitchen. The first crop has been sown and we will continue to sow another double row every three weeks until the end of February.

We sow the bean seeds about 10cm apart, with side by side rows as close together as 20 to 25 cm. Cover with about 3cm of soil. They do not require staking or a frame to climb on. Beans are a reasonably hungry crop because they grow quickly with plenty of leafy growth. Being a legume, they do not require nitrogen but a mulch of compost feeds the soil and stops the roots from drying out. They may need watering in summer – excessive dryness will affect the crop quality and quantity. Pests and diseases are minor and rarely require attention. You can expect to start harvesting from about eight weeks onwards so a crop sown now will be ready for picking in early January.

The favoured varieties here are Top Crop and Chef’s Choice. We are not so keen on the butter beans but they are just as easy to grow. The attractive Borlotti Fire Tongue Beans have to be eaten very young or allowed to mature and used as dried beans. The stage in between is not so nice. There is some debate about whether green beans are safe to eat raw – we err on the conservative side and lightly blanch them.