I meant to do a round-up across the different hellebore types we grow here this year but I left my run too late. There is more to hellebores than just the most common H. orientalis types and some of the other species and inter-species crosses are also interesting and fill a different niche in the garden. But I had to make do with mostly H. orientalis and a few hybrids for today’s picking.

We are very impressed by the garden performance of the hybrids from UK breeder, Rodney Davey and sold as his ‘Marbled Group’. So impressed have we been by ‘Anna’s Red’, ‘Penny’s Pink’ and ‘Molly’s White’, that we added ‘Ruby Daydream’ and ‘Sophie’s Delight’ this year. There are more in that range but whether they have come into New Zealand yet, I don’t know. All are characterised by excellent marbled foliage which is most appealing and outward facing flowers that sit above the foliage. The first three named above also appear to be sterile, which is a good thing as far as hellebores go. Many hellebores can be promiscuous seeders. The Davey group are a big improvement on many of the orientalis types. His hellebores are hybrids so have mixed species parentage but I haven’t seen the details of what he has used made public anywhere and we would never criticise him for keeping that information to himself. There are way too many people out there just waiting to copy, as we know to our own cost, and he has put many years of work into getting this new strain of hellebores. If you are in the market for hellebores, buy them.

The same can not be said for hellebores ‘Jacob’ and ‘Josef Lemper’. I bought them both last year because they looked terrific in the garden centre. Josef collapsed and died within weeks so I even bought a second plant because I liked it, despite them both setting frightening amounts of seed. This year – nothing. I know where I planted them but if they flowered again, it was so insignificant that I failed to register it and the plants that I think are them, are but poor specimens now. There is a big difference between having a brilliant looking hellebore in a pot and garden performance. This all makes more sense now that I realise they were H. niger, not H.orientalis  as I had earlier assumed, .

Look at the flower power of Angel Glow in the garden

‘Angel Glow’, bought at the same time, is a beaut. It is another hybrid and it has mass flowered two years in a row. If it keeps on doing as well, I will be delighted. The ever-handy internet tells me it is an H x ericsmithii selection which makes it a three way cross between niger (which gives it the upward facing blooms) and sternii which is itself a cross between argutifolius and lividus. I just give you that information in case you wanted to know. It makes it very different to H. orientalis but it fills a similar niche in the garden as a plant. The pretty H. niger is forever disappointing in our climate (I think it wants it drier and colder) but the hybrid vigour of ‘Angel Glow’ sets it apart from that parent. 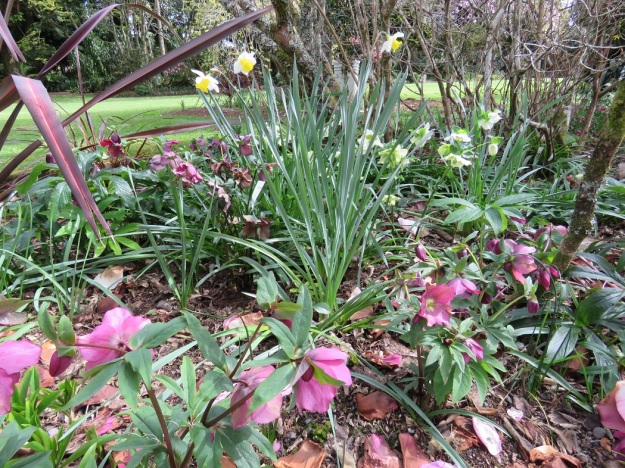 The border was looking better this year

I redid our 30 metres of Helleborus orientalis border three years ago. After decades of easy care gardening, it had lost much of its charm. The next two years were a bit ho-hum in performance but it has come into its own this winter. Hellebores can take a little while to establish well. Most of the plants I used were ones Mark has raised in his quest for better garden performance – so with longer stems of sufficient strength to hold the blooms above the foliage and with outward facing flowers.  We have a fair old mix of established shrubs in the border so keeping the underplanting primarily to hellebores gives it a certain unity. But I also added a whole array of odds and sods in bulbs – mixed dwarf narcissi, snowdrops, cyclamen and bluebells in the main but also other strays that would perform in semi shade. It adds another layer of interest through winter and spring and it has been very pretty this year.

The slate shades can look better picked than in the garden…

… but add white and the contrast makes them sing

Mark is not keen on murky pinks, is scathing about most green flowers and doesn’t like pink and green colour mixes so most of his seedlings are either red or white. We had also been given some of the newer slate colours and have a few doubles carried over from when they were the rage. The slates are a really curious shade when you look at them closely but that colour tends to be quite flat and dead in a garden situation unless surrounded by plenty of white. The plants we have all hang their heads, too (downward facing flowers). This is also true of the double hellebores – the weight of the flowers makes them downward facing, which is not so great in a flat border.

There is quite a bit of trial and error on garden performance with H. orientalis. When they are good, they are very, very good. When they are not, they can be disappointing, even more so if you have gone out and paid garden centre prices for a plant that looked great at time of purchase but never as good again. And it is not so much a gap as a gulf between a good hellebore and a very ordinary seedling one.

Sunday was wet and gloomy so I picked hellebores to photograph indoors. And what a wonderful subject for photography they are. All I did was collect one representative bloom from a number of plants. This was more illustrative in intention than artistic endeavour.

These are all H. orientalis or orientalis hybrids, a mix of plants in the garden and some selections Mark has raised. We have been talking about them recently because our main 30 metre hellebore border is in dire need of major work. It has passed over from being a pretty, low maintenance area to being patchy and underperforming with too few blooms and too many of those are murky colours. We plan to gut it, replace some of the soil and replant with strong, new plants – each standing in its own space rather than aiming for the uninterrupted carpet look. This is because we have noticed that the plants we have thriving in other areas are in well cultivated soil, each on its own and not competing with its neighbours for space. We will fill the gaps between bulbs – Cyclamen hederafolium, narcissi and bluebells all combine well with hellebores. 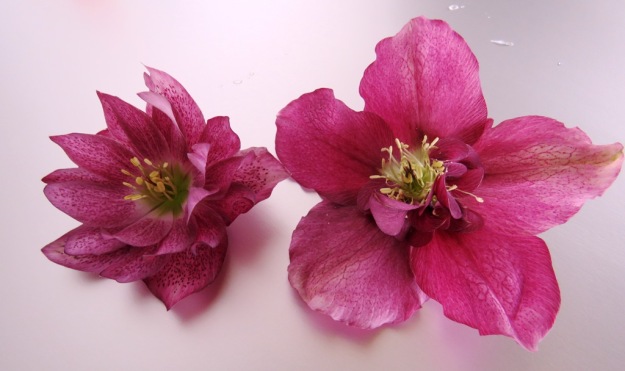 Mark has been raising hellebores in the nursery, in preparation for the upgrade. And he is interested in whether he can get better performing selections for our conditions. Generally, hellebores like a colder climate and the best ones we have seen are in areas with much more winter chill. The very dark flowered ones with bluish tones – referred to as slate – are not exactly booming here. Similarly, the doubles that we, and every other keen gardener at the time, rushed to purchase don’t seem to get much larger and showier than they were when we bought them over a decade ago. Mark’s seedlings may perform better though the wonderfully large pink with petaloids is probably blown up by nursery conditions. In the garden, the flowers may scale down.

The merits of longer stems

What he is most keen on is getting strong stems which hold the flowers above the foliage. So far, that seems to be one of the most desirable features of the recent releases out of the UK – Anna’s Red and Anna’s Pink. They display their blooms well. Because the reality is that when you pick hellebores and display them face up, they are hugely charming as seen in photos. But more often, they are nodding downwards and barely visible in the garden. You could of course follow the lead of a hellebore enthusiast we once met who had a mirror on a long pole so he could view the flowers without bending. Or you could glue mirrors to your shoes – but take care, gentlemen, never to wear such footwear to town lest the reason for the mirrors be misconstrued.

We have worked out that the desirable dark colours display far better as garden plants with the contrast of white flowers alongside. We will also banish all the murky ones to the compost heap. While clean pastel pink and green can be a charming combination, in hellebores these often lean to muted shades which are frankly of no merit. We also want plants that will fade gracefully and not to that dirty greenish brown which does not lift the soul.

We would like the hellebore border to shine again with the gentle charm that this plant family offers.

Earlier posts about hellebores include:
Hellebore Anna’s Red
The autumn trim (removing all the old foliage)
Helleborus x sternii – one of the few green flowers Mark is happy to accommodate here.
The double hellebores. 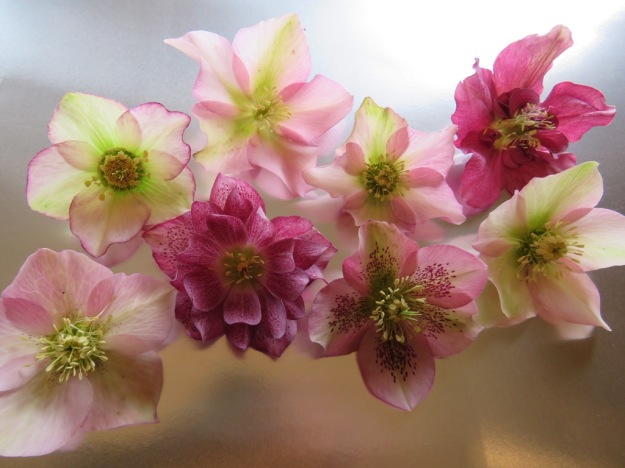 Hellebores are quiet heroes in the winter garden. I have never seen a strident one. By far the most common hellebore is H. orientalis – though it is not from the Orient, being native to northern Turkey and Greece. It is a perennial which keeps its leaves all year round but in our experience it is not one that appreciates being dug and divided. Plants subjected to this routine can sulk for a long time afterwards. You are better to salvage some of the many seedlings you get around plants if you want more.

Given their origins, it is not surprising that these plants are happy to lead their quiet existence in fairly tough conditions, coping with root competition and shallow soils. This makes them ideal for semi shaded, dry areas beneath trees where it is not always easy to find suitable plants. However, they won’t appreciate dense shade. Lift the canopy of overhanging trees and shrubs to get more light.

Most hellebores come in shades of dusky pinks, reds, greens and white – or sometimes in blends of these colours and they often change colour with age. There are some highly desirable deep red and slate colours – the latter bringing blue-purple tones. However the performance of these appears to be temperature related. The colder your conditions (and these are cold hardy plants), the better colour you will get. The best ones we have seen were in Taupo and the UK where winters are considerably chillier.

If you have prized cultivars, keep them separate if you are hoping to raise seedlings. They are promiscuous plants and will cross readily. That said, to my mind, hellebores look best in big patches or drifts. Interplant with winter and early spring bulbs (bluebells, snowdrops, smaller growing daffodils are our preferences) to add interest.