Meet ‘Jade Cascade’. It has an appealing name though, to be honest, there is nothing jade about it. It really is a plain, somewhat dull green though it has attractive long ribs running the length of the leaf. It does at least cascade, or maybe it fountains, from its central point. And it is simply a terrific and eye-catching performer in the garden.

When we used to grow hostas commercially, we had maybe 40 different varieties in production. ‘Jade Cascade’ was over-shadowed by the showier members of its family and it did not sell well. Most customers did not want to buy a plain green hosta. No, they wanted the big, showy, variegated ones and the new releases. I would counsel that it is the plainer hostas that show the fancy ones off to better advantage and that planting a whole mass of striking variegated ones looks a mishmash. My wisdom was not totally ignored – customers would buy the solid coloured gold or blue ones but green varieties? Rarely.

When we went out of production, I planted many of them out in the garden and that is a very interesting exercise. Some, like ‘Jade Cascade’, have romped away and gone from strength to strength. But not that many. Of the newer varieties we had in the nursery, many have just quietly languished, doing very little. The greatest disappointment of all was ‘Great Expectations’. Aptly named, Mark says. We had great expectations of this showy, variegated variety though we had decided it was too slow to be commercially viable for us, even in optimal nursery conditions. It became Unfulfilled Expectations before transitioning to Disappointed Acceptance. Despite being given optimal conditions (well cultivated soil, plenty of compost and humus, little direct competition, summer moisture and semi shade), the plants have languished. They are still there after many years but have failed to do anything of note, let alone increase and thrive.

Pot culture in nursery conditions is one thing. Hostas are a really easy nursery crop to get looking large, lush and enticing given the controlled conditions of a production nursery. We came to the conclusion that in the quest for the new and the novelty, hosta sports were being separated off and trialled but only in nursery conditions. Garden performance is very different. We have seen the same thing with hellebores and have even bought some which looked simply terrific in the garden centre but failed to replicate that performance once put into garden conditions. Consumers can’t generally tell whether the plants they are looking at in a garden centre have been rigorously trialled so it becomes a case of win some, lose some. Were we ever to go back into business, I think I would sort out a range of tried and true performers.

‘Jade Cascade’ would earn a place close to the top of such a list. Plain green it may be, but it has a most graceful form, good slug and snail resistance and a robust disposition. In its quiet little way, I find it draws my eye every time I walk past the area where it is growing. That is a good plant.

November sees hostas looking their very best. We used to grow hostas when we were still running the nursery. From memory, it was in the vicinity of four or five thousand every year, year in and year out, across maybe 35 different varieties. There is not much we don’t know about propagating and growing this plant family in containers. We always sold plants raised by division – not from tissue culture – and earned a reputation for a large and luscious grade.

Growing plants in a garden is different and now that we are gardening full time, we have taken a great deal more interest in their long term performance. Not all hostas are equal. Nor are they quite the low maintenance plant that is often claimed. Once the ground around them starts to compact, it is not uncommon to suddenly realise that a well-established clump has reached the point where it is getting smaller not larger. Smaller clumps which are not thriving may disappear altogether, even though they are in the recommended humus-rich shade. They like cultivated soil and will do better if given better conditions, especially the touchier varieties. 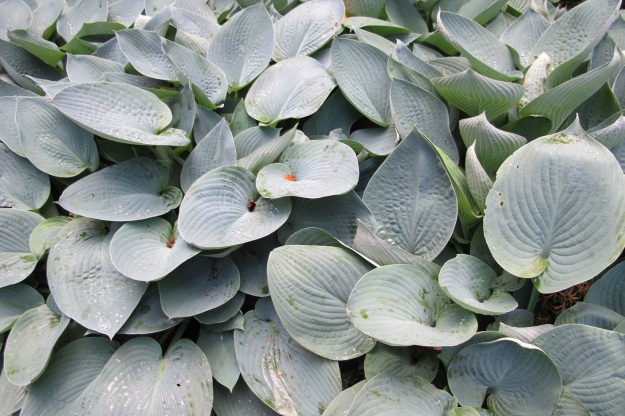 The one exception has been a run of big blue hostas that Mark raised from seed. These are still handsome, large and fine after maybe two decades with absolutely no attention at all. The same cannot be said of all varieties. Alas, a number of the fancy newer ones are better in pots than the garden.

There is no doubt that hostas are a highly desirable dish on the smorgasbord of slug and snail food. I have seen plants eaten away to almost nothing, particularly in UK gardens where they seem to have a much worse problem than here, though I have been told Auckland snails may rival them. Should I therefore whisper that we don’t seem to have a big problem here? We so rarely use snail bait that neither of us can ever remember where the packet may be. Instead, we have reached an accord with the birds and they carry out constant pest patrols to keep the critters at bay. But if you are resorting to baits, remember that they are a poison, not a fertiliser. You only need two or three pellets per plant and more is not better. If you are not a slug bait fan, I did try the technique of baker’s bran and found that worked. Circle the plant generously with bran. I don’t think it actually kills the slugs and snails but they find it so irresistible they can’t stop eating it. Once in the gut, it swells and they lie around in a bloated fashion til the morning when the birds find them. Think of it as adding protein and fibre to the ornithological diet rather than subjecting them to toxins.

Softer leaves are more vulnerable to critter damage, so if you have an issue, go for the varieties with tough, almost leathery leaves. 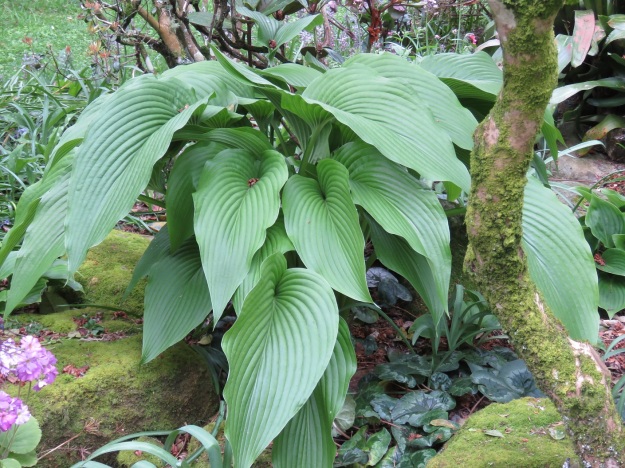 When it comes to locating them in the garden, it will be no surprise that we go for mix and match. Hostas love similar conditions to clivias, ferns, some of the primulas, meconopsis, Chatham Island forget-me-not and other plants which we use in damper, cooler situations of semi shade. They are not so keen on deep shade and will turn all green if they don’t get sufficient light. Gardeners in colder climates have more leeway in terms of sunnier positions but the yellows and pale variegations burn in the summer sun here. 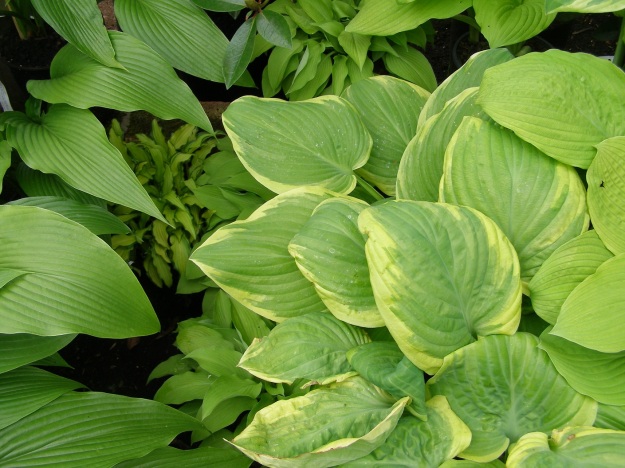 Many gardeners seem to prefer to group their hostas together in a hosta bed. It is not compulsory to plant them this way but if you prefer this look, I will repeat my advice given often to customers back in the days. Don’t be wooed into buying only the showy, variegated ones and bunging them all in together. It is the plainer hostas in single colours, and the variety in leaf form, shape and size that set off the fancy ones and avoid a mishmash. One fancy one to at least three plainer ones is my rule of thumb. These days, our preference lies with the solid coloured ones rather than variegated varieties.

Hands-on gardeners know that big clumps of hostas can be dug and divided in the same way as any other perennial plant. In terms of timing, it is best to do this in winter or early spring in our climate.

Running a mailorder business taught me never to take anything for granted. Hostas are deciduous, a fact that eluded one customer. “I am not happy with my order,” she wrote. “It looks as if there has been a rabbit in the box, eating the foliage. Or if they are deciduous, I don’t want them.”

It is the fresh foliage in spring that is the highlight for this plant family and some varieties will follow up with a showy floral display in shades of white, blue or, most commonly, lilac-purple shades in summer.

First published in the November issue of New Zealand Gardener and reprinted here with their permission.