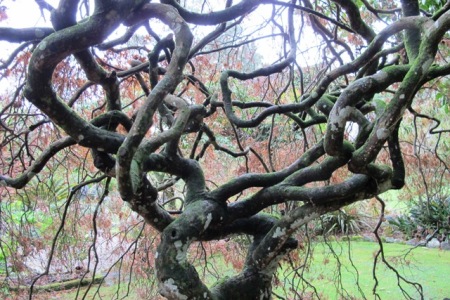 Finding the shapes within the plants, in this case a maple

“People don’t know what to do with the garden when they get to year fifteen,” commented the retired gardener who was visiting us last week. “You need to do quite big things.” I grabbed a pen and paper to record his words because he is so right. We know exactly what to do with young gardens in this country, but too few know what to do as they mature and change.

The general age of crisis was set at fifteen years but that is a reflection of the rapid growth rates we have. It could be twice that in colder climates. The point is that at some stage, you wake up to the realisation that your garden is not how it used to be. The trees that you planted too closely in order to get a quick effect have now grown too large for their allotted space. Similarly, shrubs have outgrown their area and you are either madly hacking them back every year or you have stopped walking round the house on the path and have been forced sideways to avoid the dripping foliage. Your hedges seem to have grown wider than you intended and nearby plants appear to be suffering. The bulbs aren’t flowering as well as they used to. In fact a fair number seem to have disappeared altogether, as have the choicest perennials. It is the thugs that are left and even they are struggling in some areas which are now heavily shaded. The clumping perennials have become enmeshed together with bald areas showing and weeds popping up throughout which you can’t spray or pull out because they are so intertwined. The garden looks tired, lacking the freshness you remember from earlier days.

You are not alone. It is a natural part of the ageing process of the garden. In this country, most people leave the problem behind by selling up and moving on and the new owner is likely to cut it down and start again. The problem comes if you don’t want to move. That is when you need to do some quite big things.

Most people try and regain the earlier freshness and juvenility in the garden because they can’t see beyond that option. It used to be so pretty, you know. So poor plants are either slaughtered and removed, to be replaced by younger, smaller models. Or they are brutally cut off in their prime and reduced to ground level in order to “come again”. I have seen it done repeatedly.

The alternative is to learn a whole new set of skills. These are not skills that you often see demonstrated in this country because we still lack a heritage of long term gardens. First off, do not make the mistake of thinking that your garden is mature at 15 years. It isn’t. It is really just a gangly adolescent relying on your guidance to take it through to adulthood. On more than one occasion, we have had garden owners gushing that it is just wonderful having mature trees when there is not one single specimen that is older than 20 years. Fast growth we may have, but maturity in trees takes somewhat longer than that. 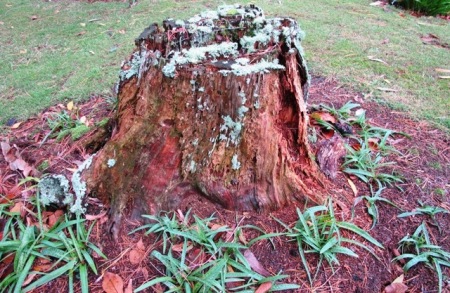 Leaving tree stumps to rot out in their own time is not without risk though many of us do it.

But it is a common fault to overplant gardens, both large and small, in the early days. At some point, you need to reassess and work out which are the key long term plants worth saving and which are expendable. You may need advice. The ones that are staying are the foundations to take the garden through to maturity. Be ruthless about the expendable plants in between. If you just cut woody plants off at ground level and leave them to rot out over time, you run the risk of opening up the whole area to armillaria (honey fungus) which starts in decaying wood but can then romp through killing healthy plants as well. Best practice is to get rid of the stump and many of the roots, especially willows, but that does not come without money or effort. Convenience and economy means that we often just take our chances.

An example of lifting and limbing over many years.

Then lift and limb and let light back in. Plants need light to grow, even in shade gardens or woodland. Make tree loppers and a pruning saw your friend. But you don’t have to have the light beaming straight down from above. If you lift the lower branches and thin the plants, you allow light in sideways. It also creates views through and brings welcome changes of light and shade.

Now is the time to develop skills in shaping plants. This is not beating them into submission. It is negotiating to make the most of the plant’s best features by highlighting its good form and shape. By now you are working in an environment which has height as well as width and depth. It is a lot more fun than weeding – and on the bright side, weeds are fewer in shaded gardens.

It is just a different way of gardening and these are but the first steps. If you are floundering a little, take heart. It takes time to learn new skills (and some never do). But if you have a garden which is now in that mid adolescent phase, take a hard look because you will need to do something quite major with it sooner or later. 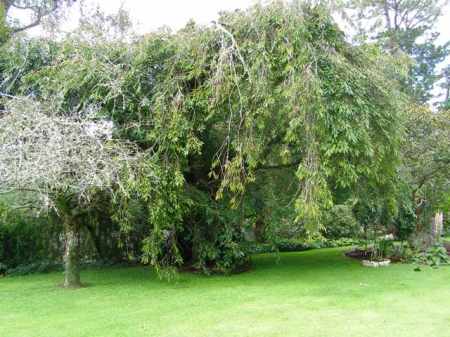 1) This garden aspect is generally all right but you would not look twice at it. The large tree is a weeping cherry, Prunus subhirtella pendula. The fact that the left hand tree, a malus or flowering crabapple, has no leaves on it in high summer is a bit of a giveaway. It is dead. 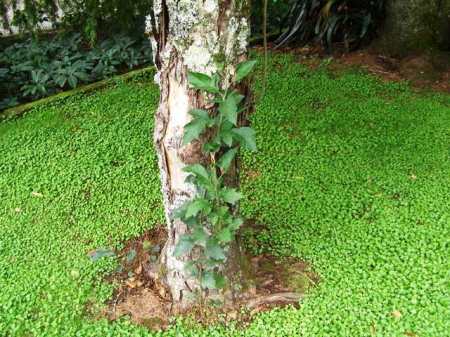 2) The malus is showing fresh growth at its base but as we knew it was a grafted plant, this is just the root stock growing away. 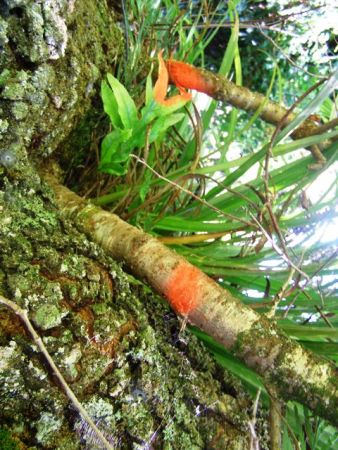 3) Spend some time working out which branches need to be removed. You can’t glue branches back on and it is surprisingly easy to make a mistake. We are taking off the lower branches and a few higher ones which extend too far over the adjacent gardens. We used a squirt of paint to mark the branches destined for the chop. 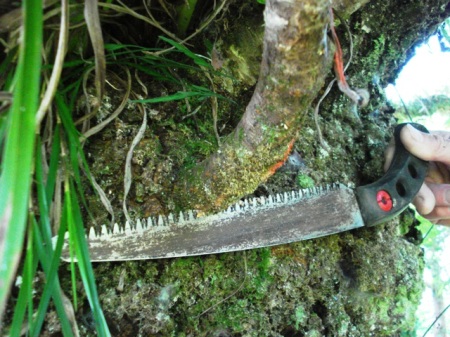 4) Make an initial cut underneath the branch. This prevents the branch from ripping off and damaging the bark when you cut from above. 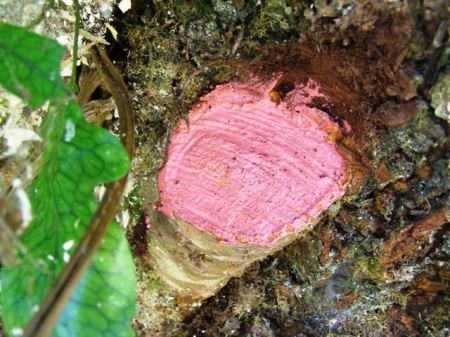 5) Cut close to the trunk or main stems. Don’t leave ugly stumps which resemble protruding coat hooks. There are different schools of thought about whether wounds need to be painted with an antibacterial paint. In this case we have coated the wounds but we don’t usually bother. 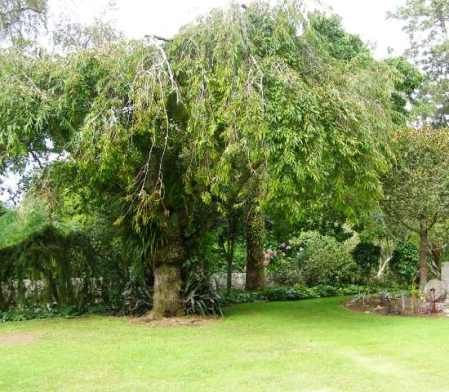 6) The dead malus has been removed entirely, even the main stump. If you can get most of the root ball out, it reduces the chance of honey fungus or armillaria getting established on the rotting roots and potentially spreading to surrounding trees. The cherry tree now has a more pleasing shape and it is possible to see beyond the tree and to notice other garden features in the same view. Successful pruning is often discreet – quite a bit of material is removed without it being obvious where it has come from.

February 26, 2010 Monarch caterpillars and butterflies – a safer mid-life obsession than buying a Harley-Davidson.

February 26, 2010 Flowering this week: Justicia carnea (the candlewick bedspread of the plant world).

February 26, 2010 In the Taranaki garden – garden tasks and hints for the coming week. 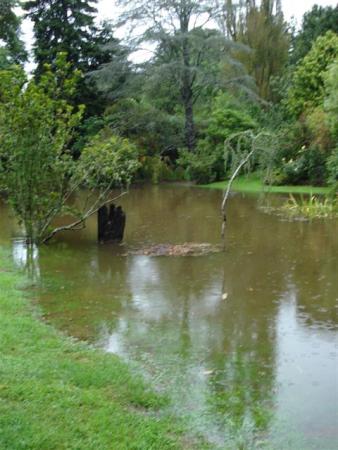 There are good reasons why we are always green in Taranaki. In this case it was summer rain yesterday morning – around 10cm in a very short space of time. The water disappears nearly as quickly as it arrives and within ninety minutes of taking this photo, the sun was shining again and the flood waters had receded entirely.