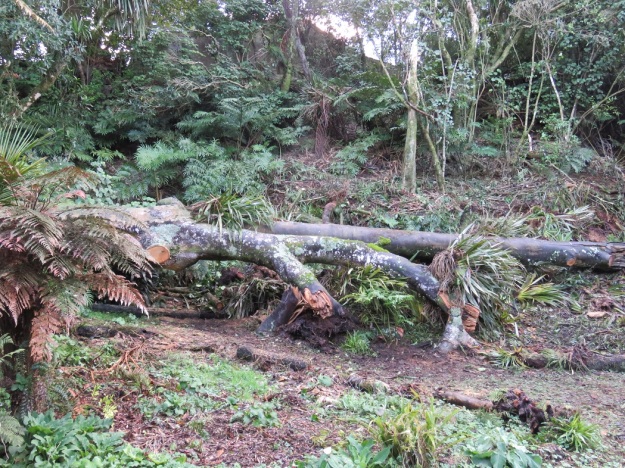 It took Lloyd 10 days of determined work to clear up after the fallen tawa tree. It was a big job. He has hauled out many trailer loads of firewood and dispersed most of the vegetation. What is left now will stay in situ and we will work around it. The trunk will outlive us.

One path is still blocked unless you are of small stature and willing to crouch to pass beneath the trunk. It is likely that it will be left like that. Mark and I will continue to use the path but others will take the easier route. You can see the epiphytes still clinging on to the fallen trunk.

When I wrote about the weight of the tree coming down, Canadian gardener, Pat Webster, commented: “To think that the weight of epiphytes could contribute to its demise makes my head reel… this is not something I experience in Canada.” It hadn’t really occurred to me that this is a distinguishing feature of mature trees in this country but of course it is. The collospermums are not referred to as widow-makers for nothing. You would not want to be beneath a falling cluster but apparently a number of the early pioneers and bushmen were.

In New Zealand, we usually refer to our remnants of original vegetation as ‘native bush’. Sometimes ‘native forest’ but commonly ‘the bush’. Even forest may be misleading. It is more like cool climate jungle in reality – near impenetrable at times, almost entirely evergreen and layer upon layer of vegetation. Perfect conditions for epiphytes to get established and a frightening experience for those early settlers who arrived expecting something more resembling England’s rolling fields and rather sparse woodland. 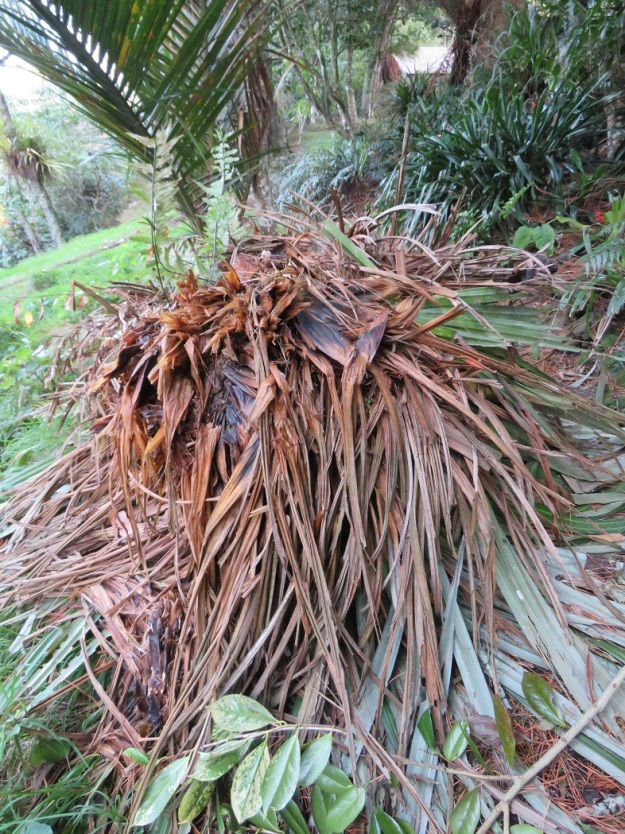 I was thinking of Pat’s comment when I came upon another clump of collospermum that is waiting to be dismantled and removed from a path. This fell off the stem of a tree fern – the very one in this photo which still has several remaining. The abundance of epiphytes is presumably an indication of our high humidity, regular rainfall, absence of both extreme cold and extended dry periods and the predominance of evergreens giving shelter.

The demise of the tawa tree brought down several self-sown tree ferns (known here as pongas). One or two it uprooted and launched into the air as spears – or maybe javelins. They embedded themselves into the soft ground and stream bed by their crowns. Lloyd asked me if I had plans for the ponga stems, which can last for many years in some situations. Well yes, I did.

The new lily border needs an edging to keep the mulch on the bed despite the birds and rabbits scratching. I had wondered using the rusted steel edging, often referred to as Corten steel. I really like the look and it weathers gracefully, while, I understand, being flexible enough to bend around curves. I did a quick calculation of how many hundred metres I needed to edge the new Court Garden and to highlight the curves of the lily border and the caterpillar garden and looked on line. Yes, I really like the unobtrusive crispness of Corten steel edging but I don’t love it several thousand dollars’ worth.  That is a lot of money that I could spend on an overseas trip that will inspire me and bring me memories. Garden edging may please me but it is never going to inspire me.

When the compromise is tree fern or punga lengths

The ponga lengths will have to do and are arguably more suitable for our relaxed style. They come already furnished with an abundance of softening epiphytes and they are free. I will get over my passing disappointment at taking the easy option over expensive aesthetics.