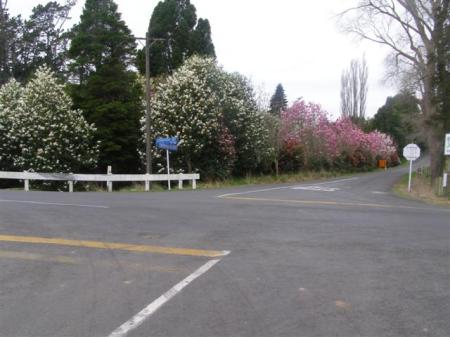 The view from the corner today

Winter may have struck early and cold here this year, but at the other end of the season a magical spring has arrived early. With no wind and fine sunny days, temperatures are now reaching up to 18 degrees celsius and the flowering is terrific. The early campbelliis have been and gone, as has Lanarth, Vulcan is just past its peak, sprengeri diva is flopping, sargentiana robusta and Sweetheart are at their peak. Felix Jury looks fantastic as does Black Tulip. The soulangeanas and mid season hybrids are all opening, including our newest release, Burgundy Star. 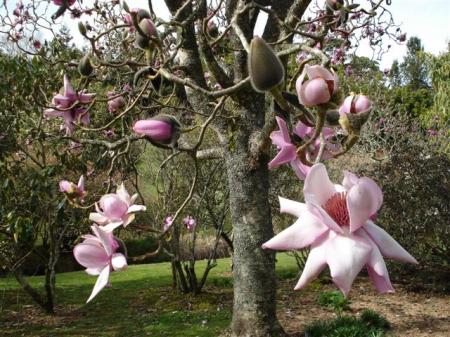 Felix Jury’s main output using the magnolia he named Mark Jury are all in the early stages of opening, as is Mark. Manchu Fan is opening – this hybrid performs really well here for us in the reliable, smaller growing white goblet class. Ruby, planted next to Manchu, is pretty ho hum here, as is Rustica Rubra. But then we tend to prefer solid colour in our magnolia flowers, rather than the pale insides to petals and that is just a matter of taste.

Starwars is opening on our roadside boundary (our road verges are astonishingly beautiful at this time of the year). Starwars was bred by the late Os Blumhardt and we were enormously impressed with how good it looked in the UK and Europe. In fact we wished we could claim it as ours. But here it is best in its bud stage. While it flowers very well, the tree is a rather large grower and the flowers lack good form when fully open and the petals lack substance. It was far more a stand-out plant in Europe than it is here.

The also-rans can be as impressive as any named variety on their day, and if they aren’t they get chainsawed out PDQ. You can’t name everything and to get a magnolia on the market means there are many (very many) reject seedlings. We keep chuckling at Baby Tulip which is basically Black Tulip shrunk down in size to be a shrubby stellata type of bush covered in baby dark tulip flowers. It is not good enough to name and release, but it is a little cutie which is a contrast to the enormous flowers opening on the likes of Iolanthe, Atlas and Felix Jury. 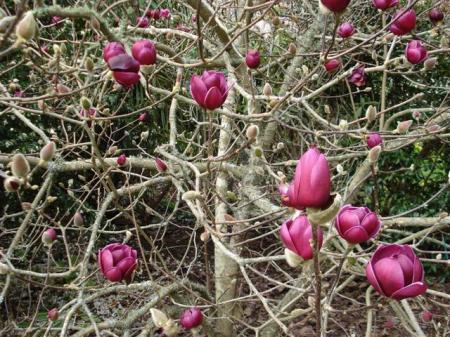 Referred to here as Baby Tulip