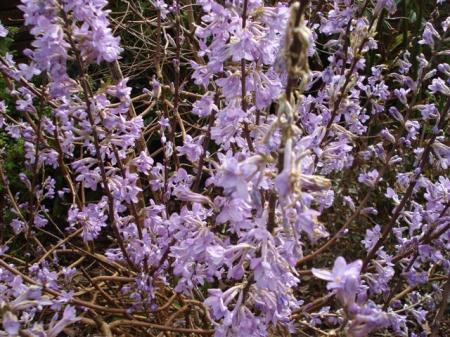 Beverley Nicholls (so-named before the feminisation of his Christian name) wrote in 1932: I had never “taken a cutting” before….

Do you not realize that the whole thing is miraculous? It is exactly as though you were to cut off your wife’s leg, stick it in the lawn, and be greeted on the following day by an entirely new woman, sprung from the leg, advancing across the lawn to meet you.

Writing as ones who have taken many hundreds of thousands of cuttings in our time, the magic of such activity has long ago escaped us but it would be safe to say that Mr Nicholls’ perspective is not one which has ever struck us before. However, Mark lives in hope. And a neighbour has given a new perspective on this. He put his hydrangea prunings through the mulcher, spread the mulch and now has hundreds of budding young hydrangeas in his garden. Micro propagation? Who needs to try cuttings when you have a mulcher?

We are not great on growing annuals (my expensive packet of white cosmos seed failed to germinate), but if you use annuals for bedding, you will be wanting to get plants in now for a display when the family turn up for Christmas… If you can be bothered deadheading annuals, it greatly extends their display time because their instinct is to flower, set seed to ensure their continued survival and then die. So delaying the seeding stage forces them to put up more flowers.

And a quote from Anon this week: God made rainy days so gardeners could get the housework done.

The sudden arrival of sunshine, heat and dry this week was slightly surprising after the severe cold of the previous week but we have been warning readers for some time about the need to get woody trees and shrubs into the ground as soon as possible. Make sure you soak plants in a bucket of water until the bubbles stop rising before planting, to ensure that the root ball is wet right through. If you are planting into full sun, you may need to acclimatise plants to the bright light by spending a few days having them in full sun for a couple of hours only. Many plants are grown in shady conditions (or under shade cloth) and can burn quickly in our bright sun.

If it is all too much for male readers, heed the advice of one T.H. Everett (whoever he may have been): A man should never plant a garden larger than his wife can take care of.