This ginkgo tree on the corner of Hall and Williams Streets in Cambridge gives lie to the 2.5 metre claim, though it is over 10 years of age. (Photo: Michael Jeans)

I am still chuckling. While I was preparing the recent column on ginkgo trees, a friend commented that she had one at the bottom of her garden and very pretty it is, too. Knowing she lives on a small town section, I replied that I hoped she had allowed plenty of room for it to grow. No, she assured me. She had looked it up and it only gets to 2.5 metres.

Raising my eyebrows, I sent her the Wikipedia link which declares ginkgo trees in the 20 to 35 metre range, with some specimens in China known to have reached 50 metres. I could feel her blench, even down the internet cable. It turns out that the internet site she drew her information from was a nursery selling the plants which stated 2.5 metres high in 10 years. Ginkgos are pretty slow growing but we would rate 2.5 metres as very conservative. We would expect that in 5 years here. And even in our nursery days, I do not think we would ever have declared a potentially huge tree as a suitable option for small, town gardens.

For as long as I can remember, the convention in this country has been to declare sizes on plant labels based on an average expectation of growth in 10 years. Problems come when the person writing the label may never even have seen the plant at 10 years of age, let alone 20, 30 or 40 years. We have always understood that the 10 year estimate came because that is the usual life expectancy of a plant in a New Zealand garden but I have no idea if that is true. The cynic in me says that it is more likely to be that customers would be frightened off purchases if they knew the real potential size of many trees and shrubs. Years ago, I wrote a series of columns on large, middle sized and small trees for gardens and a colleague chided me. I should not give mature sizes, she told me, because if customers knew those, they would never buy the plant.

As I mentioned recently in Garden Lore, it is easy enough to plant small specimens but if they outgrow their allotted space and become a problem, it can be very difficult and extremely expensive to get rid of them. It is also such a pity, particularly with trees. How much better is it to get the selection right from the start, so they can bravely grow on and reach their potential through the decades?

The problem often lies with impatient gardeners or home owners. Dear reader, Sod’s Law says that if a plant grows rapidly to the 3 metres you want, it is either very brittle and won’t last long, or it will continue growing to a much larger size, although the growth rate may slow. It is not going to reach the height you want and obligingly stay that size.

Experienced gardeners know that declared sizes are an inexact business at the best of times. A huge amount depends on conditions – sun, shade, wind, temperature, drainage, soil type and other variables. Geography plays a big part, both across the world and even within New Zealand. Plants grow more slowly and tend to stay more compact in colder climates.

I suggest you seek your advice from a number of different sources. Don’t accept a 10 year height as a final height and don’t expect that to be 100% accurate in your situation. It is only a guide and some guides are more accurate than others. We once found our magnificent Magnolia Iolanthe declared as a two metre high tree in a retail outlet.

If you want a tree that is going to be a focal point, consider spending more and buying an advanced grade specimen. You are paying to get a jump of several years in growth and that can make quite a difference in a small garden if you want instant impact. But keep to the slow growing varieties which will stay smaller. It may look as if you are getting more bangs for your buck if you buy a larger, fast growing one but really, you are just buying a vegetable time bomb.

Where space is limited, take potential width into account as well as height. A multi stemmed plant will generally be much wider than one with a single leader. Width can be a greater problem than height. 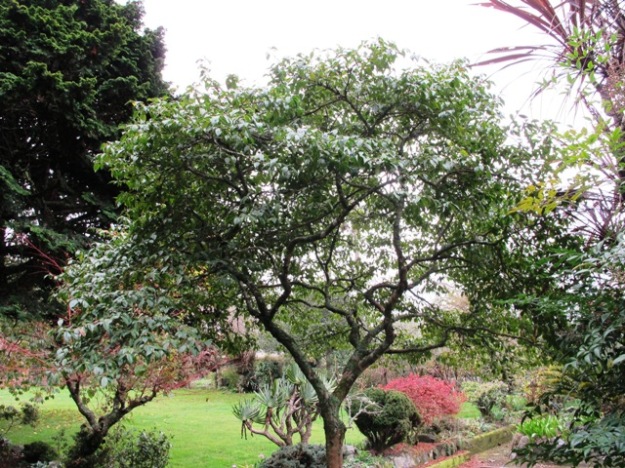 I would rate Camellia Tiny Star as close to perfection in a small tree – single trunked, gentle shade, evergreen, small foliage and plenty of tiny flowers, doesn’t get diseased, needs no maintenance and has reached its full potential. The downside is that it took a lot more than 5 years to get there.

The handsome Queen Palm (Syragus romanzoffiana) comes with a warning

While I am a big garden specialist, gardening across hectares, not square metres, I have spent enough of my life selling plants and dispensing advice to understand that trees are problematic on the tiny urban sections that have become the lot in life for most people. I still think trees can be an option in small gardens or courtyards where a bit of height and form can give stature to an otherwise closed in space.

Worry about width, not height. I call it the footprint – how much space it takes up. Many people think that Magnolia Leonard Messell is a good option for small gardens because it only grows about 3 metres high. True, we have a specimen that is coming up to 30 years old and it isn’t much more than that – but man alive, it must be getting on for 5 or 6 metres wide. That is a lot of space. In fact it is about the same footprint as our large specimen Magnolia Iolanthe and nobody in their right minds would plant that in a tiny garden.

By contrast, Magnolia Burgundy Star is very narrow and upright. After fifteen years, the original tree here is about 5 metres tall but it is not much more than a metre wide. This means it can give height and presence without casting deep shadows and taking up room. 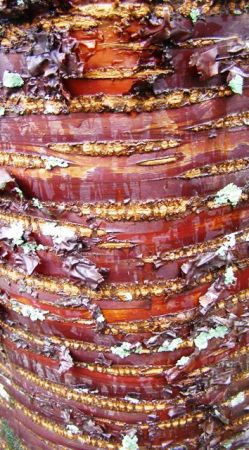 Flowering cherries tell a similar story. If you only look at the projected height so keep to lower growers like Prunus Shimidsu Zakura or sweet little weepers like Falling Snow, you are highly likely to get caught out by the width of the canopy over time and end up either brutally hacking into it or facing removal. Prunus serrula won’t give you the mass of fluffy flowers but it has wonderful bark and an obliging habit.

Palms, you may be wondering. Some upright, single trunked varieties like the bangalow (Archontophoenix cunninghamiana) or the more desirable Queen Palm (Syragus romanzoffiana) grow splendidly tall while taking minimal space. They are much favoured by landscapers for confined areas. However, they should come with a warning. They become too tall to groom so you have to let the spent fronds fall naturally and the sheath at the base of the frond is so heavy that it will break anything in its path, potentially ripping the spouting off your neighbour’s roof or causing panel damage to any vehicle in its path.

Conifers are often favoured – the narrow pencil cypress is the traditional look. Personally, I think they are a bit funereal and sombre, but others disagree. Conifers are not an area in which I have any expertise but you need to make sure that you have a variety which is not prone to red spider mite and be cautious if you think you will trim – many conifers don’t appreciate trimming and you can end up with unsightly bare patches.

Key pointers for choosing trees for small gardens:
1) Choose one that grows from a single trunk. Multi trunked and branched specimens take up a lot more room.
2) Keep to very narrow, upright growth. Shun anything with danger words like spreading, cascading, weeping or arching in the description. Think pillar-shaped (known as fastigiate).
3) Be cautious about a specimen you will have to prune regularly to keep under control. Anything over 2 metres high means you need a ladder and probably a pruning saw and loppers. It is better to plant the right sort of tree in the first place so that trimming requirements are minimal. By my definition, if it is under 3 metres, it is a shrub, not a tree.
4) Remember that it is not in the nature of trees to grow rapidly to the height you want and then to stop getting any taller. Trees that grow quickly will usually keep growing well beyond that. Small tree usually means slower grower. If it matters to you, pay the extra and buy an advanced grade specimen.

If you can find a tree with lovely bark or a seasonal flower display, then it is so much more interesting. Apropos of this, I came across a wonderful book recently by Waikato authors and tree-lovers, John and Bunny Mortimer. “Trees and their Bark” was published in 2003 but, being self published, I don’t think it received the attention it deserved. It is a delightful book, very readable with plenty of colour photos, by authors who know the topic inside out. It is still available and what is more, it is being remaindered at a ridiculously low price. I would not pass it by – it is worth having in the bookcase even if you are not in a position to plant trees. You will find the Mortimers listed in the Hamilton phone book or the white pages on line – there can only be one Bunny Mortimer.

Bunny’s pick for a small tree which can be grown on tiny sections is psuedocydonia which she feels ticks all the right boxes. You may have to get a copy of their book to find out more about it – it certainly has very striking bark as well as quince-like, fragrant fruit following on from japonica flowers. The only problem is finding it. You will probably have to grow it from seed.