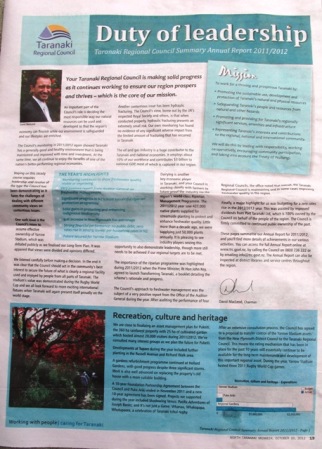 The Taranaki Regional Council’s summary of their annual report arrived as an inclusion in our free community newspaper. “Duty of Leadership”, it heads itself with a wonderful air of importance. The section that interested us was the one on the regional gardens which had around $2,100,000 spent on them in the last financial year.

Just to clarify, the regional gardens do not include the likes of Pukekura Park and King Edward Park which remain with District Councils. The regional gardens are a different kettle of fish entirely to the highly valued urban spaces that city parks and gardens provide. They are comprised of Tupare and Hollards (both former private gardens of a similar size and age to our own garden) and Pukeiti (formerly a private trust garden).

When Regional Council took over these gardens, in their wisdom they decided to give free entry. Except nothing is free. It just means the entry charges have been replaced by ratepayer funding despite the fact that many of the bona fide garden visitors are tourists. So ratepayers are paying for the free entry of people from beyond the region.

The same report this week claims close to 20,000 visitors to Pukeiti last year. We wonder how entries are counted for all the gardens, given that people just walk in. Without electronic counters, there is no way of knowing how many people actually visit and I can’t say I have noticed electronic counters on Tupare’s entrances. As far as we know, Council are claiming combined visitor numbers in the vicinity of 50,000 people. That sounds great – until you divide the $2mill and find it is costing ratepayers around $40 per head for every person that sets foot in those gardens.

We question how many of those 50,000 claimed attendances are actually to see the gardens. A fair proportion are there simply because the gardens are being used as a ratepayer subsidised venue. People who go to Farmers Markets, Fun Runs (there’s an oxymoron for you), an Antiques Fair and weddings are NOT garden visitors. The gardens are merely an incidental backdrop.

Our educated guess is that the number of bona fide garden visitors who go specifically to look at lovely gardens would be less than half that figure. There just aren’t that many garden visitors around. So even if they attract 25 000 genuine garden visitors, that ratepayer subsidy leaps to $80 for every man, woman and child who sets foot in the gate.

The decision to waive all entry fees and place the full costs of these gardens on the ratepayer is one which immediately put Regional Council in direct competition with the private sector. I am still stunned at the naivety of one councillor who said to me recently, “Have you had no positive spin-off?” Well no, because Council set the value of a garden visit at a big fat zero. We see garden tours come in to the province whose itineraries include all or most of the free Council gardens and one or two small town gardens. The much vaunted cruise ship last summer is only one case in point. Of course tour participants pay an all-inclusive price so any extra profit from concentrating on the free gardens goes straight into the pockets of the tour operators.

I quote an email received by friends with a large private garden: “We plan to bring a group down to New Plymouth for 4days early Nov.& have had your gardens recommended to visit. Even though we have brought other groups to New Plymouth we have not come out to Oakura. We are looking at coming to your place either the 5th or 6th Nov. depending on the weather. Are your gardens open all year?, & is it a free council one?”

In fact Council have made it much harder for the private gardens which suddenly look very expensive at a $10 per adult gate charge. But to say so publicly (as I am here), is to open oneself to accusations of self interest and sour grapes. Of course we are more interested in our own garden. What couldn’t we do with half a million dollars of public money a year? In fact the annual garden festival (the Powerco Taranaki Garden Spectacular) is the event that makes opening a private garden viable here, not the provision of very expensive regional gardens with free entry.