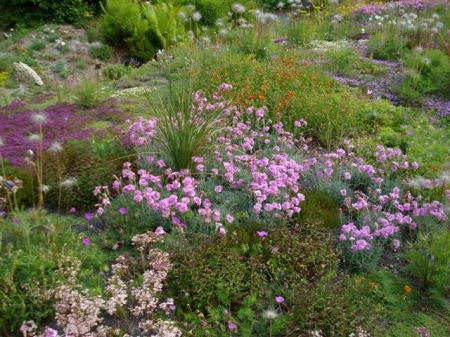 Magic at The Garden House in Devon

I wrote in my last column about redoing the rockery plantings here – a task finally completed after a good three weeks. When I say completed, I could just keep going on the margins and expanding onwards and outwards but other priorities call at this stage. In that column, I mentioned what we call the carpet garden as an alternative way to feature little treasures without the structure of individual pockets, raised beds and, in our case, several truck-loads of rocks.

I don’t know if this genre of gardening has a different name but if you think of an oversized Persian rug, or maybe a patchwork quilt of random design created from tiny treasures, you may get the picture. This is not in any way to be confused with its vulgar and strident cousin – the traffic island geometric bedding plant displays composed of annuals which have a debt to the Edwardians. The French have a long history of doing these bedding plant displays with more ooh la la francais panache but they are still combinations of bedding plants. If floral clocks composed of African marigolds, blue lobelia, red salvias and pink bedding begonias are your thing, then so be it but they leave me cold.

Altogether more refined is the plantsmanship in achieving mats of dwarf perennials. The finest example of this that we have seen is at The Garden House in Devon, on the edge of Dartmoor. Admittedly we were instantly won over by The Garden House on arrival because the very first significant plant we saw, in pride of place as one enters, was none other than Mark’s magnolia named for his father, Magnolia Felix Jury. It was an auspicious start for antipodean visitors and we felt a rosy glow of pride which I think was entirely justifiable. Leaving that aside, what is designated The Quarry Garden caught our attention. In this case it is an undulating carpet, planted through the site of a small quarry with some contour to the land. On a summer’s day in June, it was an entrancing patchwork quilt. We are talking plants such as the prostrate thymes, alpine phlox, spreading euphorbias, cistus and roscoea with the occasional vertical exclamation mark from echiums (which are more prized in UK gardens than here). I didn’t take plant notes, unfortunately, but I am pretty sure there were dwarf bulbs in there too. Little treasures again, featured in a garden style which allows them to flourish and to have their place. It is a style of alpine gardening, as is the traditional rockery, so it needs open conditions and to be kept free of bullying thugs of plants.

The other example of carpet gardens that we saw was at Sissinghurst and these, alas, were not memorable. Best guess is that they were designed to feature the prostrate thymes. As dead flat concrete rectangles surrounded by flat paving and lawn, they had all the panache and style of children’s sandpits given a new use. At a time of year when they should have been brimful of interlocking mats of ground cover, they were instead sparse and somewhat barren. We were underwhelmed.

Naturally I wanted to come home and try a carpet garden in the style of the Quarry Garden we saw in Devon. I even mentally located it in a sunny, open position in our new North Garden. But ever the pragmatist, Mark pointed out that this style is extremely high maintenance. Not only is plant selection critical, when a garden is filled with ground hugging miniature plants, weed control is of the essence. You can’t be out with the push hoe or glyphosate in this type of garden. Nor can you rely on compost mulch to suppress unwanted germination. Upon reflection, I had to agree that he is right. It is a place which requires you to pick your way through gently, ever useful wonder weeder in one hand and bucket in the other, taking care where you place your feet. Readers who have tried planting chamomile or thyme lawns will know what I mean. We have one stretch where we have a carpet of prostrate thyme softening the edges between concrete pathway and our driveway. It always seems remarkable to me that the thyme will grow on the concrete path with a mere few millimetres of accumulated dirt to set roots. But I work on that thyme carpet constantly to prevent weeds from getting established. The nasty little bitter cress can creep in, as can a dwarf poa (grass), summer grass and the creeping yellow oxalis. If I didn’t keep onto it, it would not take long to turn into a carpet of thyme and weeds.

Constant maintenance is needed on our thyme edging. The yellow flowers are zephyranthes, known as the rain lily from central America

So my advice on the carpet garden concept is, first and foremost, don’t even think about it unless you are a very precise and fastidious gardener who is prepared for eternal vigilance and intervention. This is not for laissez faire gardeners at all. Not only that, but you have to constantly remove fallen leaves and debris. Immaculate maintenance is a critical part of keeping it looking good. Turn your back on it all for a season and you will likely have a scruffy, weedy mess. At this stage, I have shelved my ideas for trying one. Maybe it could be a little project in retirement.

However, should you wish to try one, think ground hugging (prostrate) plants and miniatures along with dwarf bulbs. Little and low is the key. We are not alpine here so you will probably fare best with some of the thymes, baby campanulas, trailing lobelia for fillers, the true mini irises, small growing sysirinchium (there is a very nice little blue flowered one called Devon Skies that we bought from a local garden centre), dianthus, our native helichrysum which we have under the cultivar name of Silver Cushion (may be a selection of H. bellidioides) and the like. You could use verbascums for vertical accents and there are assorted bulbs which will grow tall but without large spreading foliage to smother surrounding plants. Albuca juncifolia fills this role well, in our experience. The long and the short of it is that you are going to have to be a bit of a plant collector as well as a careful gardener. Add in excellent drainage, open conditions and the traditional mulch of coarse gravel. There is no mystery to the carpet garden – just attention to detail if it is to achieve the magic status we saw at The Garden House.