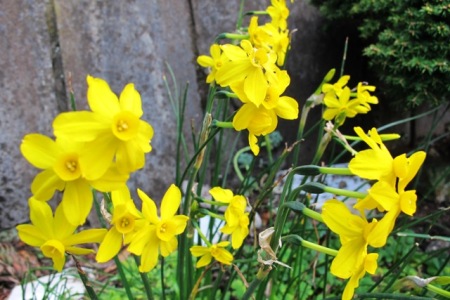 Dainty but with a strong perfume – N. jonquilla

We have been taking a closer look at the narcissi this spring, picking out the ones which flower for longer periods and, latterly, the later flowering varieties. It would be good to have more flowering near the bluebells which are in full flight now. Most daffodils that you see around and buy as bulbs are hybrids. We are back to the original species this week with two which are flowering after most of the others have been, done and gone.

First up is the daintiest, tiniest and most fragrant jonquil species imaginable. It happens to be known as Narcissus jonquilla and is native to Spain and Portugal where it can be found in damp places. There can be up to five flowers per stem, each not much more than 2cm across. 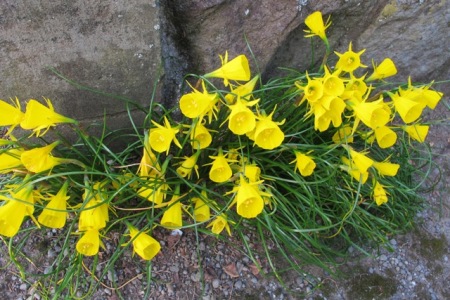 Narcissus bulbocodium – one of the last to flower here

Then there is Narcissus bulbocodium, also known as the hoop petticoat daffodil. It has no scent but if you have a good form of it, it flowers in abundance. It looks as if it only has the corona, which is what the trumpet is called, but it actually has a little frill of six tiny pointed petals making a star near its base. It too comes from the Iberian Peninsula but can be found as far south as Northern Africa. Despite that, it is hardy and sufficiently strong growing to naturalise. Both species have fine, grassy foliage.