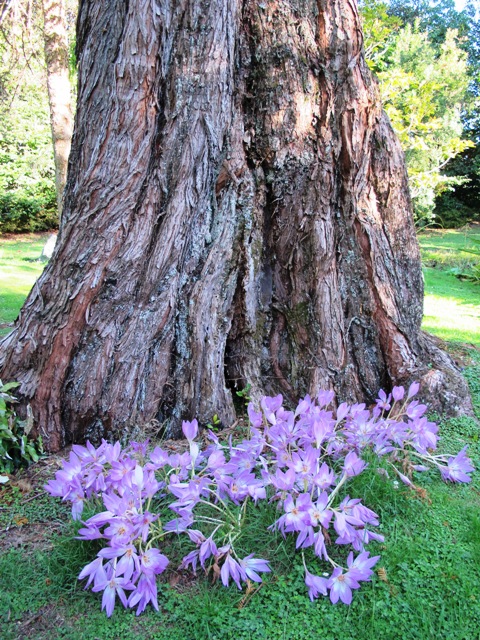 Colchicums in the park

The demise of two of our grand old pine trees a few weeks ago has necessitated a fairly large clean up. They were about 140 years old and had been on a major lean for much of that time. Clearly they passed the point of balance. But, as happens in gardens, their collapse also opened up an opportunity. Suddenly there was a nice little area which had been dense shade and more or less left to its own devices but was now light, open and clearly of potential.

“Bulbs,” I thought, “I shall plant it in a succession of bulbs to take it through the seasons.” I started with what was already there – a congested but large clump of snowdrops, a few cyclamen and some valiant pleione orchids which were battling on despite choking ground cover plants. Then I raided the nursery where we still had quite a few pots and trays of suitable bulbs, particularly dwarf narcissi of various types. By this point, I was already committed to using minis and dwarf growers which would co-exist and not choke out their growing companions.

So how many bulbs are needed to fill an area?

As I continue to raid suitable bulbs from wherever I could find them, I started to do the maths. We are not talking a large area here. It is maybe 10 square metres (5x 2) at the most. Do you have any idea of how many dwarf and mini bulbs are needed to fill that space? Allowing maybe 5 bulbs per 10cm square, that adds up to a massive …. 5000! Okay, so the cyclamen are not planted at that density, but many of the others are.

Had I chosen to start with larger bulbs of stronger growing varieties – full sized daffodils, bluebells, tulips, colchicums and the like – I could have planted them at maybe 10 cm spacings so would have only needed about 1000 bulbs. It is still a lot.

The lesson is that if you are besotted by bulbs, as we are, it helps to learn how to look after them so that you can increase the supply for other plantings. Having depleted the nursery of spare bulbs that are suitable for this situation, I am now taking apart beds in the rockery to thin the bulbs there and get the surplus for my new area. So far, as well as the types already mentioned, I have added rhodohypoxis, blue brodiaeas, various different lachenalias and crocus. I am aiming for mix and match in the hope that there will be something seasonal and dainty flowering in that particular section at all times of the year. It will take some tweaking over time to get it right.

Belladonnas beneath the gum tree at our entrance

I have a mix and match of large and some invasive bulbs beneath a huge old gum tree at our entrance. Invasive bulbs are easily contained there and there is room for sometimes scruffy performers like the belladonnas to put on a good show.

Bluebells to the left and common old Lachenalia aloides in front

Elsewhere, we have tended to keep our bulb plantings separated by variety. This may be our nursery background – keeping the option open to start selling bulbs again if need be. But a big show of a single variety can be striking. We sometimes use the root zone at the base of large, specimen trees, usually on the sunny side because most bulbs enjoy light but are adapted to surviving quite harsh conditions. This gets them out of the way of the lawnmower. 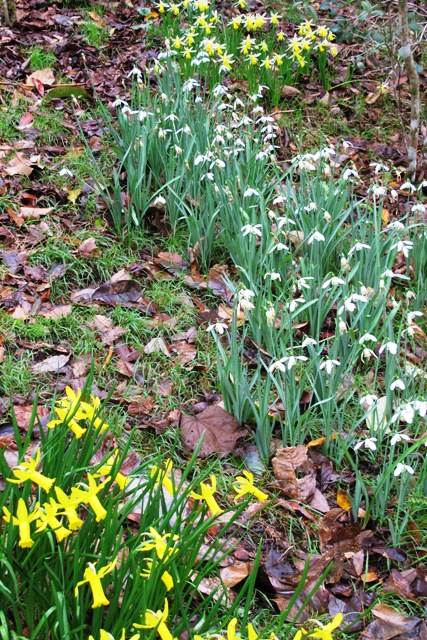 Drifts of bulbs are harder to manage here

But really what we covet most are drifts of bulbs – informal, randomly organised rivers of seasonal colour flowing through. In harsher climates where the grass stops growing in winter (too cold) and summer (too dry), it is possible to do it in grass. But not here. Without significant management, the strong growing grasses overwhelm the bulbs and need mowing before the foliage has had a chance to carry out its function of replenishing the bulb.

It is easier to work with bulbs which shed their foliage quickly. There are big differences in how long different types keep their leaves – anything from 4 to 6 weeks up to 11 months. Fortunately the pretty snowdrops (galanthus) are light on foliage, because what we really want over the next decade is to develop proper drifts of snowdrops. Not a few hundred. Thousands. They will be a fleeting wonder lasting a mere week or two each year. But it is the sheer frivolity of self indulgence that will spur on the snowdrop dream. At least we know which ones perform well in our climate – without snow or much winter chill – and we will just gently work on it by continually dividing and spreading the existing clumps. I am guessing the one clump of Galanthus viridapicis in my new little bulb garden yielded upwards of 300 bulbs. That is a good return.