“Nature is the gardener’s opponent. The gardener who pretends he is in love with her, has to destroy her climaxes of vegetation and make…an alliance with her which she will be the first to break without warning, in the most treasonable way she can. She sneaks in, she inserts her weeds, her couch-grass, her ground elder, her plantain, her greenfly and her slugs behind his back. The bitch.” 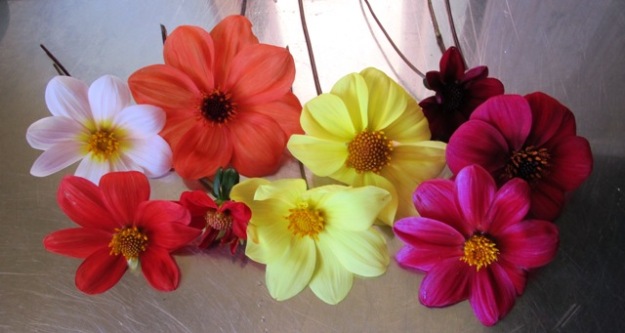 These cheerful single dahlia blooms all came from open pollinated seed gathered from a simple yellow variety. While dahlias are easy to increase by lifting and dividing the tubers when dormant in winter, any new plants raised that way will be identical to the original plant. Raising seed gives variation and in some situations, that variation is interesting to have. We didn’t start with many dahlias here so we were surprised at the range of colour from near white, through yellow, orange, bright pink to deep red. Some of the seedlings flowered in the first year from sowing and all flowered by the second summer so it is an economical way of building up numbers for planting larger areas.

“Open pollinated seed” just means that we left the bees to pollinate the flowers and gathered the seed when it was ripe. It is what happens every day in the natural environment. It is not likely that we will ever get a brilliant seedling through – something stand-out, different and worth commercialising, but that is not what we are after. Nor will we get some of the remarkable forms that are prized by dahlia aficionados – collerette, pompom, cactus, anemone and others. The vast majority of seedlings will be singles but the percentage of doubles will increase if you are collecting the seed from a double parent. We just wanted them as fillers for the summer garden and we personally prefer the single blooms which also feed the bees and the butterflies.