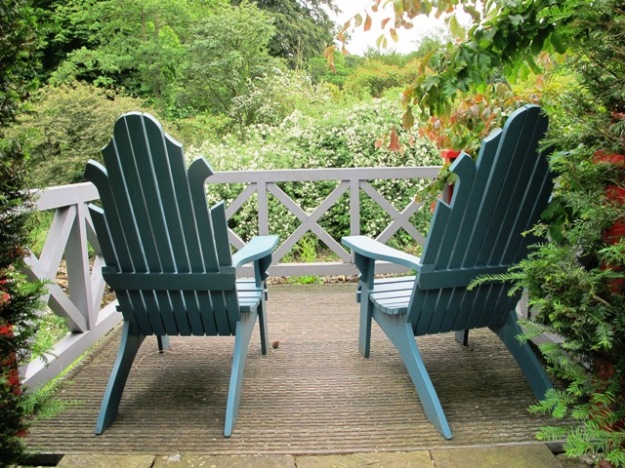 It took my American editor to clarify once and for all that these are not Cape Cod chairs, as often claimed but Adirondack chairs. You have been told. These specimens are somewhat more stylish than many examples, achieved by the graceful curve of the back legs and some relatively simple shaping of the back slats. Small detail can make a significant difference. Sadly, it did not make these chairs any more comfortable. I tried one and can report that anybody under two metres in height would find it most uncomfortable and there is some doubt whether those over two metres would think any differently. 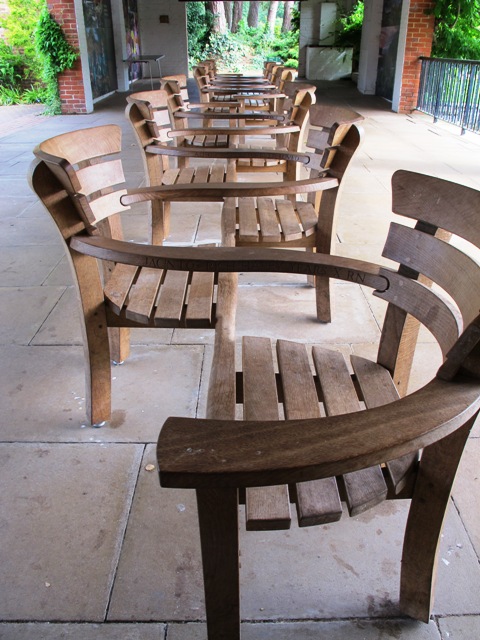 I am sure there is a technical term for this seating design which reminds me of the dosey-doe move in American square dancing. I photographed this at Wisley, the RHS garden, where Mark and I mimicked a couple we once heard elsewhere. “ ’ere love, wot canya see from your side?” “”Oh a luverly pitcher with them waterlilies. Wot abaht you?”. When I then saw a similar seating arrangement in a French bed and breakfast, I realised it must have a tradition. Curiously, this seating configuration can actually give some sense of intimacy to sitting with your one companion in a public setting.

Stone, concrete or brick seating can be a problem, especially in a cool climate with high rainfall or when located in the shade. While the softening ivy, moss and seeding ground cover makes the seat meld visually with its surroundings, it also makes it damp to the derriere as well as being cold and unforgivingly hard. I speak from experience here with our own stone seating arrangements. Keep them in full sun and free of moss.

Seating in the round – a particularly elegant example I saw in a private garden, but I still think this is more for appearance than congeniality. I once read an explanation that humans do not like to sit with their backs to strangers because of potential threat. Certainly this type of seating is more likely to be used for short term rest only and not in a companionable social setting. Sometimes these seats are built around existing trees but they seem to smack of the institutional garden more than the private, domestic living space. 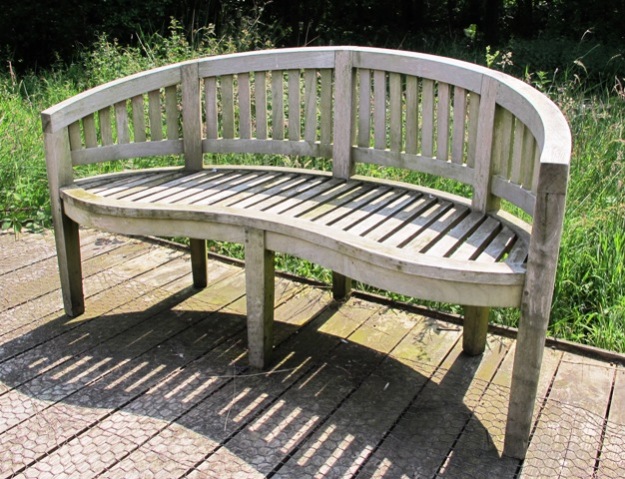 There are many variations to the simple bench from the most basic example that is sold cheaply in our hardware stores to somewhat more elegant styling such as this. It is the curve of both the seat and the back which make this example more aesthetically appealing – and no doubt correspondingly more expensive. Being English, this is probably constructed from oak. The cheap benches in New Zealand are often Indonesian hardwoods which are not overly durable if left outdoors through our winters. 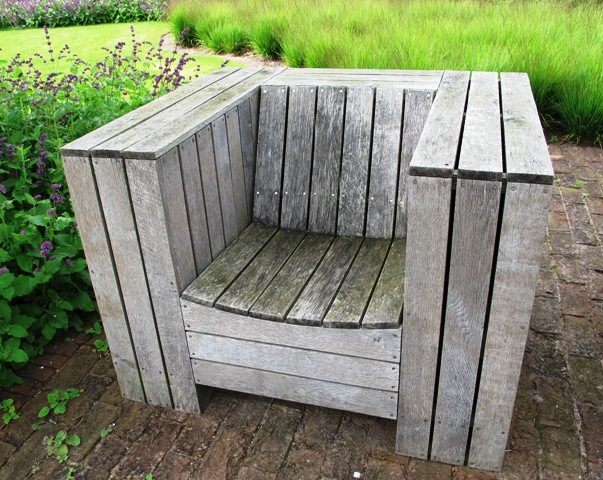 I offer this as an example of a seat which looks stylish while coming up short on practicality. It is very close to the ground which is fine until you hit about 50. The curved seat looks comfortable but consider how hemmed in your arms would feel in this solid set up. If you are going to have the arms and back at the same height, then make the back shorter, not the arms higher. The use of wide armrests on outdoor seating – also seen in the Adriondack chairs – is a handy device for accommodating the coffee cup or wine glass.