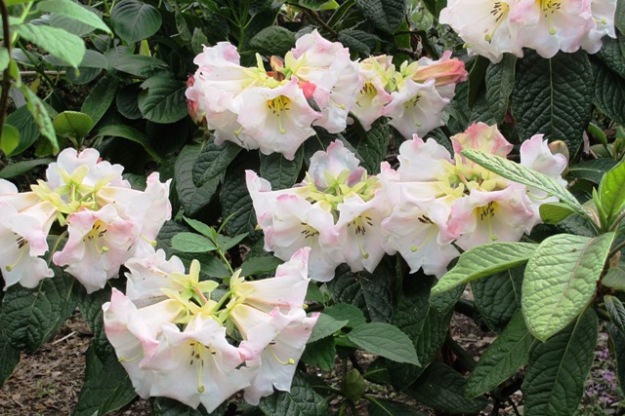 The glory of the sino nuttallii rhododendrons

Rhododendons may no longer be the elite fashion item they were for so many decades, but we still love them.

When we started in the plant business back in the early 80s, rhododendrons were a hot ticket item. We were but one of several rhododendron nurseries in Taranaki and to survive, we needed to find our own niche. To this end, we grew a different range, specialising in varieties that would perform well in warmer climates – like Auckland. After all, even back then, one in four New Zealanders lived in greater Auckland and we figured that if we were going to sell them rhododendrons, we might as well sell them ones that would do better for them. Mark’s father just happened to have done some breeding to find varieties that were more resistant to thrips, didn’t get that burned and crispy edging to their foliage and were predominantly fragrant as well as floriferous. It gave us a good place to start.

Nowadays there are no specialist rhododendron growers in Taranaki at all and the demand has melted away. I no longer have to try and convince people that not all rhododendrons have a big full truss in the shape of a ball but many have loose trumpets in curtains of bloom instead.

Rhododendrons are one of the backbones of our garden and we wouldn’t have it any other way. While they have a relatively short season in full bloom, the anticipation of fattening buds stretches out the weeks with the promise of delights to come. They are as fine a shrub as any we grow here and a great deal more spectacular than most.

The nuttalliis. Oh the nuttalliis. Peak nuttallii season doesn’t start until closer to the end of the month, taking us into November but some varieties have already done their dash for this year. If we could grow only one type of rhododendron, we’d choose a nuttallii and even more specifically, the sino nuttallii from China. You can keep your big red rhodos (most people’s favourite pick). We love the fragrant, long, white trumpets which look as if they are made from waxed fabric, the lovely peeling bark and the heavy textured foliage. These are rarely offered commercially now so grab one if you ever find it for sale.

It is, by the way, nasty little leaf-sucking thrips that turn foliage silver and no, you can never turn those silver leaves green again. If you look at the underside of the leaf, you can see dark thread-like marks – these are the critters that do the damage. All you can do is to try and prevent the new season’s growth from getting similarly infested. We are not at all keen on spraying insecticide these days and you need a systemic insecticide that the plant absorbs into its system to get a thorough kill. If you must go down this path, spray in mid November, early January and late February for maximum effect. Others praise Neem oil instead but we haven’t tried it.

We favour choosing more thrip-resistant varieties, keeping them growing strongly and opening up around them to let more air and light in. Thrips prefer shade and shelter. Unless it is really
special, if it is badly thrip-prone, we replace it with a better variety. Not every plant is precious.

In the longer term, plants come and go in the fashion stakes. Goodness, even red hot pokers are having a resurgence of popularity. We don’t worry about the fashion status of the rhododendron and Mark continues hybridising for better performing cultivars. If there is no commercial market for the results, it doesn’t matter. We will continue to enjoy them in our own garden.

First published in the New Zealand Gardener and reprinted here with their permission.