When I first spotted this pretty, young tree in a local garden last spring, I could not identify it but it sure was a charming sight. In Canberra a couple of weeks ago, there were SO MANY of these trees in bloom that I felt I had to track down a name. It is a flowering crabapple, a malus. The nurseries that supply Canberra are clearly making a killing on producing this cultivar (along with the pretty dogwoods). It is being used widely as a street tree on suburban road verges, it was strongly represented in the gardens at Parliament House that we visited and was featured in many, many (many) gardens.

It is a pretty blossom tree though it does flower as its fresh foliage has broken dormancy, so the display is not on bare branches. Crab apples fit a similar niche to flowering cherries (prunus), though many varieties will flower a little later. Unfortunately, with ‘Plena’, you don’t get the bonus of coloured crab apples later in the season, although it can be used as a pollinator for the fruiting varieties.

Malus ioensis ‘Plena’ , not a prunus as I initially assumed

I have not looked closely at the plants in New Zealand to see if they are cutting grown or grafted. The Canberra plants were grafted, usually onto a rootstock that had an attractive, smooth pale grey bark. The problem with the plants in the Parliament House gardens (no photos allowed so I can’t show you), is that the lower grey bark of the root stock for the first metre or so was not particularly compatible with the graft so the union – where the grafted variety meets the rootstock – was already a bit lumpy and not attractive. They were not as bad as the linden shown here, but neither were the plants mature so they may well get worse. If you like your trees to last the distance over many years, just be cautious about buying plants that have been grafted as standards well above ground level. The closer the graft is to the ground, the less obvious any incompatibility will be.

It is a very pretty tree and one I expect we will see become as popular in this country as in Canberra. 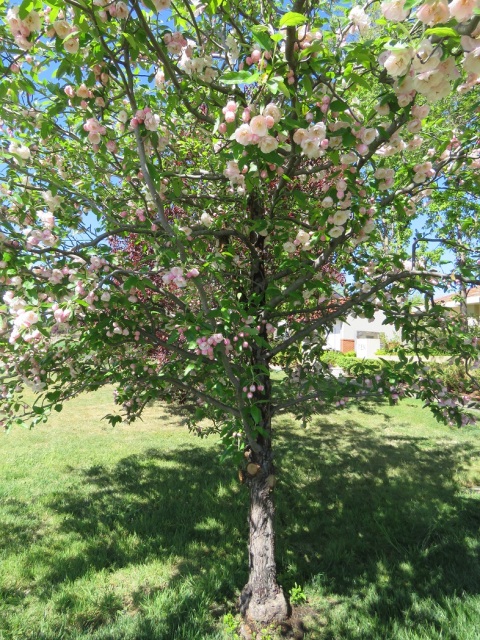