There are not many plants that I actively dislike but the dwarf, coloured nandina is one. You can tell I do not care for it because I gave no loving attention at all to taking this photograph of a plant on a random street frontage in town. Yet this plant is everywhere. One of those bullet-proof, easy-care plants which is alleged to have ‘year-round interest’ with its coloured foliage so a perfect fit for non gardeners who merely want plants to act as low or no-maintenance soft furnishings in the garden.

Mark was as surprised as I was when I told him I had looked it up and there is only one species of nandina and that this boring little coloured mound which is rarely above knee height is the same species as the far more graceful and attractive Nandina domestica ‘Richmond’ that we grow. I can only assume that the common name of heavenly bamboo was initially applied to the more graceful, taller type of selections like ‘Richmond’. I guess, at a pinch, one could claim it has a bamboo look to it, though probably only to those who have never actually looked at the real thing. It is actually a member of the beriberidaceae family (think berberis). Apparently nandinas only berry in warmer climates and ‘Richmond’ is self-fertile so will berry without needing the pollinator that most others do. It is worth growing – easy, reliable and low maintenance yet with a grace and elegance to it, as well as seasonal interest with its berries. 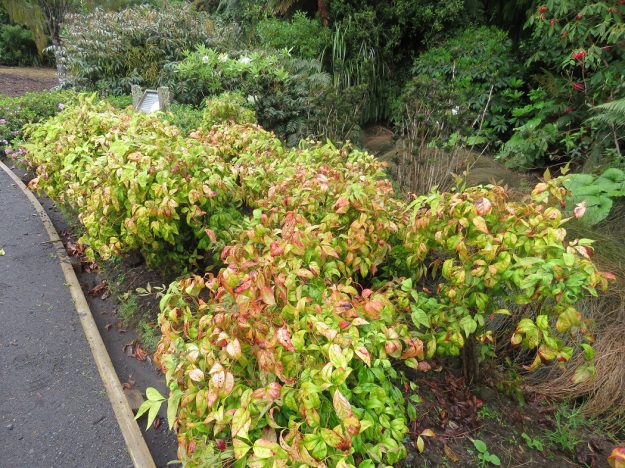 The institutional look of utilitarianism

The dwarf forms lack all of these more desirable attributes except utilitarianism. The more you have, the more utilitarian your garden will look. I have photos of a private garden which has planted a score or more of them but it is too easy to identify the place from my photos and I do not want to upset the owners.  I can, however, offer you this photo of it being used in a public garden. It will not look much different in your garden at home. But it will be easy-care.

The dwarf forms seem to be available under a whole bunch of different cultivar names with some variation in leaf tones and berrying capacity. You can tell it will be a dwarf form by the descriptions of it as clumping, compact or dwarf with projected heights of 60 to 75cm. The red berries, if you get a berrying variety, will never be as showy on a 60cm mound with coloured leaves as they are on their taller sibling with its green leaves and the panicles of berries displayed prominently at eye level or above.

In the interests of disclosure, I will admit that we have one of the dwarf nandina in our garden, though not in a prominent position. Its days are numbered. Probably in single digits since I worked out how much I actively dislike it.

16 thoughts on “Plant Collector: the good and the bad of nandina”