The story of a New Zealand Christmas is inextricably bound up with the annual blooming of our native pohutukawa trees – Metrosideros excelsa. Truth be told, they only occur naturally as far south as northern Taranaki where we live and Gisborne across the island, (but not in the middle where it is too cold for them). Fortunately, most of the country is happy to go with descriptor of the New Zealand Christmas tree.

The Legacy of the the Lazy Nurseryman. The flowers are more brown than red.

But not all pohutukawa are born equal. No sirree. As we drove to town a few days ago, Mark looked at the trees planted by a local farmer along the roadside and dubbed them the legacy of a lazy nurseryman. They were planted well and are growing well and the farmer has taken care of them, fencing them off from grazing stock and keeping them an attractive shape. The pity is that he (or she) was supplied with plants that flower more brown than red so they will never mature to the glory that could have been. The problem, Mark explains, is that some nurserymen are just too careless about where they gather seed and fail to select the best performing plants with the showiest colour.

Our local town of Waitara is like Pohutukawa Central – there are many (many, many) trees planted, at least in part because there aren’t a lot of options for trees that will grow in windy, exposed coastal conditions and be fairly bullet-proof (vandal-proof, really) as unprotected street trees. But not all those trees flower well. Some don’t flower at all, really, and some that do are patchy with undistinguished colours. It is called seedling variation. When you come across a tree that is covered in bloom and a clear red in colour, it just leaps out at you, visually speaking.

I felt I was channelling my late parents-in-law as I drove around Waitara yesterday, looking at different trees. Back in the late 1970s and early 1980s, they systematically evaluated many of the trees around the river bank and surrounding streets, noting which were the best bloomers year after year and the best colours. At least three went on to be introduced commercially by Duncan and Davies Nursery. Somewhere in the family archives, I have some of Mark’s mother’s diary notes of those observations. They read something along the lines of: “Good bright red to the left of Mrs Markham’s house, 18 xxxxx Street”.  I am not sure if they also measured the length of the flowering season though they did record which ones flowered well every year, rather than every second or random years.  There are so many handsome trees in the wider area here that it had not really occurred to me until very recently that the flowering season is but short – probably only ten days at peak. Ephemeral, I saw it described as recently. It is just that those ten days are in the lead-up to Christmas and a good tree is a show-stopper for that time. Not unlike the Japanese cherries, when you think about it. They too have a very brief peak season but an entire festival celebration has evolved around those days. 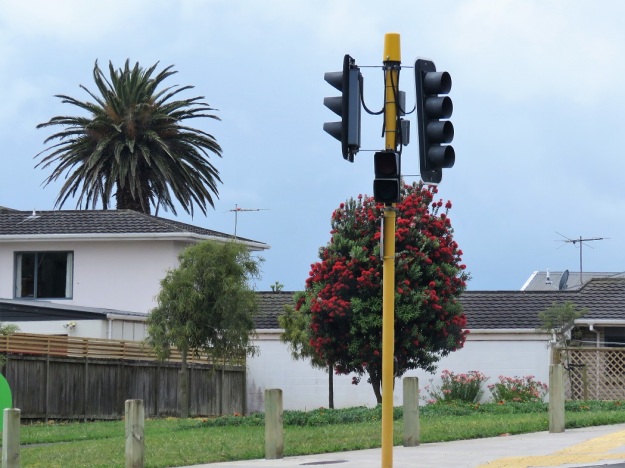 I took this photo out of the car window (Mark was driving) as we went through a busy intersection in New Plymouth. It is clearly a named selection and superior from the start

The lesson to all this is that if you are only going to buy one or a few pohutukawa, buy named varieties which will have been produced by cuttings so they will be identical to the parent. If you are going to buy quite a few, at least select a reputable nursery who can tell you what the seed source was. If they can’t tell you that, forget it. If you are going to raise your own from seed, start with the best flowering specimens. Pohutukawa don’t grow true from seed so you will get seedling variation in the offspring but if you start with the best parent, the proportion of good offspring you raise will be much higher.

If you are wondering about raising your own plants from cuttings, it isn’t at all easy to get them to root unless you start with juvenile material (from a young tree or one that has been kept pruned hard, not big old established specimens with lots of woody growth). If you are going to go down the route of raising your own material, get out and record now which trees have flowered all over the plant and in a good, clear red shade. It takes a commitment of time and effort to raise your own plants and it just seems a waste if you end up with murky, brownish flowers or worse, one that doesn’t flower at all.

Personally, we are not convinced by the Kermadec pohutukawa (Metrosideros kermadecensis). It is a different species and rather smaller growing and often sold as more desirable because of that compact habit and its extended flowering season. Yes, you will get flowers over months, but you only get a few flowers at any one time and the whole thing about the pohutukawa is that beautiful mass of bloom around Christmas. Ditto the yellow forms of M. excelsa. Yes, they are really pretty and they have an interesting botanical history of their own but they won’t give you the wham-bang mass display of the New Zealand Christmas tree.

Just choose good ones if you plan to plant any.