Unbelievable. The second most read entry on this website is the piece on plagiarism I wrote last May which resulted in a lightning quick withdrawal from sale of Penguin’s publication: The Tui New Zealand Fruit Garden by Sally Cameron. Even now, that article attracts several hits most days. But Penguin clearly think the public will have forgotten. Exactly a year later, they will be releasing the new version of the book. To all intents and purposes it looks the same, but apparently this new edition has been written “in conjunction with a panel of industry experts”.  Well that is a relief and shows that some notice may have been taken of the earlier shortcomings, but what on earth made them think that the author, Sally Cameron, has any credibility left?

Are we to see this new edition released with all the usual hype and hollow accolades for the author? I fear it is likely, given the early blurb on Penguin’s website: The Tui NZ Fruit Garden [PDF] It is a good topic, Penguin, and you produce good looking books. You just needed a credible author and a new look. Will you be offering to replace the withdrawn copy with the new edition for those who were unfortunate to waste their money on the first attempt? 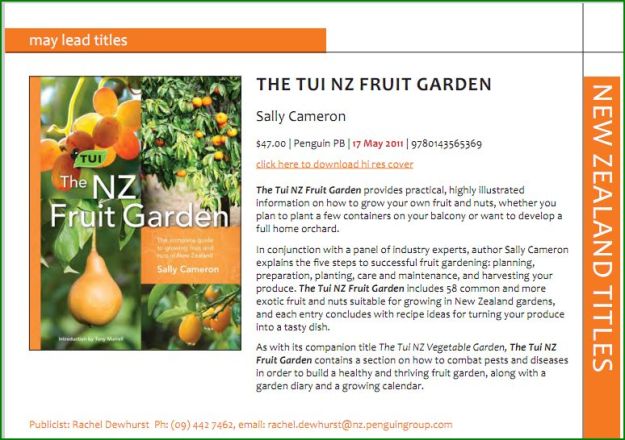 The latest update on this article is The Sequel, a second coming for Tui NZ Fruit Garden

Sally Cameron is attempting to punch well above her weight in her book The NZ Fruit Garden. Her main experience seems to be in food writing and cooking and she runs a catering company in Auckland. Her gardening credentials are very limited and it shows in this Penguin publication sponsored by the Tui garden products company.

There is nothing wrong with using a researcher to pull together a comprehensive book as long as the editor/publisher ring-fences her with an expert panel to review the information. There is no evidence that this was done. Alas, being a keen home gardener on the North Shore is not sufficient. There are too many errors and in places the information is simply not adequate. Even worse, there are sufficient instances of unacknowledged quotes to make me breathe the dreaded word: plagiarism.

All those multitudes of fruit trees and plants sold in the past two years need attention. Clearly the time is right for a manual. And a manual is what this book is. To be fair, it is a well-presented book designed to be used often – good-quality paper, opens flat and even has a thoughtful heavy-duty plastic cover. The majority of the book is an alphabetical listing of 58 fruits and nuts, each giving some information on the origin, recommended varieties and the where, when and how of growing them. In addition to that, the first 50 or so pages give a great deal of generic information on propagation, planting and care. At the end of the book, there is a section on pests and diseases and a monthly diary for maintenance and harvest tasks. From almonds and apples to walnuts, most of the crops you will ever want to try growing are included – along with quite a few that you cannot grow, though you are not likely to learn that from this book. Tui’s sponsorship is generally unobtrusive. Superficially, the book looks really helpful and the design is good. Sadly, looks can deceive.

I went to double-check some of the information on apricots, particularly the claim that ‘‘many people think they are subtropical’’. In New Zealand, we all know the best apricots come from Central Otago and nobody ever claims that area to be subtropical. According to Cameron, apricot trees are considered subtropical, which means they can tolerate temperatures from 0 degrees Celsius to over 35 degrees Celsius and still remain healthy. Puhlease. That is not a definition of a subtropical plant. Elsewhere in the book, she recommends them as a suitable crop for Northland. But worse was when I found the Wikipedia entry and thought it seemed familiar. It was. I had just read it in the book.

The guava entry is a worry. Actually, it’s even more than a worry when I compared it to easily tracked online sources, to which it owes a rather large debt. Cameron: The guava succumbs to frost in any area – it is a tropical fruit after all. Even if summers are too cool, the tree will die back.

There’s a slight problem here. She is writing about the large growing tropical guava, Psidium guajava, which you may have tried eating in Asia (I found it disappointing). But what we can and do grow here – and which has similar hardiness to a lemon – is the strawberry guava, Psidium littorale. The recommended varieties and some of the photos in the Cameron book are of P. littorale, but they are included under the tropical guajava and there is no indication that Cameron knows the difference. In our 30 years of experience with growing littorale, it does not suffer from any of the hideous pests and diseases she lists at length. Added to that is the propagation information, which is bizarre. Why even mention air-layering when it is not recommended and is so rarely done in this country as to be virtually unknown? The reason: because it appears to be cut and pasted from an easily traced Californian website that was all about guajava. Had Cameron known her material, she would have explained that littorale is commonly raised from seed in this country.

Cranberries: what is grown widely and successfully in New Zealand and indeed is now branded the New Zealand cranberry is, in fact, Myrtus ugni. Most New Zealanders wouldn’t even know that it is not the true cranberry and that the fruit used for Ocean Spray cranberry juice and dried or frozen cranberries is, in fact, a vaccinium.We have never heard of proper cranberries being grown in this country, though presumably you could grow them in Southland, because they need cold temperatures and may be happy in the southern peat bogs. Presumably the author didn’t know about cranberries, because the book doesn’t even mention Myrtus ugni, which you can buy from pretty well every garden centre here, but instead is all about vacciniums. That is the problem with using overseas references without local knowledge. Even then the information given is contradictory. In one sentence, vaccinium is recommended for growing around ponds and other soggy areas. In another, it is recommended that you plant it in the coldest, wettest spot in your garden, but adds that the ground should never be waterlogged. Has the author never heard of the cranberry bogs in North America and seen the deliberate flooding of them? And honestly, what rush of creative frivolity led to the recommendation that they are suitable for growing in hanging baskets?

Gooseberries: according to this book, gooseberries need 800 to 1500 hours of chilling in order to fruit well. Really? What constitutes chilling? Is it temperatures below 5 degrees Celsius – 3 degrees, maybe – or below freezing? Nowhere is that information given, which means that it is very hard to start counting your hours of chill. And the huge range is questionable. Does the author mean that gooseberries require a minimum of 800 hours of winter chill below a certain temperature, but if your hours are much more than 1500 (which presumably takes you to alpine areas in this country), the growing season may be too short?

What the New Zealand reader really needs to know is that because gooseberries need a cold winter to fruit well, you are probably wasting your time unless you live in the centre of the North Island or from Christchurch southward. Measuring winter temperatures in hours of chilling is an American custom not usually seen in this country.

Avocados: the advice is that avocados do best inland away from ocean winds. This could be interpreted as suggesting that they will grow more successfully in Inglewood than Waitara, but we can tell you that in this part of the country, you can only grow avocados successfully in mild coastal areas. In fact, even in warmer areas of New Zealand, you can get frosts if you’re more than 5 kilometres inland. So in this country, avocados have to be grown in coastal areas. Again, I tracked the source of Cameron’s information to a Californian website.

The entry on lychees is lifted pretty much word for word from a copyrighted website belonging to the California Rare Fruit Growers (I started with Wikipedia and found it one click through.)

Under quinces, one of the photographs labelled quince blossom is in fact chaenomeles blossom. And while one of the photos of the fruit is indeed a quince, the other one is chaenomeles. And the photo by the quince header is, we suspect a crabapple. It is certainly not a quince. One is left with the uncomfortable suspicion that nobody involved with this book realised that quinces (cydonia) are an entirely different plant to japonica apples (chaenomeles).

I could keep going, listing the glaring deficiencies in this book. It is riddled with them. You can spend $45 on it if you wish and I am sure it will receive glowing reviews in other media because, superficially, it looks good. It is a book that was probably rushed out to meet a market demand and escaped anything but the most perfunctory of editing. It lacks rigour in every aspect. Near enough is close enough and it all looks just lovely, darling.

I don’t wish to be accused of going on a witch-hunt, but I turned back to Cameron’s earlier volume, The NZ Vegetable Garden, also published by Penguin and sponsored by Tui. I actually gave it a good review in this publication. I randomly inspected the garlic entry and went to check a rather odd piece of information. It took me all of two minutes to find a copyrighted website, http://www.garliccentral.com/varieties.html, which contributed at least some of the exact wording for page 116 in that book.

It should be an embarrassment to a credible publishing house like Penguin, but presumably nobody bothered to check for relevance, accuracy, or plagiarism. Looks are all in this current world of publishing and cut and paste has a lot to answer for.

POSTSCRIPT: My, but Penguin acted quickly to recall the book from sale. Given an advance copy of this column, they issued a recall within 24 hours.