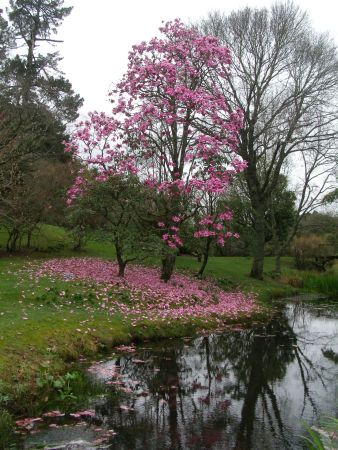 Magnolia Lanarth - now past its best

One night of rain and Magnolia Lanarth is in decline for the season. Passing over. We don’t mind that Lanarth looks a picture of perfection for such a short time but we can understand that it is a problem for people who live on small sections and who prefer prolonged flowering. 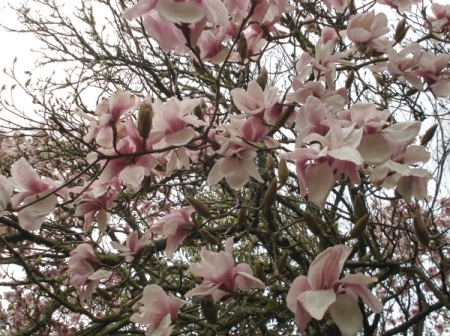 sprengeri diva - great from a distance

Campbellii has peaked too but in front of our campbellii tree, Sweetheart (a Caerhays Belle seedling raised from a Ron Gordon plant and named by Peter Cave) is just opening and is very much pretty in pink. Sargentiana robusta and various stellatas are also opening. Sprengeri diva is in full flower and looks great from afar, but floppy and a tad scruffy when viewed close up. We need more substance in blooms in our conditions with wind and heavy rain.

Michelia doltsopa is flowering around the district. The form in our park was named and released by Peter Cave as Rusty but we have never sold it. Quite simply, we think it is too large. Sure, our plant is only around 10 metres tall – but it is a good 20 metres wide. By my maths, that means that Rusty takes up around 300 square metres of land area. That is a large plant growing from a central trunk and not suckering.

We intercepted the neighbours out sniffing on a morning amble yesterday (and diverted them to coffee). All Mark’s doltsopa hybrids are coming into flower and indeed the fragrance is delicious from the road as well as in our garden. The neighbours were wanting the full on scented experience, having detected it even while driving home. 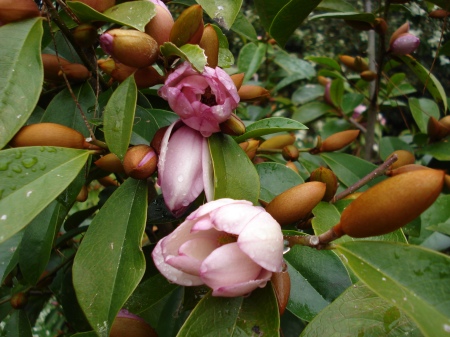 For the domestic garden, Mark’s first michelia hybrid to be released is opening its flowers. Fairy Magnolia Blush is reasonably compact (and clips well) with distinctive pinky purple flowers of reasonably large size. This cultivar is on the NZ market and will become available overseas in the next few years. 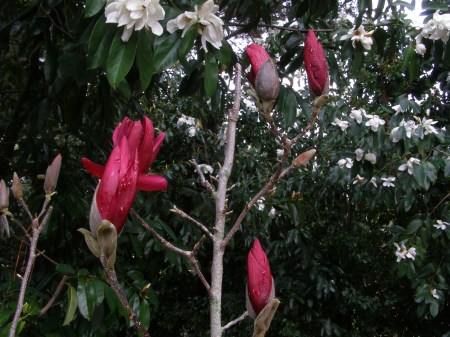 The first flowers on Burgundy Star. Doltsopa seedlings behind.

The row of stock plants of Mark’s Burgundy Star are opening their first flowers though the original plant in our carpark is hardly showing colour. In our opinion, in the proper reds Burgundy Star takes the cake so far.