All New Zealanders know the silver fern, but usually as the logo or motif, not the real thing. Sure it is closely associated with our national rugby and netball teams, but how many realise it is a ponga? A native tree fern.

Botanically it is Cyathea dealbata. New Zealand doesn’t have a world monopoly on tree ferns but we do have some special ones which are native only to our lands and the silver fern is one. It has a wide distribution through the North Island and in the north and east of the South Island. We have it seeding down in our garden in that wonderfully casual way that pongas do. It can reach as high as 10 metres but it takes a while to get there, at which point it may also measure a huge 8 metres across.

It is only silver – or white, really – on the underside of the leaf and it takes about two years for that white colouring to develop. Maori were reputed to use the white undersides to mark tracks for travelling at night although they also stand out during the day and bush walkers often know this trick.

It was TV gardening host and now National Government minister, Maggie Barry, who presented a little piece many years ago on the silver fern which falls into the “once seen, never forgotten” category. Surrounding herself with a circle of cut fronds placed pale side up, she advised us that if you are ever lost in the wild then using this technique makes you easy to spot from the air. So there you have it – a survival strategy from Maggie. 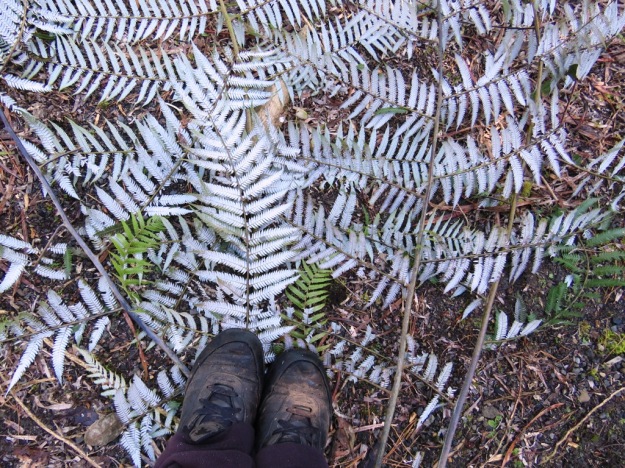 7 thoughts on “The silver fern”