There is a special thrill to seeing a plant in its natural habitat. The species are often very different to the plants we know and grow in our gardens. So it was with the reticulata camellia known as ‘lindl’ that is indigenous to the forests on Baotai Mount in Yongping County, south-west China. It may be the parent of many of the named reticulatas grown as garden ornamentals, but in itself, it is not a showy garden plant. It is a naturally occurring forest tree – and by tree, I mean anything up to 18 metres high.

C. lindl is the is the dominant indigenous reticulata camellia species on Mount Baotai.

The city of Dali in the Yunnan Province of China proudly proclaims itself as the homeland of camellias so it was only appropriate that they hosted the International Camellia Congress in February this year. Their literature claims records show that camellias have been cultivated for as long as 1500 years and based on what we saw, you would be hard pressed to find anywhere in the world where they are cultivated more extensively than in their home territory. They are a commercially significant plant – to the envy of every nurseryperson who attended the congress.

A private courtyard garden in the village of Longxiadeng

Public plantings in parks and temples featured reticulata camellias- or retics, as they are often called by camellia folk. Domestic gardening we saw was largely based around courtyards, densely furnished with container grown plants and the retics were dominant. Ordinary folk walking down the street carrying a plant home were carrying retics in bloom. We saw extensive bonsai being carried out on big old reticulatas that have been dug up and brought in to remodel in a new way.

Zhangjia Garden – a modern recreation of traditional vernacular architecture with extensive displays of camellias (10 000, apparently), almost all grown in containers in the five internal courtyards. The majority are reticulatas, as can be seen in this temporary display in a stone trough.

There is not a big range of different named cultivars. Mark, who finds interest in variety and difference, found the dominance of maybe six to ten varieties began to pall a little. Some are the same as selections seen around New Zealand, although they have been renamed by Western gardeners. There do not appear to be dramatic new breakthroughs in colour, flower form or growth habit in this branch of the camellia family.  They just are. And they are celebrated for what they are and given pride of place in the local culture.

The reticulata camellias in our garden are far more recent with most dating back a mere 50 years or so. In that time they have made small, open trees, maybe 4 metres high. Every year they flower in abundance with blooms that can be up to the size of a bread and butter plate. I mentioned the curse of petal blight in my June column and it is true that reticulatas also suffer from this unpleasant affliction. However, the sheer weight of the large blooms means that most will fall cleanly, rather than hanging about attached to the plant as the japonica camellias tend to. 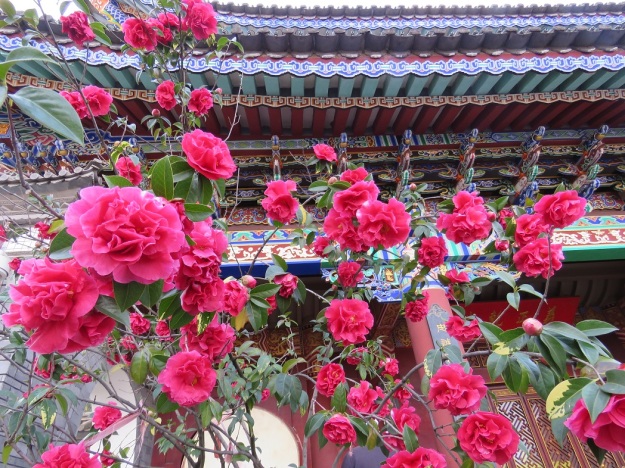 Reticulata camellias are used extensively in public plantings in the Yunnan, such as this one at a temple in Dali.

Reticulatas used to be part of the usual camellia offering in this country. Sasanquas for hedging and autumn colour, japonicas and hybrids for mass blooming from mid winter to spring and reticulatas for their big show-off blooms. Sadly, no more and that is a reflection of the downward pressure on plant pricing and the move to plants that can be more easily produced in larger numbers. The issue is that very few reticulatas grow on their own roots so they are not able to be grown from cutting.  They need to be grafted onto rootstock and they are not easy to graft successfully. The prized variegations that can give bi-coloured blooms and, at times, foliage are indicative of virus in the plants and that virus weakens plant growth and makes them harder to graft.

If you see any reticulatas offered for sale, buy one or more on the spot if you want them. You can always hold them in a container until you have their garden position prepared. You may not see them again if you wait until you are ready. The only alternative is to go back to the ways of an earlier generation and learn how to do your own grafting.

Yours truly in the Kunming Botanic Gardens (photo: Tony Barnes)

First published in the August issue of New Zealand Gardener and reprinted here with their permission.