A quick trip to Auckland at the weekend saw me rushing hither and yon but also enabled a face to face conversation with Tony Murrell in the studio at Radio Live. Usually we do these by phone. It is at the unseemly hour of 6.30am each Sunday morning so I had to rise even earlier to get to the studio. These conversations are remarkably complex for the early hour but both Tony and I are enjoying them enormously. Last Sunday it was partly about taking inspiration from other people’s gardens and not falling into the trap of thinking that recreating these ideas at home means using their blueprint, often from another climate, another country and another time. The link is here if you want to listen – it is about 25 minutes of solid gardening discussion. 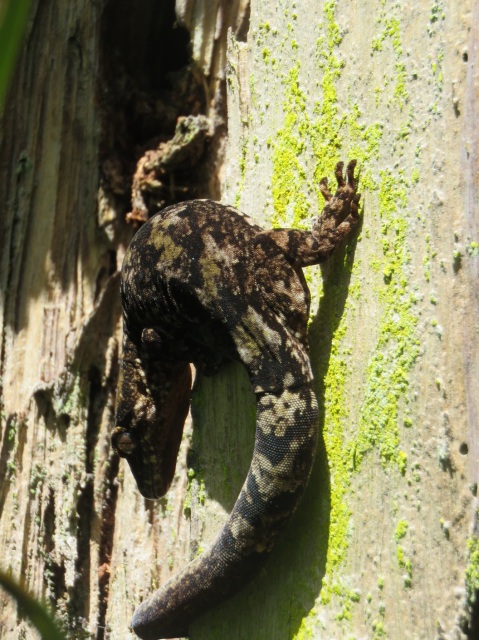 We did not see Glenys, our resident gecko, last year so were thrilled to spot her again last week. But this one is not Glenys. It is considerably smaller so our best guess is that she is the daughter of Glenys. Whether the mother is still around and we just haven’t spotted her remains unknown but having a smaller specimen this year suggests we now have a breeding population. Why do I use the female gender? Because those more knowledgeable about herpetology tell us that this is the behaviour of pregnant geckos, incubating their young. These reptiles can disappear in a flash if they are spooked so it takes quiet movements to sneak up to see. The safe haven appears to be in the fissures of the tree, beneath the bark.

The UK gardening tour I mentioned last week has done been and gorn. It rained, steadily, when they arrived which was disappointing but we moved them all indoors for tea and cakes and the rain stopped a few minutes into the walk around the garden. While hosting these tours takes a bit of work and a surprisingly large amount of mental energy, the visitors often repay the efforts in more than money.  Being able to share the garden with appreciative visitors who have a fairly high degree of knowledge themselves – albeit with an entirely different range of plants – is what it is all about really. We don’t garden on this scale just for ourselves and it can be extremely affirming to share it with a group like this one. I have to report that the lilies in the garden did not flower as hoped but we have enough lilies planted “out the back” as we say for me to pick an impressive display for vases indoors and they did not go unnoticed.

Also putting on the very best display we have ever seen here is Tecomanthe venusta.  Other plants here may be more floriferous. Indeed there are some years that T. venusta doesn’t actually flower at all, but it is lovely when it does.

Finally, a few snapshots of summer flowers I liked this weekend. I called in to Joy Plants to check out their perennials and the kniphofia in the gardens were looking marvellous.

There are times we get distinctly sniffy about both agapanthus and red hot pokers in this country but look at this scene – it was simple but lovely.

Auckland Botanic Gardens have some excellent, large scale perennial plantings which are well worth a visit at this time of the year. This yellow achillea with a compact, very dark foliaged dahlia which is opening yellow flowers was a striking combination.

Fingers crossed here for some more sun this week and it really would be awfully nice if the temperature rose a few degrees more so we were in the mid twenties, rather than barely breaking into the early twenties.