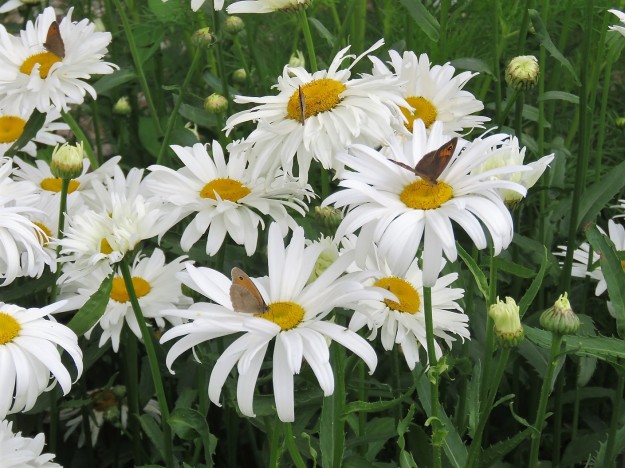 I have only seen the white garden at Sissinghurst once and, to be honest, it did not inspire me at the time. I need to go and have a second look but certainly leading English landscape designer, Dan Pearson’s comments on white gardens in general and Sissinghurst in particular, rang true for me. “Too many whites together in one space”, he wrote. Vita Sackville West called it her ‘grey, green and white garden’. Maybe over the years, more attention had been given to the white flowers at the expense of grey and green tones?  Or maybe it was just the sheer size of it and the tight constraint of all those neatly clipped hedges and edgers that did not inspire me. And the memories of all the customers I met in the trendy nineties, mostly of the Ladies Who Lunch brigade, buying plants for their white gardens. There must have been an awful lot of such gardens going into aspirational New Zealand real estate back then.

I opened my heart more to the contemporary white gardens we saw on our recent trip.  The Sissinghurst model is not the only style and it is now an historic garden from a different era. Too often the reinterpretations of Sissinghurst White can be stiff and contrived, relying mostly on clipping and rigid shrubs. Such style is not ‘timeless’. The original is historic. The copies and reinterpretations are more likely to be ‘dated’.

The white entrance to the functions barn at Bury Court. Eagle-eyed purists may note the touch of pink in Lilium regale

Bury Court,  south of London had a big wedding market – and the best setup I have ever seen to accommodate weddings and functions without compromising the essentially private nature of the garden and its residence. It was entirely appropriate that the small garden at the entry to the functions centre (a converted barn of some antiquity and great style) be white. So too were there white feature plants in strategic places which allowed for photos, but these were integrated in wider contexts of colour. The emphasis at Bury Court was on contemporary plantings of frothy or bold  perennials and grasses.

The white avenue of Epilobium angustifolium ‘Album’ at Le Jardin Plume in Normandy was an ephemeral affair – a good photo opportunity, Mark calls such plantings. Spectacular, the essence of simplicity and of brief duration, but no less charming for that on the day. 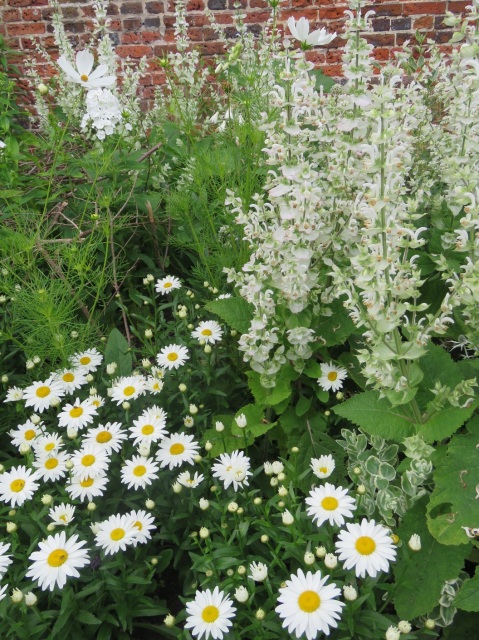 The white border at Parham

Parham House had a white border, too. Here the context was one of colour controlled, contemporary, herbaceous borders. These were generous borders, both wide and long, one in blues and another in yellows while others were mixes of hot colours. There was also rather a lot of white statuary. Similar to the smaller white garden at Bury Court, Parham’s white border is a summer feature of voluminous perennials – soft, full and lush. 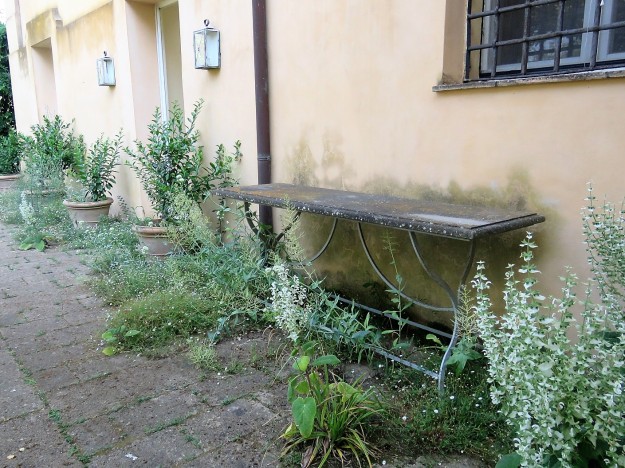 La Torrecchia, near the more famous Ninfa Gardens south of Rome, was an early Dan Pearson garden and showed a restrained use of white plants. The artfully simple self-seeding plants in the full light at the back of the villa were mostly white or grey and a delightful example of understated charm. I liked even more that the pale blue chicory was allowed to remain. The white purist would have pulled it out for failing to conform to the colour requirement but it added to the simple charm. There were plenty of white flowering plants used at La Torrecchia but not in the formal, contained style of Sissinghurst. Rather, they were spaced to lead the eye through the garden – plants used as markers for garden wayfarers.

Dare we mention that the white rose opens from yellow buds? Purity in white is rare

The pinnacle in my book is the advanced gardening skills that see the colour composition change over the seasons. We looked at Beech Grove Gardens at the Barbican in London in June (the work of Professor Nigel Dunnett and his team) when yellow phlomis, tawny kniphofia (red hot pokers) and Verbena bonariense were dominant. I was astonished to see photos of the same garden in the first week of September when it was largely white with Japanese anemones, the white wood aster (A. divaricatus) and the white barked birch trees (betulas).  It was a dramatic change to what we saw in early summer and an interesting design decision to turn a cool autumn garden to white. When you think about it, the light levels start to lower dramatically in autumn in that northerly climate, so a white autumn garden possibly shines even more.

I have never coveted a white garden myself. I have, however, recently planted a new border. Most of it is beautiful, bold auratum lilies of Mark’s raising – pushing towards 40 metres of them so that took a whole lot of bulbs. The lilies are in many shades of pinks, whites and deep carmine reds. But because they will all flower at the same time, I have added white umbellifers to flower either side of their blooming season. White umbellifers have been a hot fashion item in UK gardens for at least the last decade and show no signs of abating popularity. Think cow parsley and carrots – give or take. So far I have only put in two different ones and I still need a tall one to tower above. Plus any other white umbellifers that come my way. I just want them to seed down and gently fill the space around the lily stems. They will be my white garden.

This particular column was started as my contribution to the January issue of NZ Gardener magazine (yes, contributors are required to work some months in advance). With recent events culminating in my resignation this week, I have adapted it and decided to post it to follow on from last weekend’s work on white flowers.

5 thoughts on “White gardens for the new age”